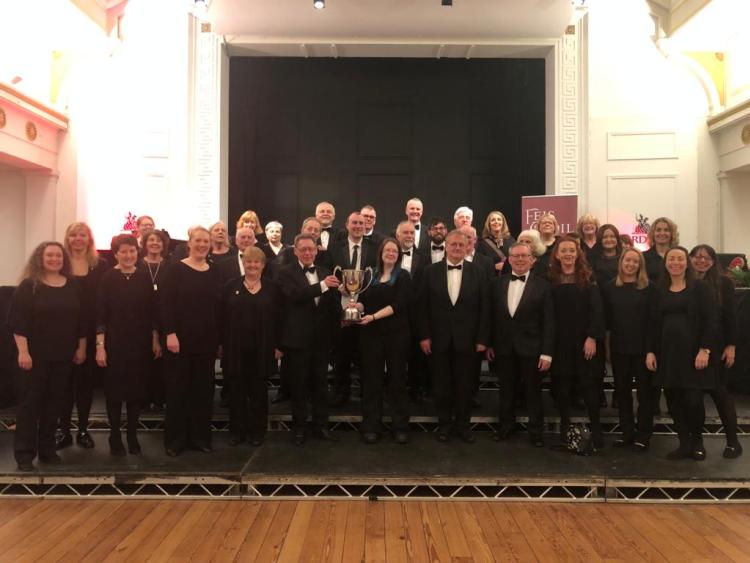 After a fantastic season in which they won the Feis Ceoil 2019 in the RDS, the Millicent Singers are gearing up for their annual Summer Concert this Sunday, 26 May in Clane Church.

Spring season brought out the best in Millicent Singers when the choir took a trip to the RDS in Dublin to compete in the Mixed Voices competition of the prestigious Feis Ceoil 2019.

The choir opened with an affecting rendition of ‘Gaudete’, as arranged by Michael McGlynn. It was an atmospheric and beautiful performance, enhanced by soloists Deirdre and Kieran.

‘Ritmo’ by Dan Davidson brought Millicent Singers’ outing to a close in spectacular style. Audience and adjudicator were mesmerised by the singing, clapping, stamping of this lively Spanish piece and were transported to Spain for a few minutes of total joy.

In his critique the adjudicator referred to the performance as a “real tour de force” and complimented the choir on performing “with great confidence and communication”. Millicent Singers were announced as winners of the mixed voice competition, Feis Ceoil 2019.

Musical director Alan Kelly, congratulating the choir had this to say: “Yet again, Millicent Singers have proved themselves to be an incredible bunch of people. Most can't read music. Most learn their music from line parts and commit it to memory. They let me guide them and steer them in whatever direction I want - and I could not be more grateful to them. This is their success. They have worked so very hard for it. Well done Millicent Singers.”

Alan also shared his thoughts on why he feels competing is important: “Winning choir competitions is NOT the best way of measuring success and many would say that you shouldn't put art into competition. But these competitions, these events give us something to work towards. To make ourselves better. To be better”.

Millicent Singers’ exciting season culminates in their Summer Concert which will take place in Clane Church on Sunday 26 May. This year they will be joined by special guests from the United States: The Lenoir-Rhyne University A Capella Choir.

Coming all the way from Hickory, North Carolina, the group is known for their amazing diversity and pristine tuning.

Speaking about the 2019 season, Alan Kelly says: “It’s an exciting year ahead for Millicent Singers, in addition to our competitions and concerts we also plan to lay down tracks for our first ever CD. With Feis Ceoil and Navan festivals before the summer we also can look forward to the City of Derry International Choir Festival in October.”

Millicent Singers would like to thank all who supported our Annual Table Quiz in Millicent Golf Club. We had a huge crowd who generously supported not only our quiz but our raffle also.

The summer concert is taking place in Clane Church on Sunday 26 May beginning at 7.30pm.

Tickets can be purchased for €15 at Marron’s Pharmacy & Hughes’ Pharmacy in Clane, McAuley Place in Naas and Sean’s Barbers in Prosperous or contact Millicent Singers on 087 2036722 or email millicentsingers@gmail.com