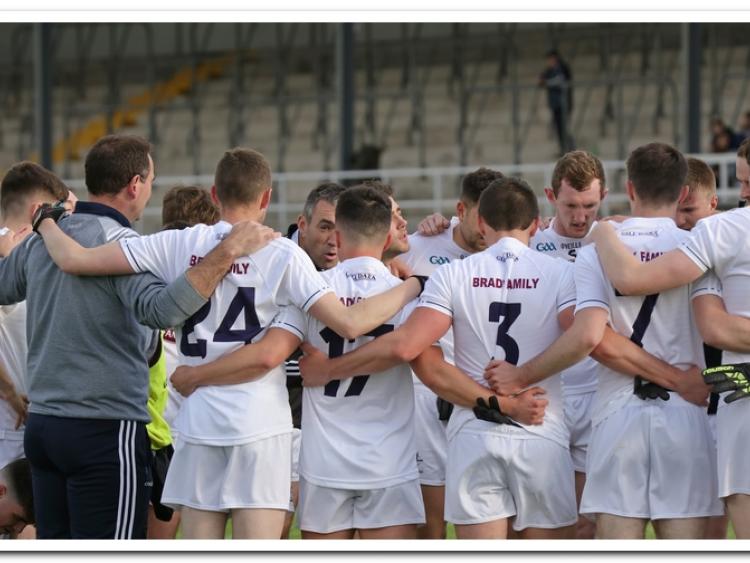 Johnny Doyle gives a rousing speech to his team mates against Longford in the semi-final. Photo: Pat Tinsley

On Sunday afternoon next, Kildare will look to capture their second successive Leinster Junior Title when they take on Meath in Croke Park.

Meath were last year’s opponents as well. After a poor start, Kildare overturned a deficit to claim a vital win.

This time around, Meath will be cheered on by a much bigger and boisterous crowd as they are also involved in the Leinster Senior Final against Dublin later in the afternoon. The Royals got to this stage by getting over Louth in Navan while Kildare overcame Longford in Newbridge.

Johnny Doyle took the headlines in that Leinster Semi-Final victory as the 41 year old came off the bench to kick three points and despite his huge reputation Kildare Manager Declan McGrath confirmed that it was Doyle’s performances for his club currently that got him on the panel and not anything he achieved in the past.

“The basis of asking Johnny in was on how he was playing for his club, just the same as any other player. It wasn’t just to have Johnny Doyle in the dressing. He was brought in as Johnny Doyle, the current Allenwood footballer. He came on there and showed what he has. His first point there was absolutely incredible, people in the stand were laughing it was that incredible”.

“He is a fantastic player and a huge asset for us. He commands a huge amount of respect, he speaks well there amongst the guys and he is encouraging everybody. It’s just fantastic to have him in there”.

While Doyle’s experience is hugely beneficial to the squad there is also some promising younger players including Padraig Nash and Jack Robinson who scored 1-8 between them in the Semi-Final victory.

“Jack Robinson and Padraig Nash are two incredible footballers and they have proven their talent all the way through the underage, and Padraig was with the seniors as well of course. They are two very talented players but I’m sure they would be the first to say that the ball they were getting was excellent, the half back line in particular were very good in getting them the ball and allowing them to do what they do, but I thought they were excellent”, McGrath admitted after the Longford game.

Nash was a member of last year’s All Ireland Under 20 side and while he recently departed the Senior Squad he is looking forward to getting back up to Croke Park.

“It’s good to get back to Croke Park and play in a Leinster Final again after the Under 20’s last year so hopefully we can do the business”.

“We know each other’s game very well and I would have played School Football with the likes of Eoghan Lawless so you can see its in sync with everyone and it really links everything”.

“A lot of the Clogherinkoe and St.Kevins lads were there last year and their experience is a huge help and the aim is to win a Leinster Title so hopefully we can do it”, Nash admitted.