Another 'Nowhere but Newbridge' sporting event as all roads lead to Ryston! 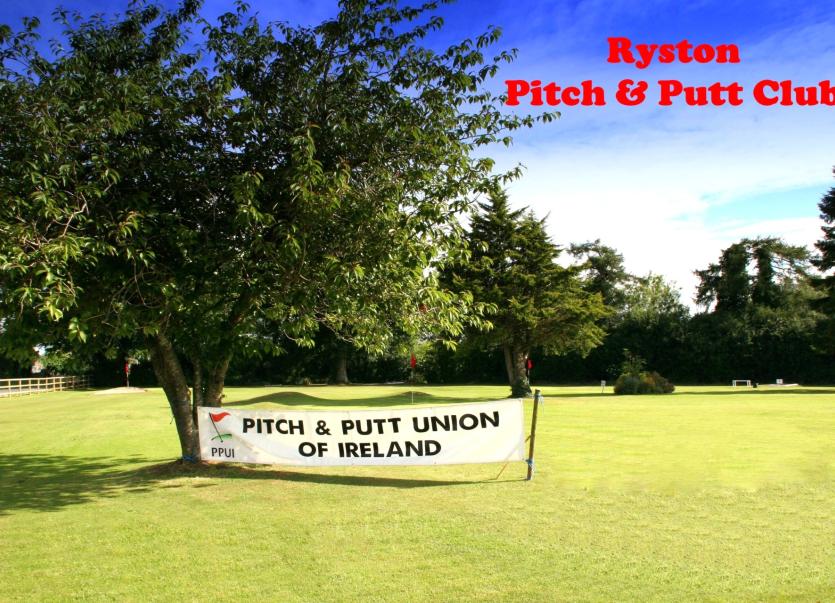 Saturday and Sunday next will see the hosting of the main play offs in the All-Ireland Junior, Intermediate and Senior Gents Strokeplay in conjunction with the Pitch & Putt Union of Ireland (PPUI) hosted at Ryston, Newbridge.

IF we only get half of the drama from 2010 on Sunday next, it will be considered another memorable National Senior Gents Strokeplay in Ryston! Communications & Press Officer Jason O’Connor (PPUI) looks over the senior field with some very interesting possibilities brewing ahead of tee-off at 8.30am on Sunday morning.

“It's scarcely believable that this time 12 months ago, Deerpark’s Damien Fleming travelled to Glenville without hardly practice following his wife giving birth only nine days beforehand. However, he would win a tight Championship in firm conditions at the Dublin venue by a single stroke with 18 under par!” wrote Jason O'Connor.

'Newbridge or Nowhere!' - the Newbridge based Ryston Pitch & Putt Club will once again host the national PPUI Strokesplay Championships over Saturday and Sunday next.  Photo Pat Tinsley

“What’s even more unbelievable is the winning streak that has followed since for the Killarney native. An Irish Open in Seapoint in August and a National Matchplay in Rocklodge give him a unique triple crown but on the Strokeplay front to enter Sunday as both Kerry and Munster Senior Champion since Rocklodge will only increase expectations about him featuring on the podium for the fourth successive year to go with the third place finishes in 2016 and 2017 at Tullamore and Tipperary Hills respectively.

“He will tee-off at 9.05am on Sunday morning alongside Thomas Ryan of Portmarnock on Sunday with no shortage of eyes and ears following his progress after the last month of success. John Walsh very nearly got the better of Damien in Listowel until that last gasp hole-in-one and the 18th at the North Kerry venue changed everything. He returns to the venue of his own drama with Eddie Carey back in 2010 over 63 holes teeing off alongside fellow former winner, 2003 Champion William Buckley Jnr, in the second session with a good knowledge of what to expect on the scoring front from the morning play. Leinster Strokeplay Champion Peter Reilly from Killineer will hope to take confidence from his win in Collinstown with a performance in a national as he tees-off alongside Barry Thornton of McBride.

“Some interesting pairings follow Reilly and Thornton as Leinster Runner-Up and former Irish Open winner Eamon Gibney plays with National U-20 Strokeplay holder Eoin Keating from Douglas while Irish European Championship winning team-mates are paired next with 2001 Champion John Cahill playing alongside Hillview’s James Cleary. After missing out on the National Matchplay, John Ross Crangle claimed the bronze medal at the Leinsters thanks to a good final round and after a string of second place finishes in this event, not least last year, he will hope to claim the Donnelly Cup once and for all on Sunday.

“Crangle will follow Fleming on the tee-box Sunday playing with Anthony Carroll from Royal Meath his playing partner for the first 36. The man who finished third last year in Glenville, Rocklodge’s Kevin McCarthy tees-off alongside St Patrick’s Dean Grannell in the third pairing in the second session.

“Last year’s Intermediate winner, Michael Kirby of Larkspur Park, plays with Thomas Lynch of Collins with Munster Senior Matchplay holder Shane Murphy playing alongside one of the local hopes in Darren Keogh. The other National Matchplay Semi-Finalist Paul Nolan of Ierne plays with a former National Matchplay Finalist himself in Sean Goggin in the second pairing of the day after Bruff’s Patsy Farrell and Glenville’s Joe Joyce (automatic qualifier courtesy of his fourth place finish last year on home turf) officially get us underway on Sunday.

“The local challenge on Sunday sees William Fitzgerald join Keogh in representing the host club as he plays with Athgarvan’s Jason Meehan. St Bridgets Ian Dillon will be expected to have a strong showing as well as he concludes the morning sessions at 10.05am alongside a player to feature prominently in the Junior event back in 2010, Aengus Coughlan of Erry.

“ Joe Ronan of McDonagh will want to go far on Sunday as well as he plays with another Erry player in Laurence Maher. John Delaney of St Bridgets meanwhile will play with Collinstown’s Darren Reilly in the first session. As per previous years there are 80 competitors on Sunday with one change seeing the 18 playoff come down to 18 players after 36 holes with play in three-balls to the conclusion creating a new dynamic.

“After some great excitement in the Ladies events in St Bridget's two weeks ago, expectations will be high of something similar in the game’s second of three big trips to the Short Grass County this year (the Inter-County in McDonagh in September being the third). There might be some big names noticeably absent but the ingredients are certainly there for it with the potential for low scoring and plenty of contenders possibly getting into the mix.  Such a scenario might create the potential for a new name to emerge on the Cup or else experience might stand to previous winners and more seasoned campaigners in claiming the title”.

Jason concluded by wishing all competitors the best in Ryston this weekend, in the three main events over both Saturday and Sunday. “It is our hope to stream some of the playoff action live on Facebook over the weekend while the usual score sheets and blog will be available on the website” he added.