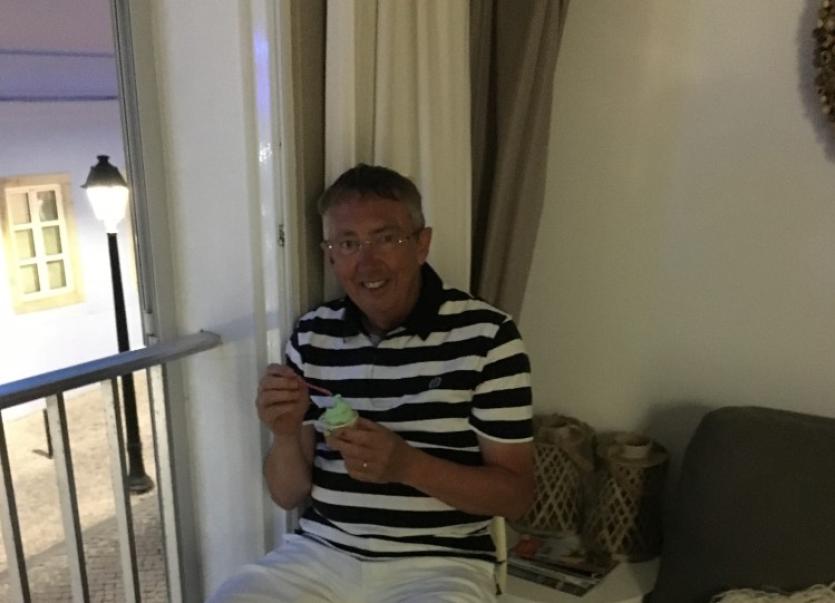 The late Christy Cummins, may he Rest in Peace

Cummins Christy, Johnstown, Naas, Co. Kildare and formerly of Doon, Co. Limerick. 19th July 2019. Suddenly. Son of the late Therese and Michael and adored husband of Ger (Petal) and loving and proud father of Emma, Laura and Michael and adored grandfather of Ailbhe. Will be dearly missed by his family, brothers Tony, Michael and Johnny, sisters Mary B, Pauline and Gilly, brothers in law, sisters in law, father and mother in law P J and Margaret Stritch, Clonlara, Co. Clare, nieces, nephews, extended family, relatives and a large circle of friends.

“Sleep dear Christy, it is sweet to breathe you name,

in life we loved you dearly, in death we do the same.”

May Billy Rest In Peace

Reposing at his family home from 3pm on Monday with rosary at 8 o’clock. Removal on Tuesday morning at 9:15am to arrive at Cill Mhuire Church, Ballymany for requiem Mass at 10 o’clock. Burial afterwards in Saint Conleth's Cemetery, Newbridge.

Reposing at his home on Sunday from 5pm to 7pm. Removal on Monday morning at 9.20am to arrive at St. Brigid's Church, Kill for Funeral Mass at 10am followed by Burial in St. Corban's Cemetery, Naas. Family flowers only please. Donations, if desired, to The Irish Cancer Society. Donation box in church.

Reposing at his home on Sunday, 21st July, from 2 o’clock until 8 o’clock with prayers at 7 o’clock. Removal on Monday morning to arrive at St. Conleth’s Parish Church for 11 o’clock Mass. Funeral afterwards to St. Conleth’s Cemetery, Newbridge.

Family flowers only please. Donations, if desired, to the Friends of St. Brigid’s Hospice, The Curragh. Donations box in the Church.

KENNY, Donal (Naas, Co. Kildare and formerly of The Square, Castlepollard, Co. Westmeath) - Thursday, July 18, 2019 - peacefully, in his 100th year, after a short illness, in the loving care of his family and the staff of Craddock House Nursing Home, Naas. Dearly loved husband of the late Rita and beloved father of Michael, Tom and Don; wonderful grandfather of Karen, Sam, Emer, Ian and Aidan, and brother of the late Mona. He will be sadly missed by his sorrowing family, his daughters-in-law Diane, Mary and Barbara, brother-in-law Larry, nieces and nephews, relatives, neighbours and friends.

May Donal rest in peace.