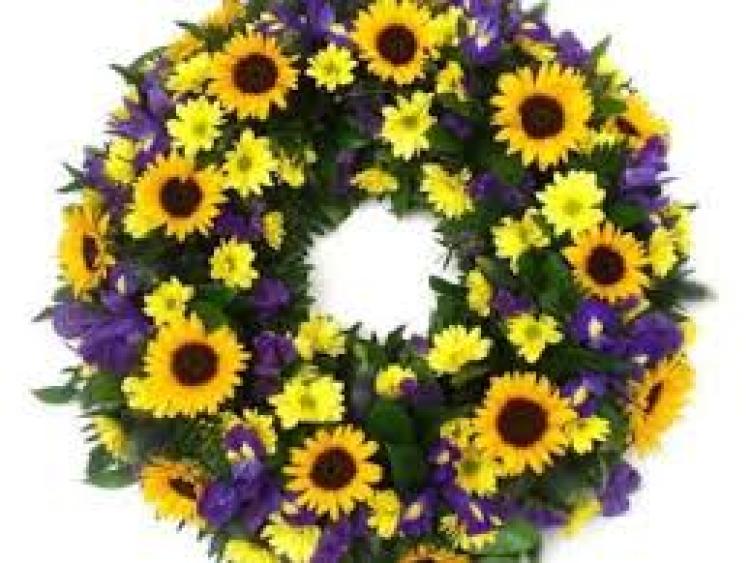 May His Gentle Soul Rest In peace.

John will lie in repose at Sweeney's Funeral Home, Louisburgh on Tuesday (July 30th) from 5.00pm, concluding with prayers at 8.00pm. Funeral arriving at St. Patrick's Church, Louisburgh on Wednesday for Mass of the Resurrection at 11.30am, followed by interment in Kilgeever Cemetery.

May Alec Rest In Peace

Reposing at his family home from 2 pm on Monday with rosary at 8 o’clock. Removal on Tuesday morning at 10:30 am to arrive at St. Conleth's Parish Church, Newbridge for requiem Mass at 11 o’clock. Burial afterwards in Saint Conleth’s Cemetery, Newbridge. Family flowers only please. Donations if desired to “the Friends of Saint Brigid's Hospice, the Curragh. Donations box in church.

Reposing at Oliver Reilly's Funeral Home, Woods House, Clane on Monday from 4pm-8pm with prayers at 7pm. Removal on Tuesday at 10:30am to arrive at St. Brigid's Church, Straffan for 11am Funeral Mass, followed by burial in Straffan Cemetery.

Reposing at Rigney's Funeral Home, Athy on Sunday from 6pm with rosary at 8pm. Removal on Monday morning at 10.15 to arrive at The Church of St Laurence O'Toole, Levitstown for Requiem Mass at 11am. Burial afterwards in the adjoining cemetery. Family flowers only. House private please.

May Francis Rest in Peace

The death has occurred of Con Whiteley
Piercetown, Newbridge, Kildare

Reposing at Glennon’s Funeral Home, Eyre Street, Newbridge from 3 o’clock on Sunday, with Rosary at 5pm. Removal on Monday morning at 10.30am, to arrive at St. Conleth’s Parish Church, Newbridge, for Requiem Mass at 11am. Cremation afterwards in Mount Jerome Crematorium, Harold’s Cross.

Family Flowers Only Please. Donations If Desired To The Irish Cancer Society.