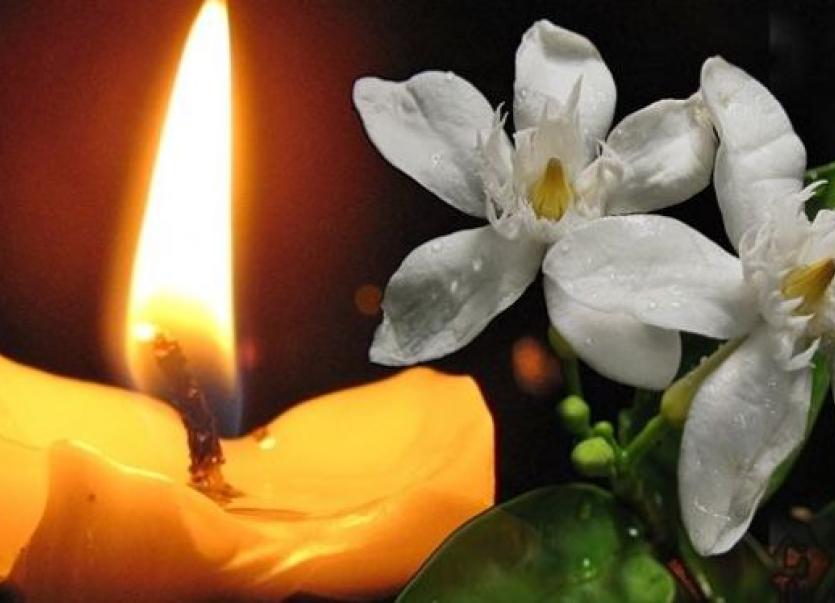 Reposing at the George Mullins Funeral Home, Kilcullen Road, Naas on Wednesday from 5pm with Prayers at 7pm. Removal on Thursday morning at 9.30am to arrive at The Church of Our Lady and St. David, Naas for Funeral Mass at 10am followed by burial in St. Peter's Cemetery, Two Mile House, Naas.

The death has occurred of Patrick (Paddy) Hannigan
Leixlip, Kildare

Reposing at his home on Tuesday evening (August 27th.) between 6 o’c and 8 o’c. Removal on Wednesday morning (August 28th.) to The Church of Our Lady’s Nativity, Leixlip arriving for Requiem Mass at 11 o’c followed by burial in Confey Cemetery. Family flowers only, please. Donations, if desired, to Croí, Fighting Heart Disease and Stroke.

Reposing at his home on Wednesday afternoon (28th August) from 1.00pm prior to removal to the Church of Our Lady’s Nativity, Leixlip on Wednesday evening arriving at 6.00pm. Requiem Mass on Thursday morning (29th August) arriving for Requiem Mass at 11am followed by burial on Confey Cemetery, Leixlip. Family flowers only please. Donations, if desired, to The Irish Heart Foundation.

Reposing at her home Pagestown (A85 X635) on Wednesday from 5pm to 9pm. Removal on Thursday at 11:15am to the Church of St. Oliver Plunkett, Kilcloon arriving for Funeral Mass at 12 noon followed by burial in the adjoining cemetery.

Reposing at his residence on Tuesday from 4-9pm, with prayers at 8pm. Removal on Wednesday at 10.30am to arrive at St. Mary's Church, Maynooth for 11am Funeral Mass, followed by burial in Kilcloon Cemetery, Co. Meath. Family flowers only please. Donations, if desired, to St. Francis Hospice, Blanchardstown. House private on Wednesday morning please.

May Seamus Rest in Peace

Reposing at Clarke’s Funeral Home, Burgage More, Blessington (W91YN79) on Tuesday from 4.00 p. m. to 7.00 p.m. Removal on Wednesday to the Church of the Immaculate Conception, Ballymore Eustace arriving for 11.00 a.m. Funeral Mass followed by burial in St. Mary’s Cemetery.