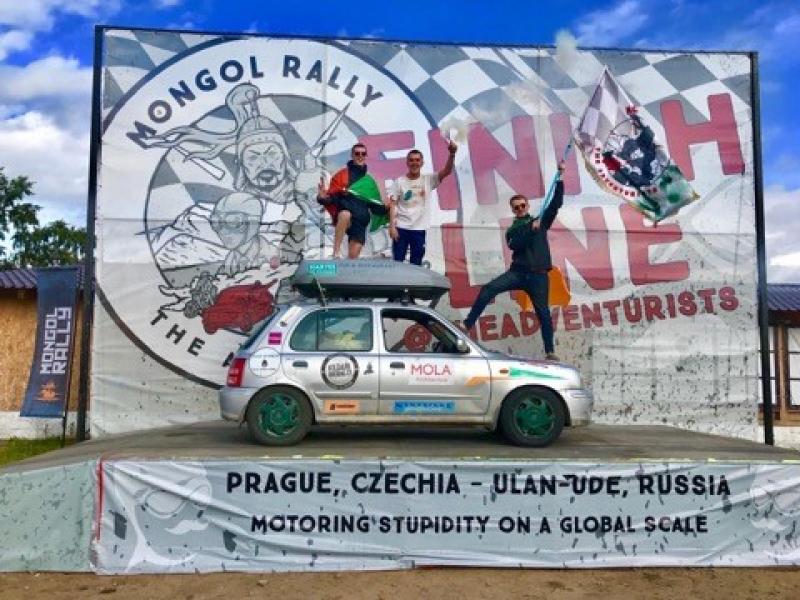 Team 'Mon-We-Golia' Cian Rea, Paddy Kavanagh and John Finn from Co Kildare are on the adventure of a lifetime! Pictured at the finish line at Ulan Ude, Russia

Three Co Kildare lads have now completed their exhilarating journey across Europe as part of the Mongol Rally, having crossed the finish line in Ulan-Ude in Russia yesterday, 14 September.

The challenge is sponsored by local businesses including Clark Recruitment. The lads are going by their Team name of 'Mon-We-Golia'.

The three friends are all aged 23 and have been friends since childhood, also having attended secondary school together at Newbridge College. The Mongol Rally is an international charitable rally which involves driving 10,000 miles from Prague to Mongolia in a 1 litre engine car, with thousands of participants coming from across the globe.

Speaking to KildareNow this week, Cian, John and Paddy said that they have enjoyed their journey. 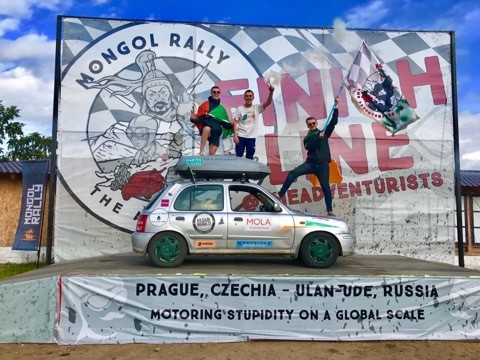 Team Mon-We-Golia at the finish line in Ulaanbaatar, Mongolia, yesterday

The lads commenced the challenge on July 22 and they have travelled through Europe, Iran, Turkey, and more. They also visited the ‘Gates of Hell', a fiery crater burning in the Karakum Desert in Turkmenistan, which was a highlight of their journey and they also enjoyed the hospitatility offered by locals in Iran. 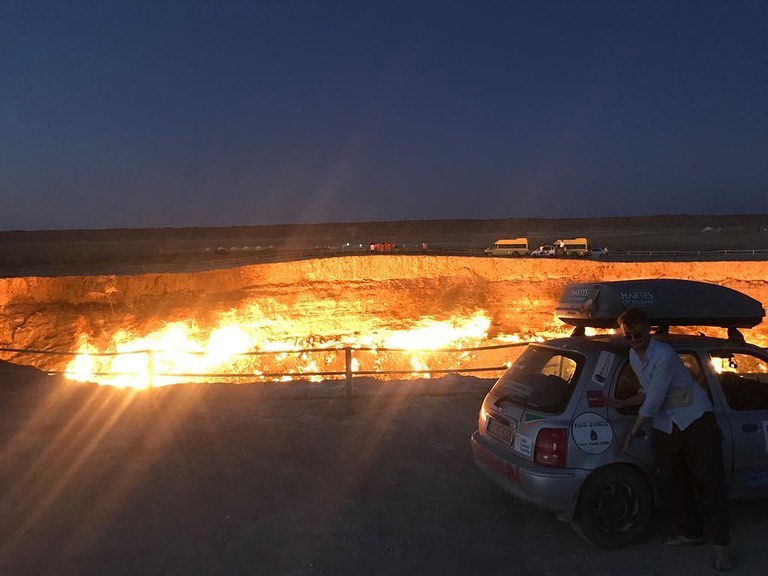 Team Mon-We-Golia at the 'Gates of Hell' in Darza, Turkmenistan

“Iran was incredible. Hospitality of the locals would put the Irish to shame. Everyone was delighted to see foreign tourists in their country. We were invited into peoples homes, had meals in restaurants paid for by other patrons, constant waves and photos. Food and gifts passed through our windows and on the streets. We also loved the Pamir Highway. Incredible scenery. Bordering Afghanistan in parts. It’s is the second highest highway in the world, peaking at 4655m,”said Cian Rea. 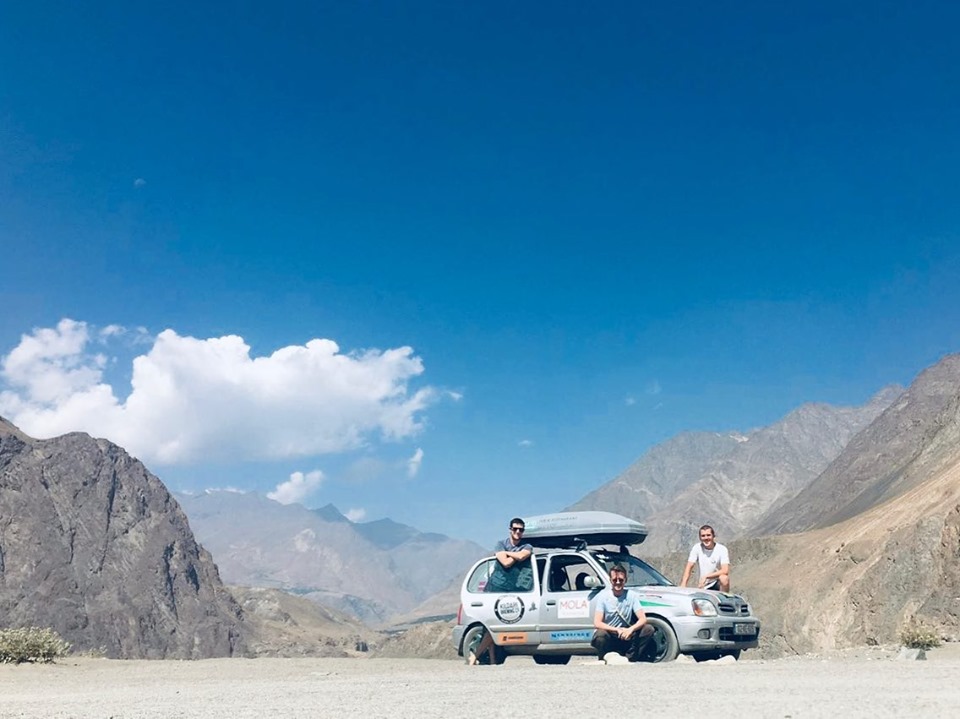 Team 'Mon-We-Golia' at the Pamir Highway 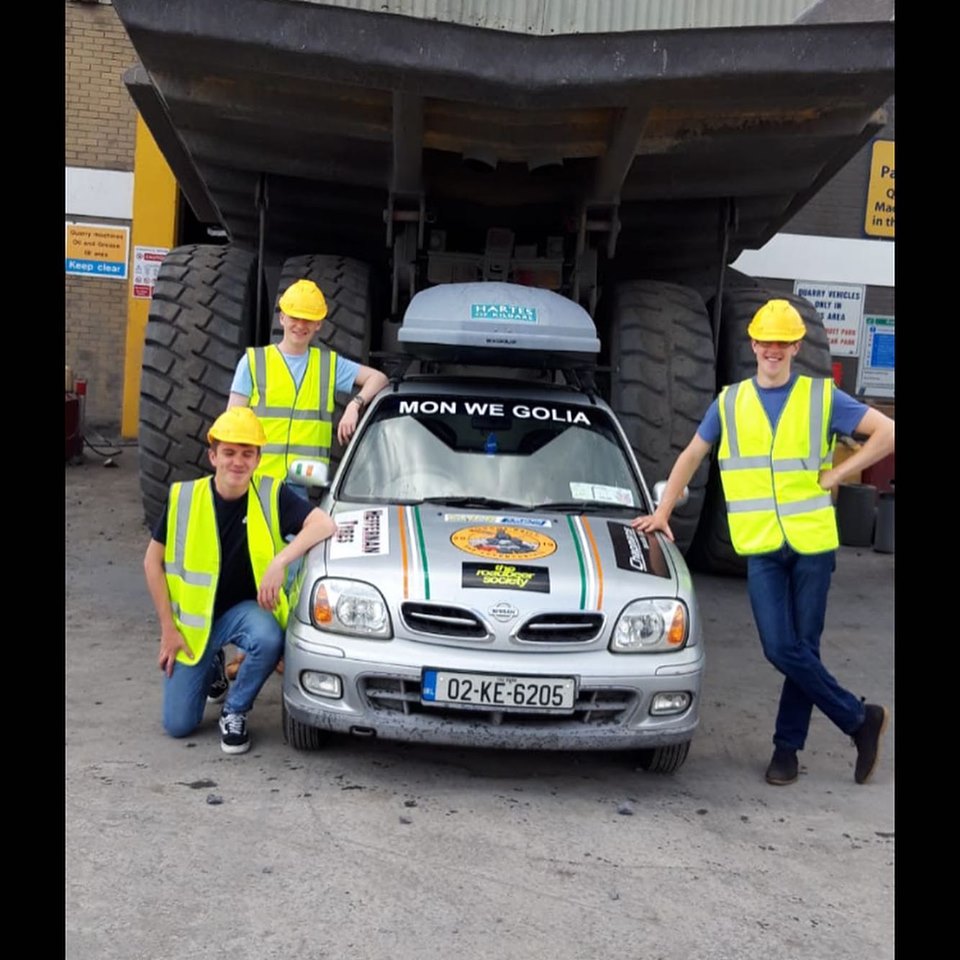 The team had a few hiccups along the way including a flat tyre, but they've enjoyed the journey!

It’s been mostly smooth driving for the lads until they reached the Pamir Highway, after which they discovered a crack in their break line at the and had to drive around 150km with little to no brakes

“Some of the roads in Mongolia were very bad which resulted in our one and only flat tyre of the trip and we also smashed our passenger window - this meant that we got covered in dust until we had it replaced. We have had overheating issues and our airbag light is flashing, other than that everything is perfect.”

Meanwhile team Mon-We-Golia also met up to convoy with teams from New Zealand and the UK on their travels. “Everyone is very up for the adventure. There’s are teams from all over the world. They are all mad enough to take on this challenge so we all get along very well!” explained Cian.

The Kildare friends crossed the finish line yesterday, Saturday 14 September, and they also attended a launch party on the night with all of the other teams.

So what’s next on the agenda for the these three adventurous Kildare lads?

“Audrey is still running and we haven’t killed each other yet so we are planning to continue driving through Russia and get a ferry to Japan to follow the Irish team at the Rugby World Cup. Let Rory and the team know we are on the way!”

Team Mon-We-Golia has currently raised over €6500 for the Irish Cancer Society and their gofundme is still active for anybody who would like to donate, with 100% of donations going to the charity.