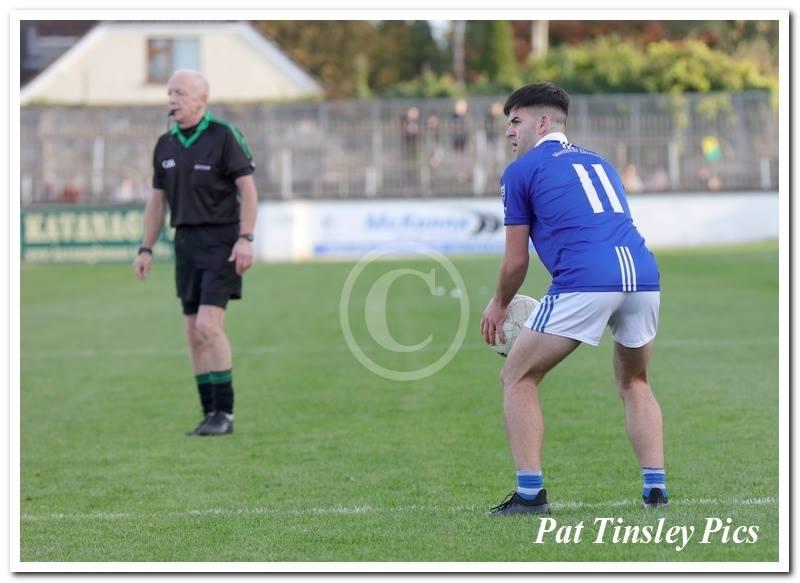 Monasterevan are into their second successive Intermediate Football Final after they defeated Clogherinkoe in an intriguing last four affair on Saturday afternoon.

Coming into the tie a lot was expected with two of the better teams in the competition facing each other and while it wasn’t high scoring it was still very absorbing.

Padraig Nash despite going off injured and looking like he was on one leg for much of the game kicked 1-2 and his impact near the end of the game was crucial with himself and Paul Maloney causing Clogherinkoe problems.

While they were the score getters it was further back in the defence that they really performed with the likes of John O’Toole and DJ Earley putting in big performances to curtail a big Clogherinkoe threat.

Both teams goals came from penalties with Nash and Mark Nolan on target but it was the case of a missed chance for Clogherinkoe as Nolan had a glorious opportunity to put them five clear when breaking clear in the second half but he kicked his effort wide and from there Monasterevan turned the screw.

The normally reliable Jack Robinson kicked a couple of early wides for Clogherinkoe but that didn’t affect the side too much as they were 0-2 to 0-0 ahead by the 7th minute with points from play by Cein McMonagle and Daniel Grehan.

Monasterevan replied with a well taken effort from Eoin Stapleton but the Clocks maintained their early dominance with points from Robinson and Mark Nolan.

The longer the half went on the more last years beaten finalists got into it and after Paul Maloney reduced the gap for Monasterevan the same player had a chance for goal when a long inside ball from Padraig Nash fell over the head of the centre forward but his palmed effort went wide of the goal.

Clogherinkoe took advantage of that miss with Mark Grehan kicking his side three clear but again Monasterevan hit back with scores from Ryan Bannon and Nash to level up the game for the first time.

The Blues couldn’t hold out till the break though with Robinson scoring in stoppage time to leave Clogherinkoe 0-6 to 0-5 in front.

Clogherinkoe pushed ahead at the beginning of the second half when Mark Nolan won a ball on the endline in the 36th minute and after being pushed when shooting he won a penalty which he duly slotted home.

Just the three minutes later the ball was in the net down the other end when another spot kick was awarded after Paul Maloney was fouled and Nash made no mistake to leave just a point between the sides.

Maloney then kicked a shot wide afterwards but Clogherinkoe were keeping their noses in front and sub Ciaran Gravin extended that advantage in the 49th minute.

Despite their two point lead at that stage Clogherinkoe’s buffer wasn’t a safe one and they had a chance to put the game to bed when Mark Nolan raced through but with the goal at his mercy he shot wide.

Clogherinkoe only scored one more point from there on with John O’Toole especially getting to grips with the elusive Robinson as the Blue wave emerged.

Bannon firstly with a free and then sub Kevin Mulpeter levelled the game at 1-7 each before Nash kicked a wonderful point to give Monasterevan the lead entering stoppage time.

With only a point between them Clogherinkoe had a threatening attack but a wonderful interception from DJ Earley eventually resulted in Bannon kicking the insurance score.