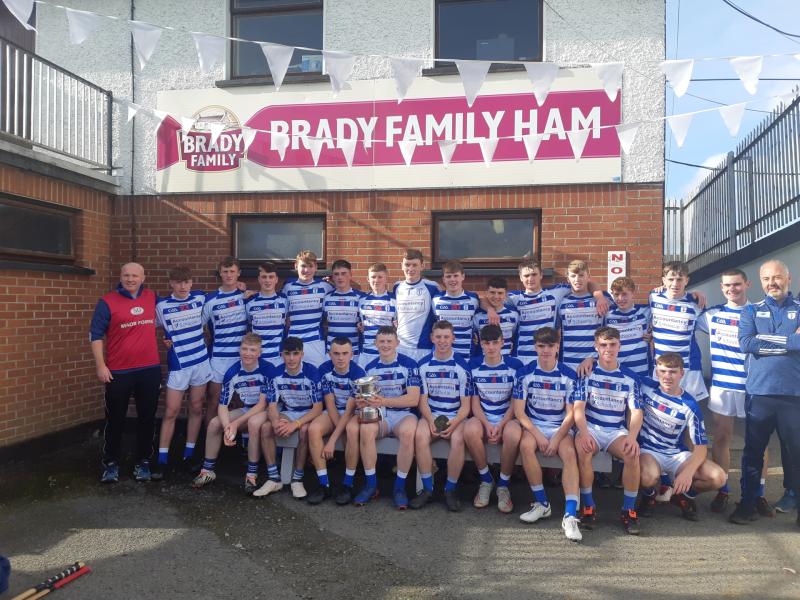 Its back to back Minor Hurling Titles for Naas as they achieved a rather comfortable victory over Maynooth in St.Conleths Park on Sunday afternoon.

Naas goals in the opening half from Charlie Sheridan and Dermot Hanifin meant Maynooth were always chasing and despite fighting back in the second period they left themselves with too much to do in the end.

In Cathal McCabe and David Qualter Maynooth had two stars of the Kildare Minor team that reached a Leinster Semi-Final but they were playing a lone furrow for large periods of the contest.

Its just another success at underage level for Naas as they continue to sweep all before them and a couple of the players on show will look to do a Hurling and Football double in a couple of weeks.

It took less than sixty seconds for the first point to be registered on the scoreboard with Naas opening their account when dual star Dermot Hanifin split the posts.

Maynooth responded with a Cathal McCabe effort from distance and the wing forward doubled his tally a couple of minutes later to offset a score for Naas from Conan Boran.

After David Qualter missed a free for Maynooth, Naas took command with 1-3 without reply as a pair of Liam Walsh converted placed balls came either side of a Matthew Whelan score from play.

The opening goal of the game then arrived when Dermot Hanifin won a ball inside and drilled a shot past Gearoid Hogan to give his side a six point lead.

Maynooth battled back with a pair of Qualter frees but Naas practically put the game to bed before the break with a Charlie Sheridan goal where he found the net on the second attempt after an earlier effort was saved by Hogan.

It was frees from there till the end of the half with two more Walsh attempts for Naas going over as well as McCabe’s third of the half and as a result Naas went 2-7 to 0-5 ahead at the change of ends.

Maynooth kicked off the second half with a point from distance by McCabe to reduce the lead to seven but back to back points from Walsh and Hanifin soon extended the Naas advantage.

McCabe and Rossa Stapleton exchanged points as Naas led 2-10 to 0-7 but they were soon suckerpunched when a Shane Whyte goal gave Maynooth a lifeline.

David Qualter knew that a goal was needed if Maynooth were to get back in the game and he went for the three points with successive frees but both were saved by Sean Burke and fortunately for the Moyglare Road outfit the latter’s attempt was driven in by Whyte on the rebound.

Maynooth had real momentum at that stage and they had a chance to get back within three points when Ray Kelly awarded a penalty for a foul on             Adam Jordan but Qualter’s shot was expertly saved by Burke in the Naas goal.

Naas soon refound their groove and three points in a row put the game beyond Maynooth with Stapleton, Walsh and Enda O’Neill all scoring.

The game petered out from there till the end with Walsh and Adam Jordan exchanging scores as Naas made it a League and Championship double.