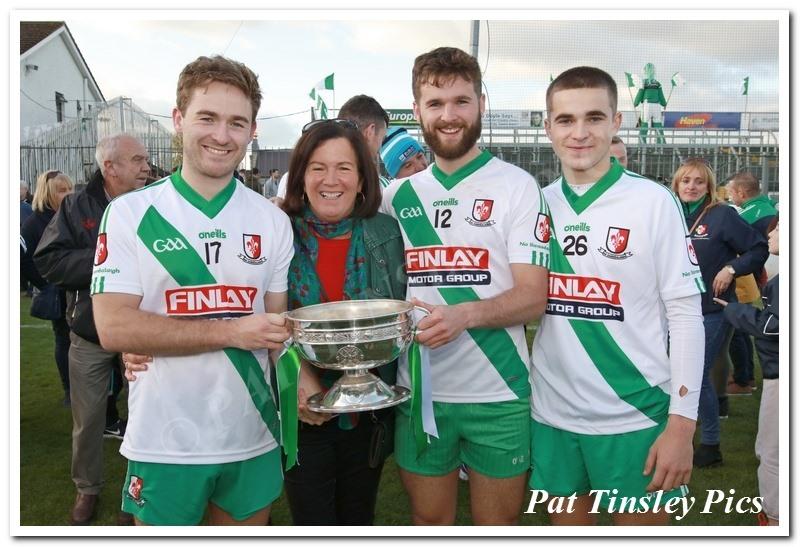 Conor Hartley was one of the young fledglings to appear from hugely talented Sarsfields Minor and Under 21 teams a couple of years ago but now in a strange way he’s no longer a kid.

Hartley was a member of the Kildare Senior Football Squad this year and with so many under 21 players on the Sarsfields side he is something of a more experienced head alongside the likes of Shea Ryan, Ben McCormack and Con Kavanagh.

It was no coincidence though that the quartet mentioned above played a starring role in the win over Moorefield.

“With Moorefield its always going to be tough as they are a great side and they have been the team to beat the last few years so we knew we were going to get it tough and that’s exactly what happened. Even when we were six points up I knew it wasn’t over and even with the two late penalties you were just holding on at the end but thankfully we stuck it out.”

“A few years ago when we won it there was a lot of young lads but it’s not like that anymore as from being 18 or 19 we are now 22 or 23 and we just try to stick to the gameplan as we know they are going to score as they are a great team but its how we responded was the important thing”.

“Whenever you play Moorefield you want to win as they are a great side and three in a row is the only thing we have over them as we don’t have a Leinster and its great to hold on to that but I’m sure we’ll see them again”.

A good start is always key and Sarsfields got that when leading 0-5 to 0-1 early on but their main aim was to stop Moorefield getting goals and while it didn’t quite transpire like that they did manage to get a handle on their opponents for long periods.

“After the last day we were definitely the happier ones and when it went into injury time you were thinking that was it but Barry Coffey managed to pull it out of the fire and even just looking back on the video we made a lot of uncharacteristic mistakes which we usually wouldn’t so there was still a lot of room for improvement so we knew if we tidied up there we would be in a good position”.

“We did look for a good start and just to stop them scoring goals as the two in the first game were a killer for us and it made it very hard for us to get back into it so we tried to keep them out for as long as we could and I know they got one in the end but we managed to stick to the game plan and we got out in the end”, Hartley said.

Sunday was also a hugely emotional day for everyone involved with Sarsfields after Anne Nolan Dempsey had passed away the night before. Anne was the mother of Sean who had played with the club previously and Hartley made a point that she was always in their minds.

“We had Anne in our thoughts and we mentioned her a few times before the game and we were playing for her out there and Sean Dempsey is a great lad and he was here today”.

“We weren’t expecting him to be here at all and even seeing him gave us the lift we needed”.