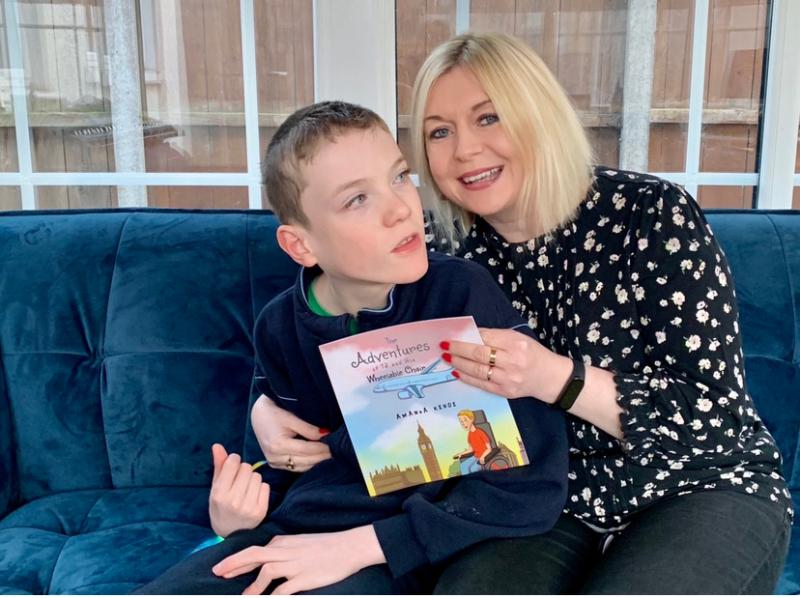 Newbridge based author Amanda Kehoe with her son Tadhg

Newbridge-based author and mum-of-three Amanda Kehoe has published the second book in her hugely successful series ‘The Adventures of TJ and His Wheelable Chair’ which is inspired by her young son’s health journey.

Amanda grew up in Ballinteer in Dublin and she currently lives in Newbridge with her husband Greg and their three children Emily, Tadhg and Dylan. Amanda worked for several years in Marketing and she is also a qualified Montessori teacher and SNA.

However, Amanda took a seven year career break to care for her son Tadhg on a full-time basis after he was diagnosed with Cerebral Palsy and Global Developmental Delay in March 2009, at the age of 10 months.   She was inspired to write ‘The Adventures of TJ and his Wheelable Chair’ which is based on to her son Tadhg’s life with the condition and to encourage awareness amongst other children in schools. T

The first book in the series ‘TJ and His Wheelable Chair’ is published by Austin Macauley Publishers and was released in 2016.

Amanda explained that the inspiration behind her popular children’s series is her young son Tadhg. “The inspiration for this book, like the first book, is my 11-year-old son Tadhg (TJ) and this time he takes the reader on an adventure where he travels to London and visits the zoo and also goes to a concert later at night.  This book is about sharing TJ’s experiences with his readers and hopefully they will enjoy the adventure he takes them on,” she explained.

The official publication for the book was 28 February and it should be available to purchase in Kildare shops in the coming weeks.

Amanda has said that she is hopeful that the second book in the dazzling series will create discussion and awareness about disabilities, with the particular aim of encouraging children to ask questions.

“I am hoping with this book it will open up more discussion and create further awareness.  Because TJ is both physically and intellectually disabled, I feel it’s important to show that his disability doesn’t stop him from having fun or enjoying similar experiences to everyone else, he may need more assistance but he gets the same joy from being involved and sharing these adventures with his family and friends," said Amanda.

"I remember being asked at one of the school visits I did with my first book, how TJ could get on a plane with his wheelchair so I felt by writing about a journey, it would help children to further understand the logistics around travelling when you have a wheelable chair and how TJ manages with the help from his Mum and Dad."

Amanda is planning on arranging some events through her publisher with schools and book shops and she is available for any school readings if anyone wishes to get in touch. “I haven’t arranged an official launch just yet, but I plan to do so in the coming weeks. I am just so thrilled to have finally released my second book and to share it with everyone and I really hope everyone will enjoy TJ’s adventures!” she said.

And when can we next expect book three in the popular children’s series?

"I am always thinking of the next book and I’ve scribbled down a few ideas but nothing concrete yet.  I am hoping that TJ’s next adventure will include his lovely companion dog Jaco so I’m slowly working on that at the moment,” said Amanda.

‘The Adventures of TJ and his Wheelable Chair’ will be available to purchase in Kildare shops in the coming weeks and it is currently available to buy on Bookdepository.com and amazon.co.uk.