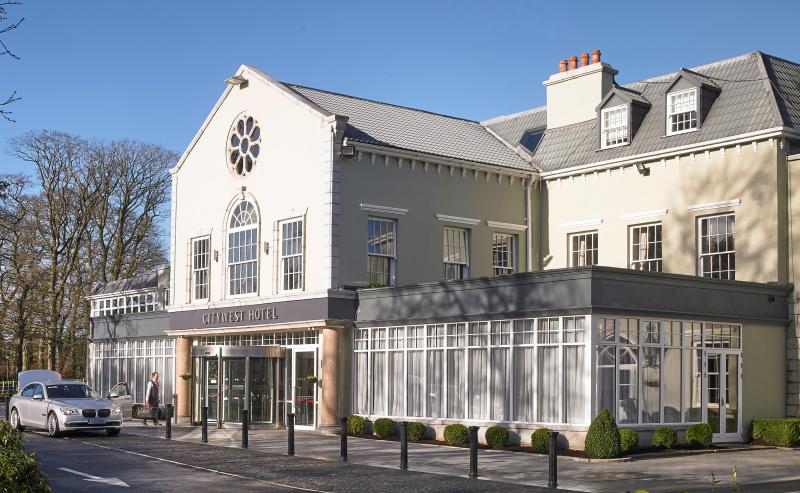 The owners and operators of the Citywest Complex have secured a temporary High Court injunction against a man they claim has disrupted the HSE's plans to use part of the West Dublin facilities for those who need to self isolate during the Covid-19 crisis.

The application was brought Cape Wrath Hotel unlimited and Alva Glen Land Developments Ltd against Mr Donal Burns, who the High Court heard holds a lease for a suite at the Golf Hotel Building, which forms part of the complex that contains a hotel, golf course, and convention centre.

That particular building in Citywest has been derelict since 2009, and the court heard has not fit for human habitation.

However in light of the recent covid-19 emergency the two firms have entered into various contracts with the HSE to provide isolation and a step-down facility at the complex for those convalescing from the virus.

Citywest will be used by the HSE as place to treat those who contract Covid-19 but do not require to be hospitalised, and for those who need to but for various reasons cannot self isolate.

At the High Court on Tuesday Eoghan Cole Bl, instructed by solicitor Aonghus McClafferty of Eversheds, for the companies said the owners are in the process of renovating the Golf Hotel building so it, along with other parts of Citywest, can be used by the HSE.

His clients own 73 suites in the Golf Hotel. Counsel said that the previous owners of Citywest had sold leasehold interests in 66 suites at the Golf Hotel  to individuals, including Mr Burns, from which they were to get a rental income.

The company that ran the Golf Hotel was dissolved in 2009, years before the plaintiff companies took over Citywest in 2014.

Suites in the Golf Hotel will only be made available to the HSE with the express consent of the owners who will be remunerated for their use, counsel said.

Mr Cole added that there had been difficulties with other suite owners,  in the past, resulting in separate High Court proceedings, where efforts aimed at resolving those disputes remain in being.

Counsel said Mr Burns, of Spawell House, Coolmine, Saggart Co Dublin has in recent days entered onto the hotel site, and has acted in a matter that is disruptive to the works being carried out on the Golf Hotel Building.

Mr Burns, the court also heard had stated in an email that he planned to move his elderly mother to the suite he acquired an interest in - Suite 313.

Counsel said that under the terms of the lease agreements the holders cannot use the suite for anything other than apart-hotel units as part of the overall operations of Citywest complex.

Counsel said Mr Burns, who it is alleged has been accessing the site in recent days despite the lockdown, is not entitled to occupy the suite himself or allow it to be occupied by any other person.

However extensive works need to completed in a situations where counsel said "time is of the essence, " and Mr Burns presence is disruptive to the works being done so that the building can be used by the HSE.

Arising out of his alleged recent actions the two companies secured an interim injunction restraining Mr Burns from entering the any part of the complex unless authorised by the two firms.

The order specifically prohibits Mr Burns from occupying or allowing Suite 313 of the Golf Suite, in Citywest to be occupied.

It further restrains Mr Burns or anyone who has notice of the order from obstructing or interfering with the both the owners' operation of the facilities and the HSE's activities on the complex.

The injunction was granted, on an ex-parte basis, by Mr Justice David Barniville, who said that he was satisfied to make the orders sought based on the evidence before the court.

The Judge said he was adjourning the matter to April 21, which he said was a longer period than would usually be the case.

This was because he did not want to be bringing people to court during the current national medical emergency.

The judge added that he  was conscious he had heard only one side of the dispute, adding that it was open to both sides to make whatever arguments they want when the case returns before the court.

The Judge also gave the defendant, should he desire, liberty to apply to have the injunction lifted on 48 hours notice to the plaintiffs.