Merv's last-minute dash to get back to Ireland 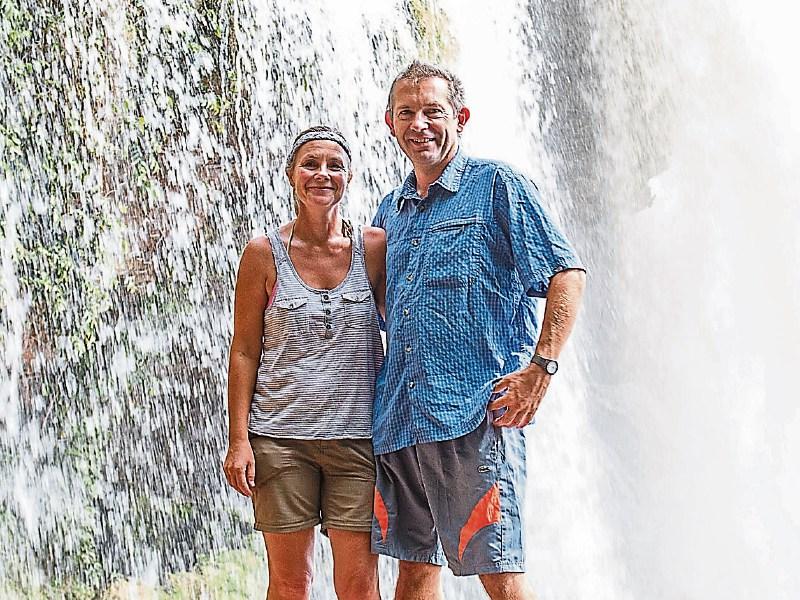 Merv Colton and his wife Sarah pictured on a previous trip

In August 2011, Kildare man, Merv Colton set off on an adventurous two and a half year trip around the world with his wife Sarah — but earlier this month he added to the excitement when he had to make a mad dash in north Spain to get home before the Covid-19 shutdown.

The Straffan based IT consultant recalled his break this week when he had to make a dash across the Picos de Europa in mountains to catch a ferry back to Ireland.

He took his motorcycle across to Santander in Spain on, March 5, via the UK, where he and others planned to spend a short time with travel writer and author, Helen Lloyd, (Desert Snow: One Girl’s Take on Africa By Bike and A Siberian Winter’s Tale) who was beginning a long trip. “There were no strong signs or signals that Spain was going to be the next Italy, or I would not have gone,” said Merv.

His wife, Sarah, along with others, was planning to meet them in Porto.

His trip was a holiday, riding a motorcycle on the Spanish section of the Trans Europe Trail.

“As it's all off road through remote regions, we saw very few people. Each day we saw on social media that the situation was getting much more serious, so I brought my return ferry forward to Thursday, March 19.”

But with talk of a lockdown, Merv got rebooked on the Sunday (March 15) sailing out of Bilbao direct to Rosslare.

They left Porto around 4pm on Saturday, March 14 for a sailing due to depart the next day at 12.00 noon. But the ride to Bilbao was going to be a bit of a dash, to say the least. “The ride across the north of Spain was a strange one as we saw no one for a spell of two hours except for a dog and a wandering horse.”

At 23.00 it was so cold in the Picos mountains — they had used tents in previous days — that they booked into a converted monastery, getting up to be on the road at 7am on the Sunday morning.

Merv made it: “Once on the ferry, anyone with a cabin disappeared, only to be seen again when we disembarked. Brittany Ferries were good, all surfaces that people would touch were regularly wiped down, and everyone without a cabin sat far apart.”

He was glad to be home.

In August 2014, Merv and wife, Sarah Cooper, returned from a 30 month world trip in a former German army vehicle, known as the Moglander. They spent most of the time — over two years from Stephen's Day in 2011 to August 2014 — in South America, taking in the Antarctic and the grave of Ernest Shackleton, the Galapagos Island, Venezuela, Colombia and Brazil.