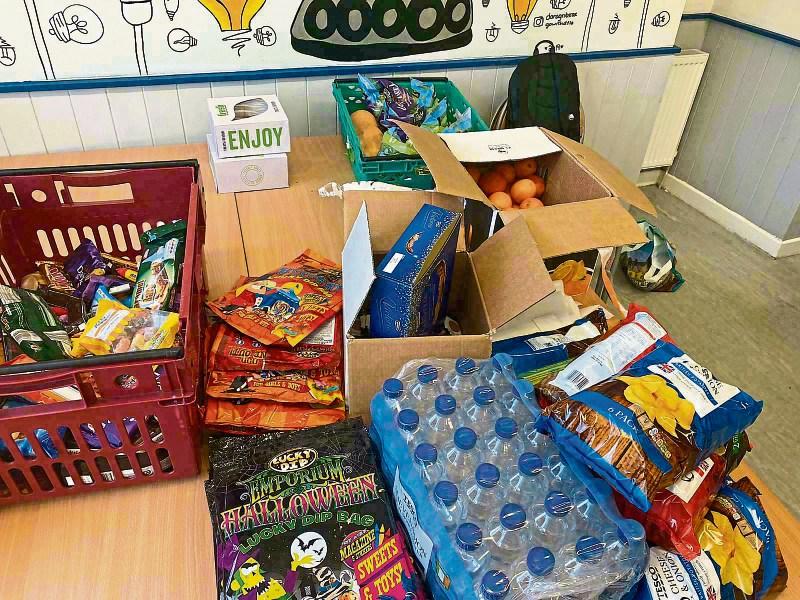 Some of the donated items

The generosity of people to support a food service to the homeless never ceases to amaze, Aubrey McCarthy told the Leinster Leader.

After No Buck’s Café which feeds up to 180 people per night in Dublin ran out of sweet treats, Mr McCarthy made an appeal to neighbours in the Broadfield-Punchestown area, and was astonished at the speedy and generous response.

“We are feeding an average of 170-180 people per evening,” said Mr McCarthy. “We adhere totally to the Covid-19 guidelines and those seeking our services are respectfully adhering to the two metre distancing. We have perspex screens to reduce the risk to our staff and to the diners.

“But we had run out of treats to put into the take away boxes. I put a mention in our neighbourhood Whatsapp group here at Punchestown-Broadfield stating I’d put a hand luggage case on the gates at The Elms and if anyone would like to contribute, all donations of sweets, chocolate, etc would be appreciated.

“Within a few hours only, the suitcase was full! People are amazing, even in adversity! I am leaving the case there so please, if anyone would like to donate, please do. The items are given out every evening at the Lighthouse, and I can tell you our work is so appreciated by those who seek our services.”

More good news came to Tiglin and the team last week, as another donation was received, to aid the work of the volunteers at the Lighthouse and the diners. A sanitiser stand with four stations was received with ample supplies of sanitiser.

The donor wished to remain anonymous but Mr McCarthy stated the generosity of Kildare people in recent weeks has been astonishing but the charity, especially all at the Lighthouse and No Buck’s Café, are so appreciative of the support.

Mr McCarthy, well known business man of The Elms and AMC Removals, is the co founder of Tiglin Rehab-
ilitation Centre, which he and close friend Phil Thompson from Newbridge founded at Ashford, Co Wicklow.

Tiglin has further opened a ladies rehabilitation centre at Brittas Bay, a support accommodation centre at Greystones plus other outreach programmes.

The ‘No Bucks’ Café is perhaps one of the most vital services the charity delivers to the homeless in Dublin’s inner City. Every night the service feeds from 150-200 people at the Lighthouse on Pearse Street.