Warning about gorse fires in Kildare due to dry conditions

High risk period: People are asked not to light fires in the countryside and to call 999 if they see smoke 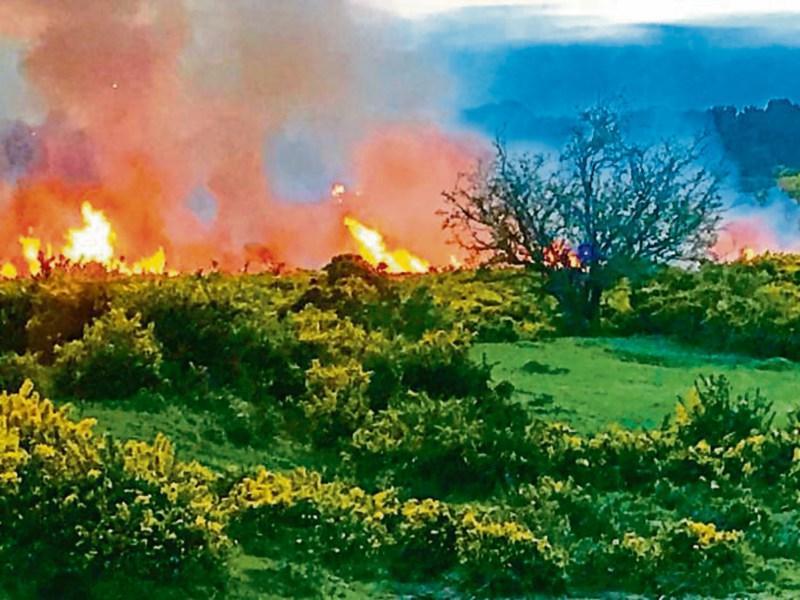 File photo of a gorse fire on the Curragh

Kildare Fire Service has warned of the dangers of forest and gorse fires due to a number of weeks of dry weather.

A Orange Fire Warning — the second highest level — issued by the Department of Agriculture expired on Friday a week ago as rain was forecast over the weekend but a Yellow Fire Warning remains in place.

“In previous years we have seen the high consequence fires that raged in Donegal and Kerry.

“In Kildare we also experience increased calls around this time of year.”

The CFO added: “Given all that is going on with Covid-19 we are asking all landowners not to burn scrub during this high risk time.

“All Kildare Fire Stations are working and available, but like all emergency services, we are trying to ensure that our services are available when they are needed most.

“The public have been hugely cooperative in all that they have been asked to do and Kildare Fire Service asks for their ongoing cooperation to ensure that we are not dealing with wildland fires.”

After record rainfall in February, the unseasonably dry and sunny weather in recent days is leading to dehydrated vegetation — such as across the Curragh.

Firefighters have already had to extinguish wildfires in the Dublin and Wicklow mountains over the last few days as well as locations in Clare and Sligo.

A spell of particularly dry weather at the end of February last year led to ‘tinderbox’ conditions in dense undergrowth and sparked significant gorse fires in the Kildare/West Wicklow border areas of Hollywood and Blessington.

Many of the fires were visible from the Kilcullen, Naas and Sallins areas.

Even though there is a 'Stay At Home' restriction imposed by the Government due to the Covid-19 health emergency, people using the countryside are urged not to light fires.

All countryside users are asked to be vigilant, to report any suspicious activity to An Garda Siochána and to report any uncontrolled or unattended fires immediately to the Fire and Emergency Services via 112/999 service.

Kildare Co Council urged people to keep windows of houses closed and to stay away from the area as smoke is an irritant and can make eyes and throats sore.

Agricultural vehicles such as tractors can also overheat in high temperatures and cause fires in fields.

Meanwhile Coillte has also urged the public to be vigilant in relation to forest fires and added that most forest fires do not start naturally and everybody has an important role to play in preventing them.

Simple acts such as lighting a campfire or having a barbecue can have potentially catastrophic effects.

Hundreds of acres of forest were damaged by fire last summer.

It is illegal for landowners to burn vegetation on uncultivated land between March and the end of August.

People should not discard cigarette ends should make sure they are extinguished.

Anybody acting irresponsibly or carelessly with fire should be reported to the authorities.