Kildare man tells of life under lockdown in Austria

Living in a postcard: ‘No drugs, no crime, if somebody steals your bicycle they'll return it the next day!’ 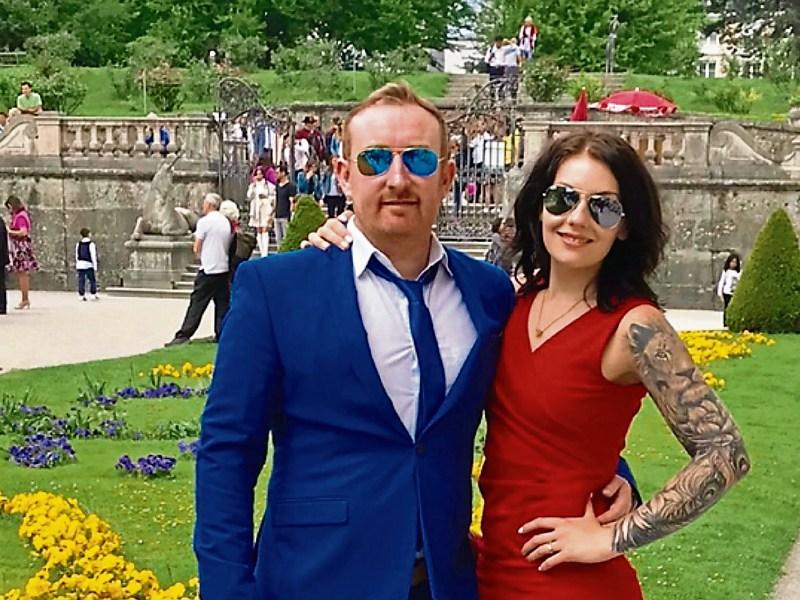 John Paul Wright from Coill Dubh and his wife Mary

John Paul Wright settled in Salzburg a number of years ago where he works in an Irish pub and also has a career writing songs and mimicing foreigns accents.

John Paul went to Coill Dubh National School and later St Farnan’s in Prosperous. He played soccer for Coill Dubh and Timahoe Celtic and admitted he still has the same best mates now that he had when he was five!

He said: “I am a huge Kildare GAA fan and Ireland football fan. My great-grand uncle Jim Wright won the All Ireland with Kildare, My father John Wright was a big Kildare fan too, he sadly passed away in 2015.

“I probably go home on average two to three times per year. I normally swing it so it works out around the time when Ireland play their home games. I had a few season tickets. I haven’t missed many away games in the last 12 years. I was home for Kildare v Longford last summer — it’s a lot easier now with direct flights from Salzburg to Dublin for the ski season and year round flights from Vienna and Dublin.”

John Paul spent some time in Malaga and worked in an Irish bar, and later had slots on radio and TV shows.

He was translating commentary on the horse racing from Spanish to English every Sunday morning for the Racing Channel that was on Sky TV.

He later became homesick and returned to Kildare. However, he was only home from Spain about six months when two of his friends Bob and Tom begged him to go Inter railing around Europe.

He added: “I loved Salzbug as soon as I arrived and I met an Austrian girl who convinced me to return.”

He soon picked up German and somehow learned Russian too.

He added: “I manage an Irish pub, do some voice over work and was also running a property rental business for a spell.

“To describe Salzburg, I would say its like living in a postcard — there’s no drugs, no crime, the worst thing that happens here is somebody drunk will steal your bicycle but return it the next day! The beaches in Italy and Croatia are only a four hour drive away.

“The system here is amazing in general. As EU citizens in Austria, we are entitled to five weeks of paid holidays, double months pay in June and December and free health care.”

A few years ago John Paul went to Cuba on holiday and met a Canadian lady named Mary on a bus.

“We hit it off, I visited her in Canada and she came to Salzburg. Mary moved to Austria after a year, brought the dog Lyla who is now my best buddy. We got engaged in Paris the year after and last July we got married on the beach in Malaga!”

Apart from St Patrick’s Day, the busiest time of year in John Paul’s pub is the Six Nations Rugby.

He said: “We are the only pub that shows it and people come from miles around such as ski resorts. This year though, we noticed a drop.” People were afraid of the coronavirus, I think like everywhere.”

Then the border to Germany, which is only 10 minutes away, closed. Soon after the airport closed and trains stopped running but there was no panic food buying such as in Ireland.

First big events were cancelled, no gatherings of more than 100 people were allowed and pubs could only open until 3pm. On March 16, a complete lockdown was announced.

“Only food shops, doctors and pharmacies were open, you are only allowed out with the people you live with, you cannot be in groups of more than five and police were on the beat. At supermarkets a person sanitizes your trolley and gives you a mask before you can enter.

“Police helicopters were also patrolling. There was a €2,500 fine for violations.”

Similarly to Ireland, people who couldn’t work from home received around 80% of their wages. John Paul added: “People obey rules here, teenagers walk for miles holding an empty Coke can until they find a bin.”

It has been around a month since lockdown started and large shops have opened again. People still wear masks and keep the 2m distance but John Paul said there is a real feeling that all that Austrian discipline has paid off. He explained: “Cars cover the roads again, pubs will open next month, the sun is shining and this fight is almost won.”

John Paul said he has used the month of lockdown to get some song writing done. Back in 20916, he wrote Dance in France — an Irish football song for Euro 2016 which came second in a competition run by RTE.

He set up a YouTube page for his German accent impersonations which was picked up by the University of Arizona. He has also signed up for two big audiobook companies and just finished building a recording studio in his loft. His hobbies include growing chilli peppers and walking the dog with Mary.

John Paul believes that he and Mary may return to live in Ireland soon.

“Mary has fallen in love with Ireland and she has been loads of times. She loves the people and the way of life. Our future probably lies back home, when exactly, we are not sure!”

“I regulary look at the Irish property market, it would be nice to cheer on the Lilywhites more than just once every few years!”

We're running a regular series on Kildare people making their lives abroad - particularly during the Covid-19 crisis. If you would like to share your story, please email editor@leinsterleader.ie