Yarn bombed car in Newbridge and Naas this Thursday

Car covered in nuns' knitting to raise funds for Barnardos 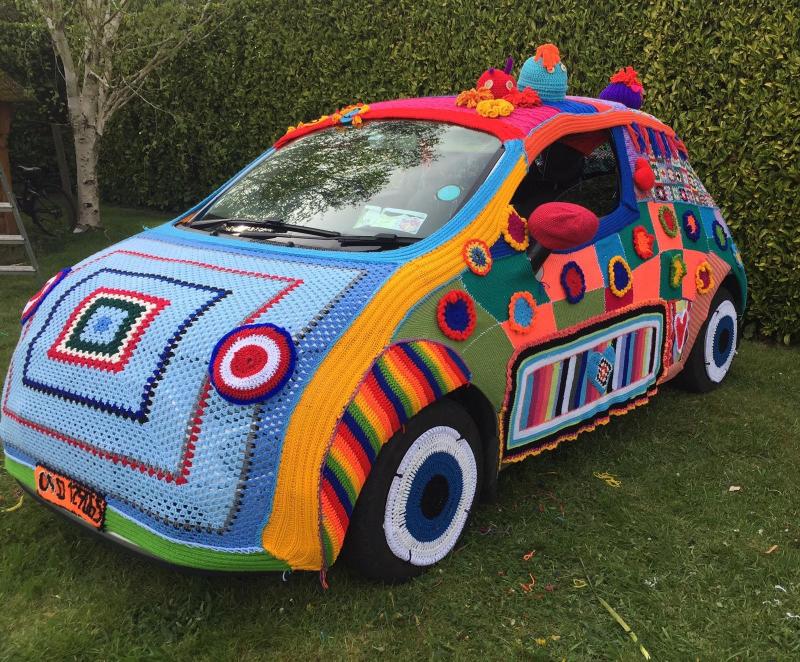 A yarn-bombed Fiat 500, festooned with brightly-coloured knitting, will be touring Naas and Newbridge tomorrow, Thursday, May 7, to raise money for children's charity Barnardos.

The Kildare Yarn Bombers group brighten up the Liffey Linear Park in Newbridge every year as part of the June Fest festival, covering the trees in woollen creations for the delight of young and old.

Unfortunately, most JuneFest activities have been cancelled this year due to Covid-19 restrictions. But the 'knitters on steroids', as the Yarn Bombers have been described, haven't let that stop their clacking needles.

Chief yarn bomber Annie Morris encouraged locals to yarn bomb their homes, furniture, and family members as part of the first National Yarn Bomb Day last Friday in aid of Barnardos. This has raised more than €2,000 so far.

She even yarn-bombed her daughter’s Fiat 500 car to highlight what those currently confined to their homes can do to brighten their lives - with knitting or crochet needles and some coloured thread.

Annie has been given permission by An Garda Síochána in Newbridge to drive the car to the retirement community at McAuley Place in Naas to give the residents a boost.

After her stop in McAuley Place, she will drive to the Holy Family Convent in Newbridge to show the elderly Sisters (who made many of the creations that adorn the car) the results of their handiwork.

Annie expects to be at McAuley Place, Naas for 2pm and Holy Family Convent, Newbridge for 3pm this Thursday, May 7.

“Hopefully”, said Annie, “the ‘Swift Knitty Drive-by’ will cheer up those currently in isolation and I’m particularly looking forward to the Garda escort”.

According to June Fest Director, Stephen Connelly: ‘the June Festival is sadly postponed for this year, but we are planning a host of virtual activities to enable people to engage with one another constructively during the lockdown period’.