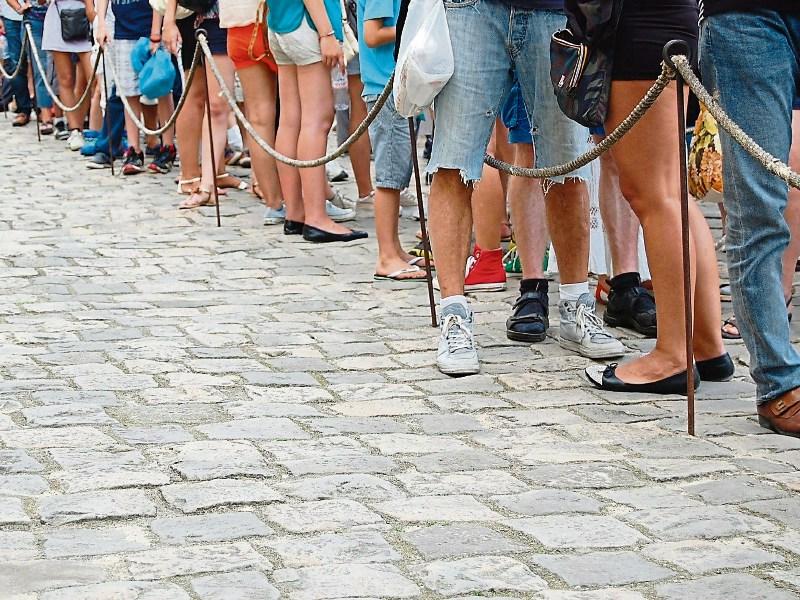 Flatulence whilst queuing is generally frowned upon. I’m not saying I’ve done it but I have noticed it gets an awkward reaction in the line. If it does happen, I’ve been advised that the best option is to ignore it, because generally people will be more concerned that you think they let it slip.

We’ve all become too familiar with the talk about queues. They have become a fact of life during this crisis, and they just can’t be avoided. There are rules to queuing — you can’t leave the line. Picture this, you’ve got to the top of the line to get into Dunnes Stores after standing for a couple of hours and you just realise you’ve left your wallet in the car on the other side of the carpark. What’s the etiquette here?

At this point in your life all the power lies with the person behind you — will they let you back in? All sorts of personalities can be can be seen in a queue. The ‘sneaky snake’ always spots the best available gap in a queue. And if there is none, they’ll make one. Diverting attention, pretending to be friendly, these guys know every trick in a book. After all, lines only exist for people to cut in.

Then there’s the ‘Mother Hen’ who saves a spot for their friend to jump in — wouldn’t we all love to be able to queue by proxy! And still, even in a time of social distancing, we’ve all come across the ‘battering ram’ who tries to intimidate you to move forward, even though the line’s not budging.

And then there’s the awkward chats. Some in the line love to say “This looks like the new norm”. God, I hope not, I can’t handle the queuing.

Some people love the misery of a long queue; they swim in it, lather themselves in the frustration that comes with it. I tend to only queue when I really have to — generally for coffee or when I’ve no other choice, like in airports or for medical appointments .

We’ve been so used to rushing, we’ve sold ourselves to the brutes of efficiency and speed, in our frenzied lifestyles with not a minute was wasted.

We have a need for speed. We didn’t need to be patient, we could circumduct it, there were ways around waiting.

Amazon have estimated that it could lose up to 1.6 billion dollars in revenue if its pages took one second longer to load — yes, one second — because we just won’t wait. We are used to getting quick answers to complex questions.

The good news is that impatience is a behaviour, not a personality characteristic, and it can be changed.

Patience has its roots in the Latin word meaning ‘to suffer’ a concept too familiar to all runners, because running and exercise performance may not only be limited by levels of willpower, but more importantly by the ability to tolerate discomfort. You have to suffer!

In testing the pain tolerance of athletes in 1981, researchers induced ischemic pain (the kind of oxygen-deprivation pain felt when running a race) using a highly pressurised blood pressure cuff around the upper arm.

The ability to tolerate the pain and suffering of hard training isn't inborn. The same study in 1981 measured the pain tolerance of the athletes several times over the course of a competitive season. Their pain tolerance was modest early in the season, when the training load and level of competition was low; and it was highest in the peak season during hard training and racing.

So, an individual’s pain tolerance is clearly trainable to a certain degree, but only through familiarisation and adaptation.

Whether you’re new to running and training for your first 5k or a wirey, grizzled veteran logging long runs for your 100th marathon, running is an exercise in delayed gratification.

Nothing teaches patience like running does because impatient runners become injured runners. This is true of all aspects of running, not just training. Be patient during your race, get the pacing right; be patient while you recover and don’t race too often; be patient if you want to run faster times or run longer distances because progress can be very, very slow.

There are rare moments in every runner’s life when goals that had once seemed impossible are accomplished. The sense of accomplishment experienced after weeks, months or years of hard work reinforces that patience is not a virtue, it’s a skill that, just like fitness, takes time to develop.

In short, running is possibly the very antithesis of the impatient world that we live in. It’s all about waiting... waiting... and more waiting.

The internal struggle fought between running and mental willpower ultimately leads to redemption and liberation through achievement — just like the creamy flat white waiting at the end of the queue.