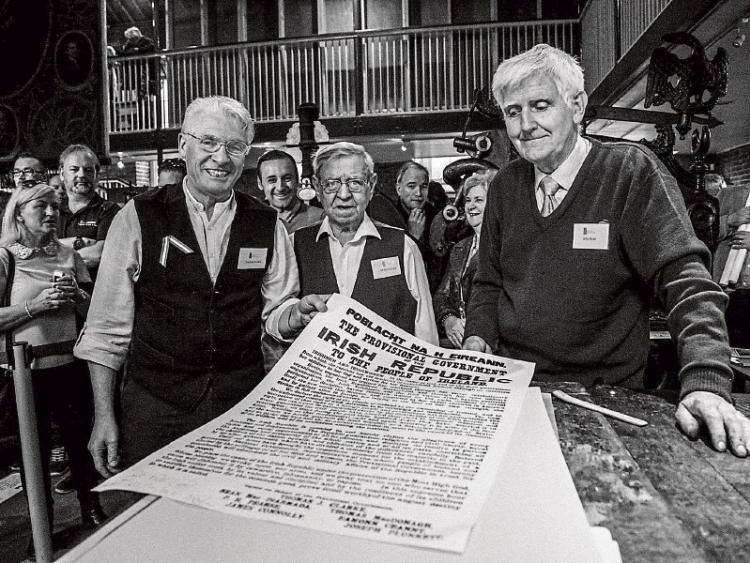 Tributes have been paid on the passing of the former owner of the Millbrook Press printing firm in Naas who was involved in the printing of a centenary edition of the 1916 Proclamation.

He set up Millbrook Press in 1984 and, after building it up into a local success, he later retired in 2010.

The firm is now run by his sons Bill and Dave and daughter Mary.

Neighbours and friends gathered for a guard of honour outside Mr Ryan’s house on Saturday before he was later laid to rest.

A statement by the company said: “Our dad fought a hard battle and passed away peacefully and with dignity.” Billy was the beloved husband of the late Helen and father of Bill, Anne, David, Mary and the late Adele. He will be missed by his family, sisters Annette and Kay, brother Charlie, daughter-in-law Maria, sons-in-law Gerard and Chris, grandchildren Andrew, Aoife, Alison and Claire, brothers-in-law, sister-in-law, nieces, nephews, relatives and friends.

The National Print Museum in Dublin also joined the tributes and said Mr Ryan was instrumental in organising the historic printing of the 2016 Proclamation.

The Museum said: “Today we remember a special man, Billy Ryan. Billy was a gentleman in the truest sense of the word and a craftsman dedicated to sharing Ireland’s printing heritage.

“Many of you will have known Billy from the Museum and in particular through his involvement in the historic printing of the 2016 Proclamation.

Printing colleague Freddie Snowe said: “We have lost one of life’s gentlemen with the passing of William (Billy) Ryan.

“He was a superb printer, a nice man who loved demonstrating the craft of letterpress printing.

“Everyone attached to the Museum will be saddened and in particular his fellow volunteers and members of the printing Chapel who will miss him.”

He added: “The first time I met Billy was 45 years ago in August 1975 in TASK Printers in Naas, when I was a Technical Sales Representative for a printing ink company.

“Having heard of him in the industry I was immediately taken by his lovely gentle manner and obvious knowledge and over the next five years we got to know each other quite well.

“Many years later our paths crossed again in the National Print Museum where we developed a lasting and extremely close friendship which I treasure.

“Billy’s skills as a master printing craftsman played a major role when we, along with our other great friend the late Alf McCormack, decided to refurbish the Wharfedale and print replicas of the Proclamation.

“It was a huge undertaking, quite stressful at times but what fun we had.

“Thanks to Billy ‘MacGyver’ and his Aladdin’s Cave in the boot of his Land Rover and Alf’s skills we were successful.

“I look forward to regaling some of them at one of our reminiscing evenings.”