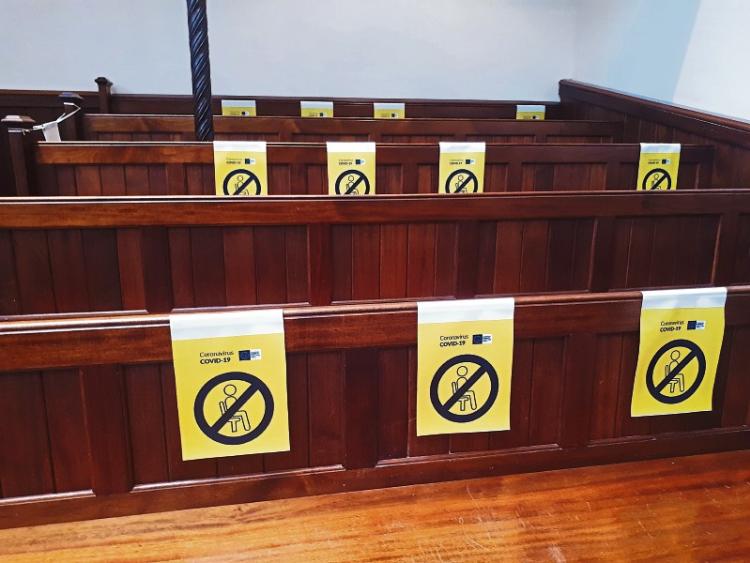 A capacity limit of 22 people has been placed on both main courtrooms in Naas Courthouse.

Signs informing all comers of the limits — imposed because of the Covid-19 restrictions — went up last week within the building.

Because of the requirements of social distancing, especially indoors, there has been a steep fall in the number of cases being heard at sittings of the District Court in Naas.

An extraordinary number of cases have been adjourned to dates later this year.

Because nobody knew how long the restrictions would last at the start of virus crisis, cases were adjourned to dates in June, starting last week.

The list of cases scheduled for Wednesday last (June 2) stretched to a probably unprecedented 23 pages.

Once again, the majority of these were adjourned and most, a total of 100, will come up for mention again either in late July or early September.

People involved in cases have been advised to stay away from court buildings because of virus control measures; but a larger than expected number turned up on Wednesday.

Judge Desmond Zaidan again urged the prosecuting gardaí and defending solicitors to reach agreement — where possible and subject to everybody's legal right to contest even the most minor matter — about cases so that the backlog can be dealt with.

However, there was criticism over the number of people in the court foyer last week from solicitor Conal Boyce who said to Judge Zaidan “if you look outside there, it’s like Grand Central Station”.

Sgt Jim Kelly said he also had concerns about the number of people in the foyer that day. Judge Zaidan said it should be clarified how the capacity would be policed.