Traffic light queues for the loo and pints on a timer - is this getting back to 'normal'? 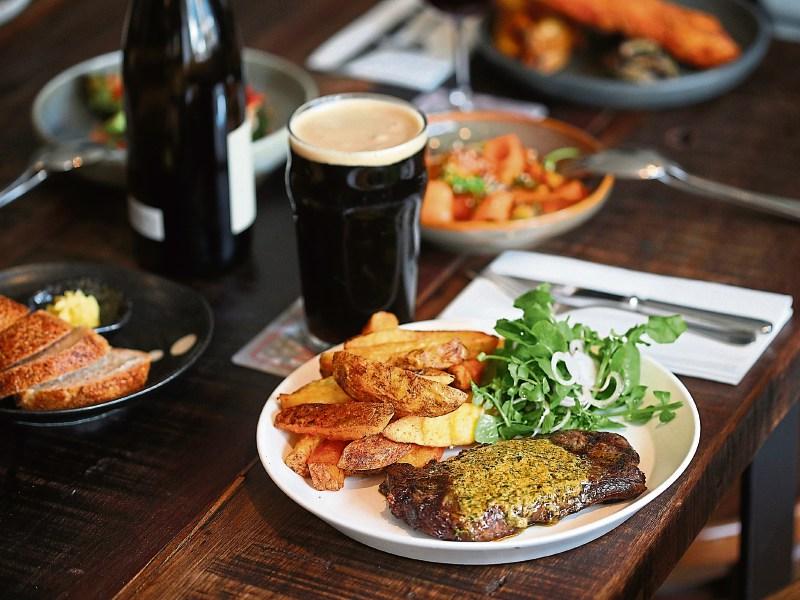 A pint of plain and a 'substantial meal' - where could I get one for €9?

Well, things are finally getting back to something like normal.

At least in the second town in County Kildare anyways.

No shortage of bodies, in the town.

At least at the top end anyway.

The queues outside Penneys would bring a tear to your eye.

The town hasn’t been the same without bumping into shoppers clutching one of those big brown Penneys bags.

No matter when; no matter what time; those brown bags are always on the go.

Despite walking by it four or five times a week, I have yet to venture inside.

And I can’t see that changing any day soon.

Queuing to go into a shop that sells ...

Well, what the hell do they sell in there anyway?

It can’t be too small.

Not if the big wide brown bags are anything to go by.

The footfall going into Whitewater looks to have returned also.

The ice cream boys and girls are back in business, just inside the door.

Back in my day there were only two, well maybe three, flavours of ice cream.

Looking at the ice cream parlour in the Whitewater it seems to have every flavour, and every colour under the rainbow.

Long way from the tuppence we handed over to Molly Lagrue for her plain or ripple (she didn’t do banana) wafer.

Molly ran her shop from the Caragh Road in Naas.

No measuring, just a clean cut, and lovely fresh wafers.

Anyway, back to Newbridge, and the return to something like normal.

I walked by Tesco the other day and nearly fell out of me standing.

And I had just recovered from that experience when I was hit with an even greater whammy.

Apart from the lad counting no one going in.

Cars aplenty, but the queues seem to have disappeared.

Not, mind you, that I was ever in one of those queues in the first place.

I leave that ‘enjoyable’ experience to She Who Must Be Obeyed... if you get me drift.

The last time I was in a queue, apart from going into Croke Park that is, was outside Lawlor’s Ballroom in Naas.

And you’ll never guess who was playing.

Yes, he of The Royal Showband fame and later Las Vegas.

Not today nor yesterday I know, but true nevertheless.

I see only a week or two ago The Big Man departed to the big dance hall in the sky.

The Hucklebuck will be blaring out up there every night of the week now.

There won’t be a wink to be got.

Can you imagine it.

The sweat running down the back of the neck.

You wouldn’t be as sticky on a county final Sunday with The Moores and The Sash fighting it out for senior honours.

And I can tell you there was none of that auld social distancing lark back then.

In fact I think the very opposite was the case.

Moving swiftly along and speaking of social distancing, when in God’s name is all this carry-on going to stop?

I mean there’s only so long you can go out carrying a measuring tape, or in my case, an old wooden ruler, to ensure to keep the right distance apart.

Another problem I have, and it has not been addressed by Leo, The Doc Houlihan or everyone’s favourite professor these days, Luke O’Neill.

The ruler I have only measures in feet and inches.

Not a mention of a metre anywhere.

It can get very confusing I can tell you that.

All that converting of feet and inches into metres and them other yokes.

Sure it would nearly drive you to drink.

Did you see what they are at now.

There was a time you went into a pub, call for your pint of plain, and maybe a bag of nuts or crisps.

Did you see what they are wanting (about) to do.

You probably won’t believe this.

It’s probably an age thing, but unless I am very much mistaken I think I heard that when you go into a pub for a pint in a week or so, you will have to order a meal as well.

And a substantial one at that.

First of all I have to say if anyone out there knows where you can get a substantial meal for €9 please give me a shout.

But it gets worse.

And I realise you will probably think when you read this I am after finding a watering hole that’s open and after downing a few, a substantial few pints of the black stuff, and with no meal.

But to get into a pub for a pint (including a substantial meal) you have to, wait for it, email to tell them you are on the way.

Email your local to tell them you’ll be in for a pint (and a meal).

What planet are those boys on?

And did you notice, not a sign of a female amongst them.

And I haven’t heard one word of complaint from the ‘positive discrimination’ folk.

But we won’t go there for now.

But are those boys in the real world, I say to myself.

And it gets worse!

You couldn’t make this up.

You can only stay for an hour and a half.

An hour and a bloody half.

Then you have to get out.

And it’s not even closing time.

Or even close to it.

But out you have to go.

Seemingly there will be some sort of a timer; possibly an alarm clock at each table and once you put your bum on the seat the alarm is set to go off ... 90 minutes later.

Does that precious 90 minutes include, shall we say, time to relieve oneself?

Can a few minutes be added on, so to speak?

Anyone with an auld dodgy bladdar could be in a spot of bother.

The talk is a new loo system will also be in place.

A type of traffic light jobbie.

Red to hold back;

Green to turn on the tap.

Could see a queue forming that would put the queue outside Penneys to shame.

I blame it all on the Greens you know. There wasn’t a word of any of this until they garnered a dozen seats for themselves.

And now that they have throw in their lot with the Soliders Of Destiny and the Blue Shirts, who knows what will ensue.

Can you imagine the Hush Puppies and Ponytail Brigade calling the shots.

Don’t rule out drinking a pint, while cycling around the building on your bike.

It will also be obligatory to carry, on your person, some sort of a vessel (green) that can be used if one is short-taken.

The vessel could be filled, brought home, emptied and is, of course, re-usable.

It would be called The Green Pee Holder.

That’s exactly where all this is leading to.

I’m beginning to see there could be a lot of merit returning to days of yore.

A tin or two down the banks of the canal.

No measuring tape (or ruler);

No traffic lights to have a pee.