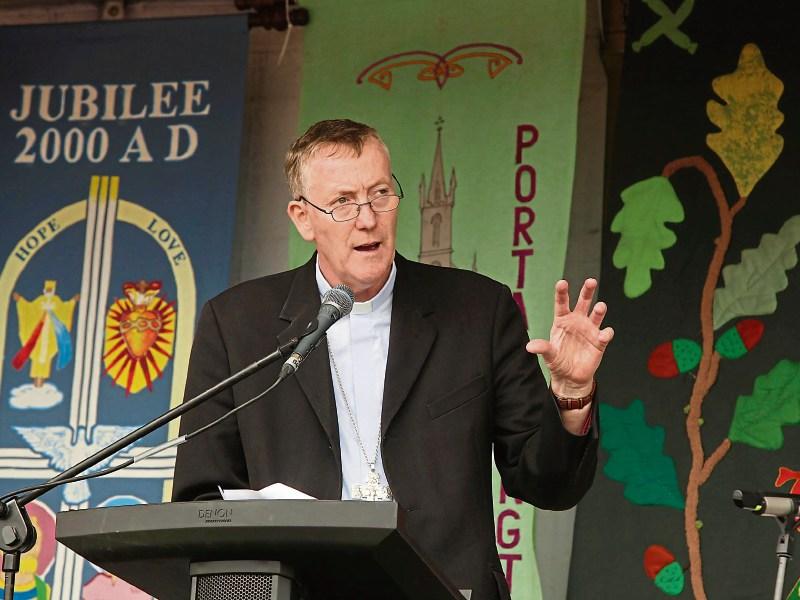 The Catholic Bishop of a diocese which takes in a larger part of the constituency of the new Minister for Agriculture has called on the new Government to prioritise the entire farm agenda not just carbon emissions and biodiversity.

The Bishop of Kildare and Leighlin's diocese takes in a big part of the Laois Offaly constituency which Minister Barry Cowen represents. The new super junior Minister of Agriculture Senator Pippa Hackett also lives the constituency on a farm.

Bishop Nulty made the call on the Government to tackle all the issues on the farming agenda at the annual ecumenical for the victims of farm accidents which was celebrated at the Church of the Holy Rosary, Abbeyleix, Co Laois, Diocese of Kildare & Leighlin on Sunday.

Bishop Nulty told the service which was livestreamed on Sunday on www.embracefarm.com and it will be broadcast by RTÉ One television next Sunday, July 5 that injuries that are life-changing; fatalities that are life-ending.

"Ireland comes in as third highest behind Malta and Austria with regard to fatal accidents on farms.  The new government needs to prioritise the agricultural agenda so that it will be set, not just around the concept of ‘farm to fork’ or by the tackling of carbon emissions while improving biodiversity, but by incentivising farmers to make safety a priority.

"Our farms are being depopulated as younger people are attracted to cities, towns and off-farm occupations. A prioritised safety agenda helps keep people on the land, on the farm," he said.

Tomorrow across this island our Churches of all denominations open for public worship.  The new ‘normal’ will take getting used to.  It won’t, it can’t, be the same as what has gone before.  We have been through so much since the middle of March.

The closing of our schools on Friday 13 March was a clear statement of how serious things had become.  Through the lens of a child we were to look on a virus we were trying to control.  Through the very action of closing schools, the serious import of the moment was amplified.  Normally schools are only closed because of set holiday times, snow days or when the school bus is out of commission. But this was different, very different.

And then through the poignant scenes of sparse funeral rituals, the coronavirus pandemic story unfolded, and it all began through the lens of children who have become in these past few months more knowledgeable about a pandemic, about epidemiology, about ‘contact tracing’ than their obair bhaile or twelve times tables!

The loneliness of loss was magnified by the curtailment around our funeral traditions.  Families robbed of seminal moments like being with their loved one in their final hours.  Families robbed of ritual, at a time when they depended on that ritual of wake, of Eucharist, of burial, of refreshment and were told about numbers, about limits, about precautions.  Families robbed of the normal tactile affection of spending time with one another, particularly grandparents with grandchildren.  When it comes to loss and being robbed of loved ones, I think very much of you, the Embrace Family, some of you having endured the loss of a limb or much worse, a life, on a farm accident.

Matthew’s gospel positions the narrative very much through the understanding of children, of young people: “I bless you, Father, Lord of heaven and of earth, for hiding these things from the learned and the clever and revealing them to mere children”[1].  And children, young people, in my opinion are the heroes of this pandemic.  They have missed sacramental moments like Confirmation and First Holy Communion; they have sacrificed school graduations and transition year ceremonies and they have lost the opportunity to formally sit State examinations.  Being with their friends, “hanging out” is a phrase they liberally use and it is something they still must put restrictions on.

We are not out of the virus; we must grow to live and co-exist alongside it.

The advertisement for the Farmers Journal daily news app carries the heading ‘Farming never stops’.  And that is what worries me, that is part of the problem.  Someone is in a hurry and doesn’t carry out the normal checks and balances before beginning a task; someone else is reversing and is distracted by a mobile ringing and someone else climbs into, steps into, walks into a situation that too quickly gets beyond their control.

We are told that the old and young are exceptionally vulnerable to death and injury on our farms.  Between 2010-2019 tractors or vehicles accounted for 31% of deaths; followed by livestock and machinery.  When we drill down into the danger livestock pose on the local farm, it is surprisingly the cow or the young heifer who poses the greatest threat, accounting for 56% of all fatalities from 2010-2019.

The loss of a child is obviously hugely traumatic for a family and in a community, and we think of Noah Donohoe’s family and friends in Belfast this day.  9.8% of fatalities on farms relate to children and the closure of schools and lockdown of the economy has meant that there are more people than usual around the farm.  These are the times we must all be more vigilant. Vehicles – tractors, quads, teleporters – are particularly of concern.

Sadly 43% of fatalities over the past ten years relate to farmers over the age of 65.  The Health and Safety Authority inform us that last year 13 of the 18 people who were killed on Irish farms were aged over 60.  When we reflect on the wider figures covering Europe, Ireland comes in as third highest behind Malta and Austria with regard to fatal accidents on farms.  The new government just appointed needs to prioritise a system where the agricultural agenda will be set, not just around the concept of ‘farm to fork’ or the tackling of carbon emissions while improving biodiversity, but by incentivising farmers to make safety a priority.  Our farms are being depopulated as younger people are attracted to cities, towns and off-farm occupations. A prioritised safety agenda helps keep people on the land, on the farm.

“Come to me, all you who labour and are overburdened, and I will give you rest”[2], Matthew reminds us and particularly those watching in, who are living with a life-changing condition because of a farm accident.  At its essence today is a ‘Remembrance Service’, for those who have had fatal accidents.  Like the daily figure count in the Covid-19 pandemic, each fatality on a farm is much more than a number, than a statistic. It’s a family decimated; it’s a spouse’s heartwrenching tears; it’s a parent’s worst nightmare.

But to everyone, including those who have endured life changing injuries, the Lord whispers today: “Come to me, all you who labour and are overburdened, and I will give you rest”[3].  He alone can give all of us that rest.  Amen.