Fitness: A change is as good as a rest these days 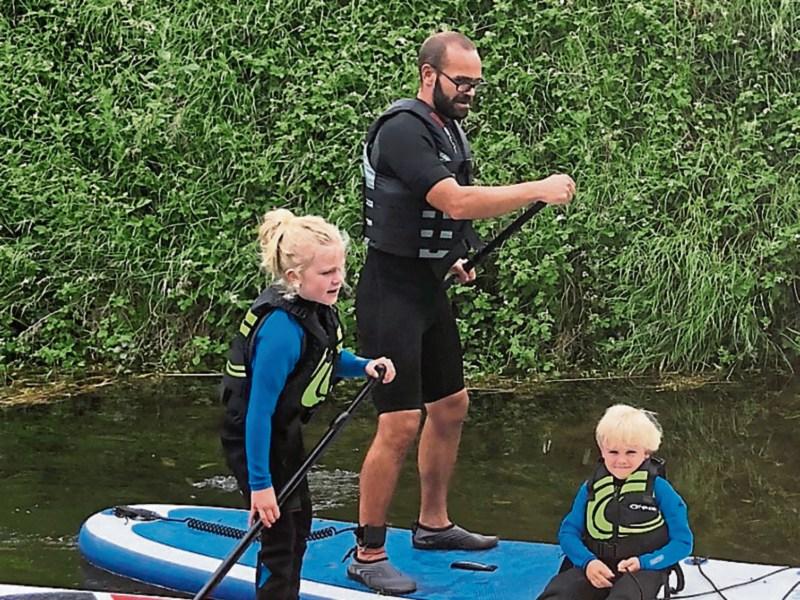 Barry and the kids have taken up paddle boarding

My wife, Michelle accused me recently of being addicted to running. I obviously corrected her and said ‘I’m addicted to getting out of the house away from this madness’. As you can imagine, it didn’t go down well.

Runners tend to get used to people thinking they’re weird. The lifestyle and the ‘why?’ can be baffling for non-runners. They find the embracing of suffering, the punishing of the body and self-discipline all too strange and difficult to grasp.

So, like other runners, I take the funny remarks and the jibes in my stride. But I do draw the line when I hear the word ‘addicted’. I have a number of worried friends and family that send me articles and links trying to find an explanation for what they see as a bizarre lifestyle. These are attempts to rescue me because I must be ‘running’ or ‘chasing’ something, It must be a weird ‘addiction’, they think.

Some will claim it’s the elusive runner’s high that makes running addictive. Most focus on the physiological bodily reactions — the increased blood flow, the muscle tensing, even involuntary contractions — as the signs of it. While psychologists look to the emotional and cognitive changes that accompany the activity.

Many think that when we are engaged in stressful exercise for long periods, our body produces hormones called endorphins, which functionally are similar to morphine. So they claim people like me are addicted to running in just the same way as people are dependent on drugs.

This neurobiological reward is thought to result in this habitual addictive behaviour, in an effort to get the next fix, according to a 2012 study. But the reality is that not all runners who are running on trails, through forests, or along back roads are enjoying themselves! In fact, running is often miserably unsatisfying. So what makes running addictive for me? What makes me want to go back to running the next day?

By now most of us are familiar with the now famous Make Your Bed speech, delivered by Admiral William H. McRaven as the commencement address to the graduates of The University of Texas at Austin on May 17, 2014. As part of his Navy SEAL training, the speaker’s first task of the day was to ensure his bed was made. If the task wasn’t done properly, they would be sent on a 10-mile run. Making his bed taught him the importance of getting his day off to a good start — “If you make your bed every morning you will have accomplished the first task of the day. It will give you a small sense of pride, and it will encourage you to do another task and another and another.”

My wife’s accusation made me reflect and I would argue that, in running, I am addicted to accomplishments.

Accomplishing something, big or small, makes us feel good. Whether you’re a beginner or a seasoned runner, a run will start with a goal in mind. A seasoned runner may have a pace, a time target or may be aiming to break a personal best. A beginner might be aiming to run for one mile further than last week. It’s all relative. But at some point during the run the doubts will start, inevitably exhaustion sets in and the steps become heavier, the muscles start to feel sore and scream.

Deals are made with yourself — just keep this pace going to the next corner... just keep going. This is miserable, not only physically but mentally.

But just as the legs and lungs are struggling, just as negotiations are collapsing, you pass that corner! And you haven’t collapsed yet. You're feeling miserable, yes, but it is not much worse than a minute ago.

So while physically you are still suffering, you start to feel accomplishment.

This triumph makes you feel good about yourself. Just as you were about to stop, you think to yourself — how about the next corner?

So, as runners, I think we are addicted to accomplishments, and every single run gives us a succession of them.

But as an experiment I decided I would prove to Michelle and to myself that I wasn’t addicted to running. I decided to learn to paddle board with kids.

So I stopped running as much as I had been. Now let’s not be silly, I still run every day, albeit for less time and distance.

I bought a couple of paddle boards, took a couple of lessons and away we went. Thanks to the teachers Shannon SUP (www.shannonsup.ie) for getting us started!

Apparently wetsuits should fit snugly and should not be constricting... well, I felt violated the first time I tried mine on.

But I got over that and we persisted. Ultimately, the sense of achievement in learning to stand on a paddle board, to turn it, to go further up the canal without falling in, gave me the same sense of enjoyment and accomplishment that a training run does.

So if I am addicted to running, I don’t think it’s the physical effect that keeps me running out the door, or even the fact that I get to escape the craziness of our mad house.

I think its endless doses of accomplishment it gives me. I may even start making our bed.