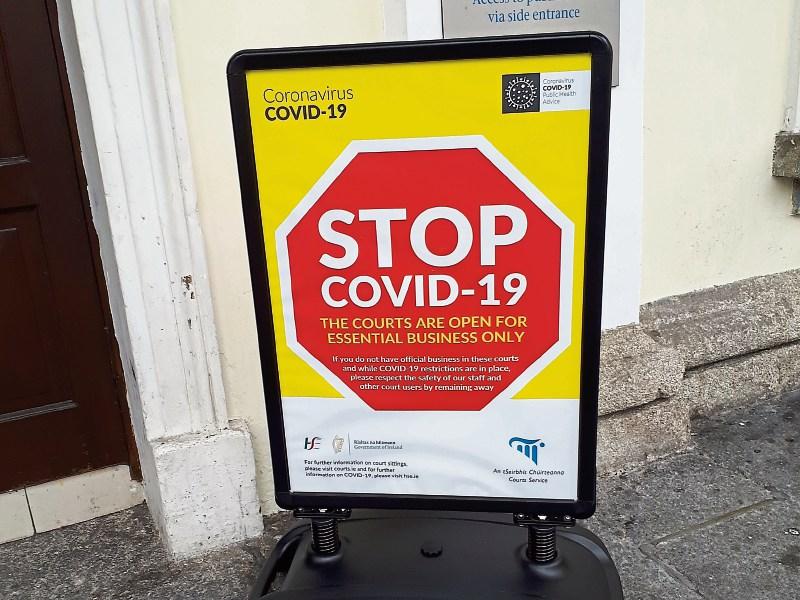 Speaking at a recent court sitting, he added, however that if people decide not to attend “what can I do, my hands are tied?”

He also pointed out that the advice of the Courts Service of Ireland is that only people with essential business are encouraged to come to court.

Security staff were on duty at court sittings in recent weeks in Naas, as they were when court hearings were temporarily transferred to Naas Racecourse for a different reason — renovation work.

They were tasked with ensuring that social distancing was maintained.

Another change saw that defendants were allocated time slots and there were colour coded on copies of the list of cases which were on display in the courthouse building. Judge Zaidan said he is awaiting a statement that will announce the resumption of full hearings in the District Court.

But he said the authorities would also have to examine the advice which says that only those with essential business have to turn up.

Judge Zaidan said this as he adjourned a significant number of cases from the list for the last two weeks to dates this month, as well as in September and October.

However, he also warned against people running cases for the sake of it.

The judge said he would enforce the law fully against anyone who pleads not guilty in instances where a contested case is “without merit”. But he added it is a different matter if someone is found not guilty at the end of a contested case.

Judge Zaidan was speaking against the background of an increasing District Court case backlog, made worse by the coronavirus outbreak and the need to observe social distancing.

In August, the courts system generally shuts down for the entire month with the exception of emergency cases, time sensitive matters or specially arranged cases.