No plans for pedestrian crossing 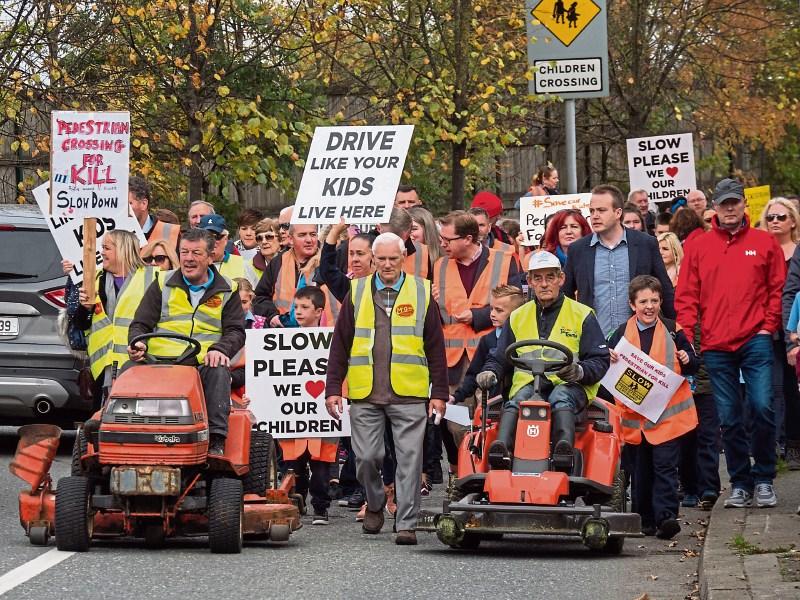 Kill residents protesting in the village in October 2018

There are no plans for a pedestrian crossing in Kill as of yet. The long running campaign for a crossing got another airing at a Naas Municipal District meeting on July 21.

A crossing was installed as a temporary measure during the construction of the M7 widening scheme but was removed last summer, and “there is no current proposal to install a pedestrian crossing”, the councillors were told.

However, when the M7 motorway works are fully completed, a pedestrian and traffic count will be undertaken.

And this will establish whether a need exists for a crossing, and if so, where is the best location for it.

Cllr Anne Breen said a survey was mooted some time ago and the campaign for the crossing started “two or three years ago”. Cllr Carmel Kelly said that a the councillors based in the area had agreed to proceed with cycle lanes from Johnstown to Kill and a crossing forms part of the proposal.

Mayor Fintan Brett expressed fears that a fatal accident could occur and he said even a minor accident on the main road brings high volumes of traffic through Kill. The crossing was put in place in December 2018 following an accident involving a school girl in the village.

But the lights were removed over a year ago after works on the widening of the M7 were completed because KCC felt that would this project would lead to a decrease in the amount of traffic coming through the village. According to Kildare County Council the lights were leased and “are expensive to put in and maintain”.

A local resident said that the community is “bitterly disappointed” and said councillors will be lobbied again to press for the crossing, especially with the planned reopening of the primary school.