James Durney, historian and Kildare Decade of Commemorations committee member, on the events of the Kill Ambush 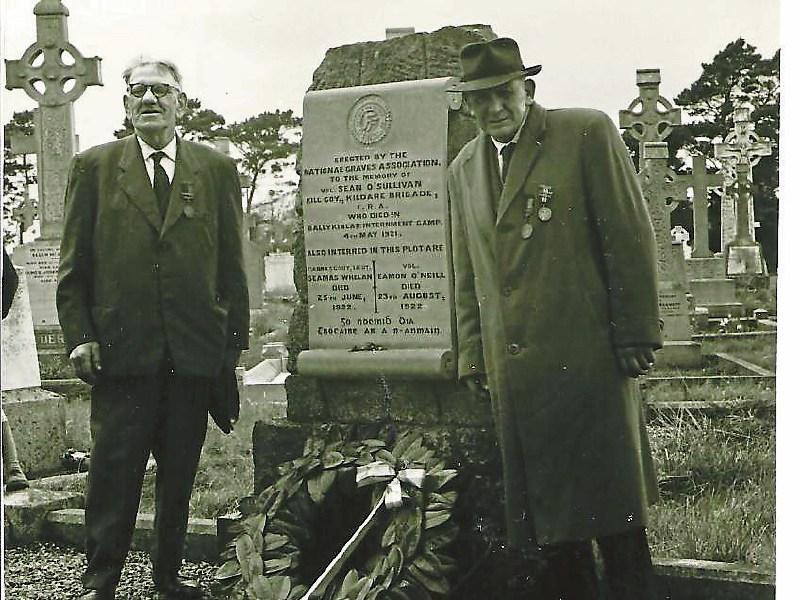 Pat and Tom Domican, who were involved with the Kill Ambush, pictured at the Republican Plot in 1966

The Kill Ambush was the most significant engagement in County Kildare during the War of Independence. In one of the few military actions in Kildare in the 1919-21 period, Tom Harris led Kill Company, Irish Volunteers, in an attack on a Royal Irish Constabulary (RIC) patrol near Greenhills, Kill, during which two policemen were killed.

Subsequently, in retaliation, Broughall’s public house in Kill was raided and looted by a party of Black and Tans, while the premises of Boushell’s Family Boot Maker and Leather Merchant at South Main Street, Naas, was burned down.

The scene of the ambush was at a turn in the road which sloped downwards from Kill village. Coming from Kill to Naas, Palmerstown Demesne, then the residence of Lord Mayo, was on the right-hand side of the road. On the left-hand side was a small wood bounded by a ditch. The area is known as Greenhills.

Following an attack on RIC county inspector Kerry Supple’s house on the Sallins Road, Naas, in January 1919, a patrol of four armed policemen would leave Kill Barracks every second night to stand guard.

In August 1920, it was decided to ambush this party and take their weapons, although it was never confirmed whether the objective was to kill or injure the policemen.

Tom Harris oversaw the ambush party with 33 men from Kill Company under the command of Lt Tom Domican. The main body of men was armed with 10 shotguns and some revolvers; they were placed behind a bank beside the main road with a small screen of trees at their back.

Jim Dunne, armed with a .38 Colt automatic; Jack Sullivan, armed with a shotgun, and three unarmed men, were to stop the patrol from retreating back to Kill Barracks, a quarter of a mile away.

William Daly, section commander, was in charge of the advance guard on the Naas side of the ambush position with five men, two of whom were armed, to stop the police if any tried to escape in that direction. Three more unarmed men were behind the main body with extra ammunition.

About 11.30pm on August 21, 1920, the four-man RIC party on bicycles appeared at the chosen point. As they passed, Jim Dunne’s section closed in about 100 yards behind them. A cry of ‘hands up’ to the police patrol was quickly followed by a fusillade of gunfire.

Jim Dunne claimed that when the police were called on to halt, Sergeant Patrick Reilly, on the lead bicycle, opened fire.

A surviving policeman said the call was accompanied by a volley of shots, and they were given no chance to surrender.

The two remaining constables, Michael Flanagan and Andrew Flaherty, were disarmed by Pat Brady, Jim Dunne and Jack Sullivan, who fired several shots as they advanced to them.

The captured policemen were marched to the Palmerstown Estate, 300 yards away, where they were forced to climb a five-foot gate into the demesne and told not to report to their barracks until the next morning. Two carbines and two revolvers were taken by the volunteers. According to Jim Dunne the whole operation took about 20 minutes.

When a relief party of police arrived, they found Constable Haverty lying dead in a pool of blood and Sgt Reilly gravely wounded. Haverty’s body was taken to Kill Barracks while Reilly was rushed to Dr Steeven’s Hospital in Dublin where he later succumbed to his wounds.

Sgt. Reilly was a 47-year-old married man from County Offaly and had 26 years’ service in the RIC. He was just three weeks’ away from retirement and had bought a new suit for the occasion.

Haverty was 39, single and from Ballinasloe, Co Galway. He had 19 years’ service.

An inquest was held the next day at the Dew Drop Inn, Kill. Constable Flanagan described the attack, saying that they got no chance to surrender as a volley of shots was fired immediately after the call of ‘hands up!’ which came from a small wood.

The cycle patrol was in single file with Sgt Reilly leading and Const Haverty being second, followed by Flanagan and Flaherty. After the gunfire, Reilly’s bicycle swerved and he fell to the ground; Haverty also fell from his bicycle.

A number of men then rushed from the wood firing as they ran towards them, according to Const Flanagan. At least seven or eight men covered them with revolvers and took away their ammunition and weapons.

Flanagan allegedly said to them: “Constable Haverty is dying. I want to get the priest and doctor for him, and some of you go for them if you won’t allow me to go.” Haverty got up on one knee and then fell over. Flanagan said he took Haverty’s hand and was about to say a prayer to him when he was told to move away.

Flanagan said they were marched off to Palmerstown Demesne and ordered to remain there. They stayed until 5.30am and then went back to Kill Barracks.

The Coroner, Dr Cosgrove, suggested that the jury should find a verdict that the deceased died from wounds inflicted by ‘persons unknown’.

The foreman of the jury, Mr. Edward Kennedy, JP, Bishopscourt, said he could not agree with that and they should express their opinion of the occurrence in a verdict of murder. He did not consider it any the less murder, because the motive was a political one, and that he would rather go down in his coffin dead than have the taint of murder on his soul.

After a half hour consultation, the jury found that Const Haverty died of shock and hemorrhage from bullet wounds inflicted by some person or persons unknown and expressed sympathy with the relatives of the deceased.

The funeral of Patrick Haverty took place from Kill Barracks to Sallins railway station where the remains were entrained en route to Galway. The chief mourners were his elderly father and two brothers.

A large number of friends and a RIC Guard of Honour, under Insp Supple and Major Foley, District Inspector, accompanied the remains to Sallins. Several wreaths were placed on the coffin.

Messages of sympathy were received from the Lord Lieutenant and the Inspector General of the RIC.

The ambush was widely condemned locally, with the most vocal criticism coming from the Bishop of Kildare and Leighlin, Patrick Foley, who referred to the incident as assassination and murder. A relative of those who took part said the ambushers were afterwards unpopular in the village as the two policemen were well-liked.

Sgt. O’Reilly died in Dr. Steeven’s Hospital on the morning of August 31. He had received four bullet wounds, although the cause of death was sceptic pneumonia. The two survivors of the ambush, Constables Flanagan and Flaherty, resigned from the RIC within a month.

In follow up raids the police visited the homes of Tom Domican of Hartwell; Traynors of Haynestown, Mooneys, Denis Kelly and the licensed premise of Thomas Broughall, Kill, where Jack Sullivan, employed as a grocer’s assistant, was arrested and taken to Kill Barracks. He was released without charge two hours later.

Pat Domican was wisely not at home when police called; neither were the three Traynor brothers, Philip, Peter and John, who also had taken part in the ambush. However, the worst was yet to come.

Next week: Black and Tan terror in Naas and Kill