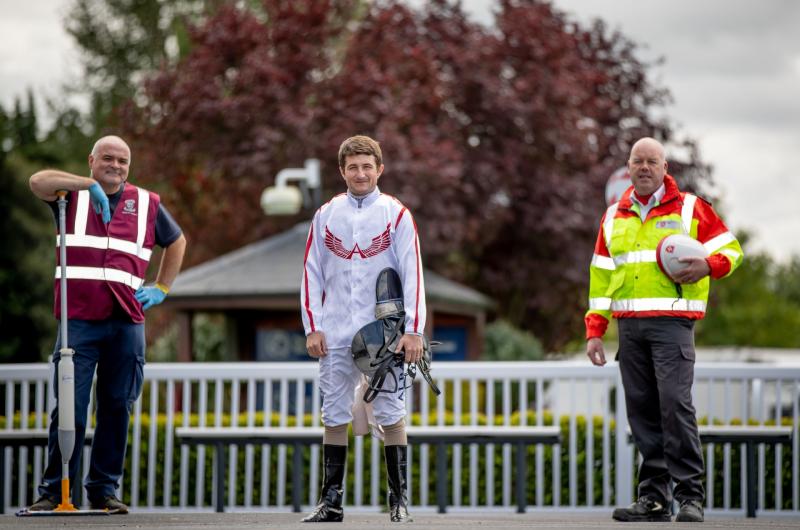 Twenty people who went above and beyond for their communities during the Covid-19 pandemic will be in with a shot to win a fantastic prize at Naas Racecourse tomorrow.

Members of the public nominated 'local heroes', who will be represented by a jockey racing for a top prize in their name.

The twenty heroes will be assigned a horse in the €320,000 Irish EBF Ballyhane Stakes, the richest two-year-old race to be run in Ireland this year, which takes place at Naas Racecourse this Sunday August 23.

The winner will walk away with the use of luxury car from Colm Quinn BMW for a week, a four-night luxury break for two adults and two children at the Heritage, Killenard in County Laois and €2,000 spending money. There will also be prizes for the hero whose horses are placed in the race from the Osprey Hotel, O’Callaghan Hotel Collection, Weatherbys GSB and the Irish National Stud, and luxury goody bags for the remaining lockdown heroes.

Naas Racecourse manager, Eamonn McEvoy, said: “It’s such a lovely gesture to thank all those heroes who made a difference during lockdown and my committee, colleagues and I at Naas Racecourse are very proud to be involved.”

The Kildare heroes are as follows:

Nominated by: Trevor Duggan: “Caoimhe is my lockdown hero, she's a nurse in Naas general and always has a smile on her face. She even contracted Covid while treating patients and once she beat it she was straight back to work caring for others even though it meant she couldn't visit her new-born nephew for four months. Couldn't think of a more deserving person for the prize.”

Nominated by: Maud Nolan & Laura Whelan:  “I would like to nominate Catherine and her husband John for keeping the food bank on Main Street, Naas, going during the pandemic. They work all year round to keep food on the table for people in need.

“They deserve every award going for dedicating time every week and most day to feeding our community across the county. They are tirelessly giving everything to those that need it most. What better person to nominate than the Foodbank, Naas, that have been there day in day out all through the lockdown. They are a light at the end of a dark tunnel for those in need of food.”

Nominated by: Kevin Loughlin: “During the initial lockdown not only did he work every day (single) so some of his colleagues could get some time off to be with their families but he spent time (from 2 metres) and chatted with the elderly who had no one visiting them. I know on occasions he asked people if they needed milk, bread, papers etc from the shops and he went and got it (in his own time) and delivered it the next morning or that evening after his shift. This man is always in good humour and I know him most of his life and have never heard a bad word about him. Please consider him as he would be too shy and unassuming to ever realise what he does as exceptional and put a smile on so many people’s faces.”

Nominated by: Sean Dunne: “Sharon organised the cooking and delivery of 140 free hot meals a week to the elderly and vulnerable in our community. The meals were cooked on a rota basis twice a week by Hartes of Kildare Town, Dora Mays Bistro (Newbridge), All Seasons Restaurant (Newbridge) and Stepping Stones (Newbridge). The funding for these meals was obtained from donations and corporate sponsors such as The Curragh, Proctor & Gamble and The Ballymore Group.

"At Easter, Sharon organised hampers for those who were cocooning. Each hamper held a value of at least €20. Sharon organised a group of volunteers to make up 112 hampers which were then delivered to the elderly and vulnerable in our community.

"This was made possible because Sharon contacted and received items donated by Tesco, Dunnes & Comerford Bakers. Cash donations from Rotary Newbridge, the public and a GoFundMe page on Facebook. Sharon was involved in organising Ccourier service delivering medical prescriptions from the local chemists to the elderly in lockdown, even a pet to the fet. She also organised signage to thank front line staff, organised the supply of PPE material for volunteers.

"Through all of  this, she was conscious of good mental health and organised the sponsorship of wool and materials and then the establishment of a crochet/knitting group which consisted of members of the community.”

Nominated by: Clodagh Redmond: “My mam deserves a prize. She is a ward manager in St Vincent’s Hospital, Athy. She has gone above and beyond helping her patients get better each day. She even went to work Easter Sunday dressed as a bunny giving out eggs to her patients. She then got photos of the patient with their eggs, laminated them and sent them to their loved ones. One of her patients was upset, it was his wife’s birthday and he couldn’t see her, so she phoned the singing Garda Sean who went to the woman’s house with flowers to make her day. This is only some of the kind acts she does and throughout this pandemic, she’s made sure nanny Baxter and grandad John has got everything they need as they are cocooning. She works full time, makes sure her parents are happy, minds me and my brother and two sisters; has to keep daddy in check, we have six chickens and three dogs all before she thinks about herself. She’s even just finished another degree on older persons.”

Nominated by: Mary Howe: “I would like to nominate our super postman John Doyle. Our John is always smiling and chatty when delivering the post, but during the lockdown, he has gone above and beyond. His route, which is a large one, covers Pollardstown, Athgarvan, Kinneagh, Kilbelin, Blackrath, Ballysax, New Park, Martinstown and Cut Bush areas.

"With shops closed due to lockdown, his round was so busy due to people shopping online, and he might have to go back and reload his van a second time with parcels to deliver, and not get home till after 6. Even been that busy, he still checked on any elderly person, anyone cocooned to see if they needed anything and he got them whatever they needed and dropped it to them. He even delivered papers to people at the weekends, and on his weeks holidays, he still drove out and checked on them. Even if they needed nothing from the shops, these vulnerable people might not see anyone from one day to the next, and he would just stop to see were they okay, and even just have a chat with them. He was out in all weathers, rain, sun, heat, and wind, he is an absolute treasure and we here in Ballysax class him as family, and I personally would love to see him appreciated for his genuine heart of gold, and for all the good work he does.”

Nominated by: Claire O'Brien: “My mam Monica was due to retire in June but as the hospital was under pressure due to Covid she postponed her retirement so that she could help out her colleagues. She even went back working nightshifts, which is not her role but she went above and beyond to help. She deserves this prize in my eyes she is a lockdown hero.”

Nominated by: Hugh Gallagher: “Lorraine took on the job of coordinating the GAA volunteers who delivered groceries and ran errands for people cocooning in Celbridge. Lorraine and the volunteers wanted no recognition or reward for providing this service. I can only speak of the gratefulness of my neighbours on the brilliant service they received. It was confidential and respectful and very necessary in March/April/May months when people were under so much pressure. The service ceased with the lifting of the requests for pensioners to stay home, but the goodwill to Lorraine and her team will live on for some time in the community.”

Nominated by: Brendan Kenny: “Sinead has been involved with Naas GAA Club for years and has done an untold level of work inside and outside the fence. During lockdown she brought together a large number of volunteers from the GAA club to help in the local community, whether it was just getting an odd job done to collecting the elderly's shopping while they were cocooning. Sinead never stops giving back to people, and I couldn't think of anyone better to be nominated for this prize.”