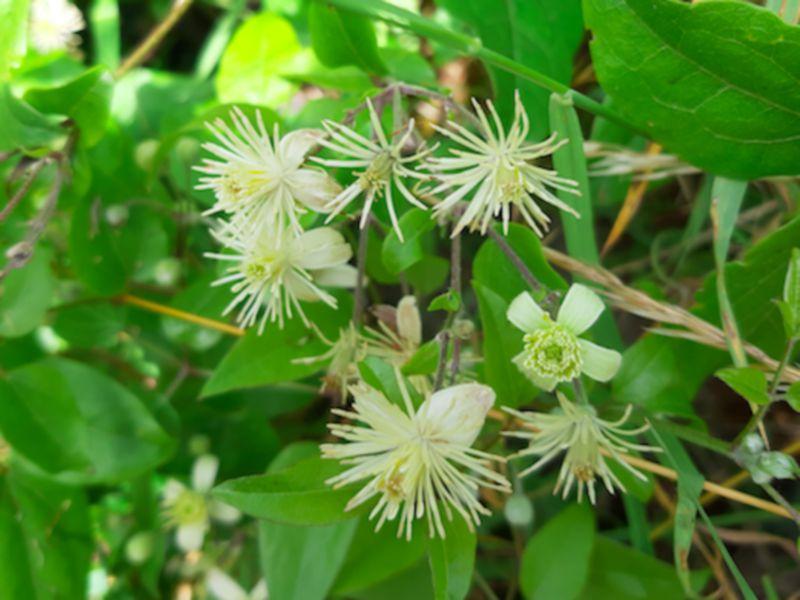 This week’s species is a pretty plant that can be found growing in our wild spaces. However, Traveller’s Joy (gabhrán as Gaeilge) is not native but instead an escapee from our gardens.

There are many plants that have escaped from our gardens and are found growing in our community settings. Some simply grow alongside our native wild plants while others compete with native wildflowers and as a result are considered invasive.

Traveller’s Joy is a climbing plant that can reach up to 30 metres in height with a suitable support such as a hedgerow or tree.

It is native plant in the south of the UK and Europe — however it is considered here in Ireland an invasive plant with a medium potential for impact on our native species.

The white flowers of Traveller’s Joy grow in clusters and what appears to be white petals are actually the flowers sepals.

The sepals on many plants are green in colour and are the outer parts of the flower that protect the developing bud.

Once pollinated, the flowers develop into the seeds which are cream/grey and feathery in nature. This plant is sometimes referred to as Old Man’s Beard and it is believed that it is this stage in the
lifecycle that gives Traveller’s Joy this local name.

It is also said that its actual name is attributed to these feathery seed heads, as they are said to bring colour to hedgerows in autumn a time of year when people were travelling.

Traveller’s Joy is an important source of nectar for pollinators, including bees and hoverflies.

Although not native, this garden escapee will be in flower until September so see if you can find it in a wild spot in your community this week. Or, indeed, have you planted it in your garden?