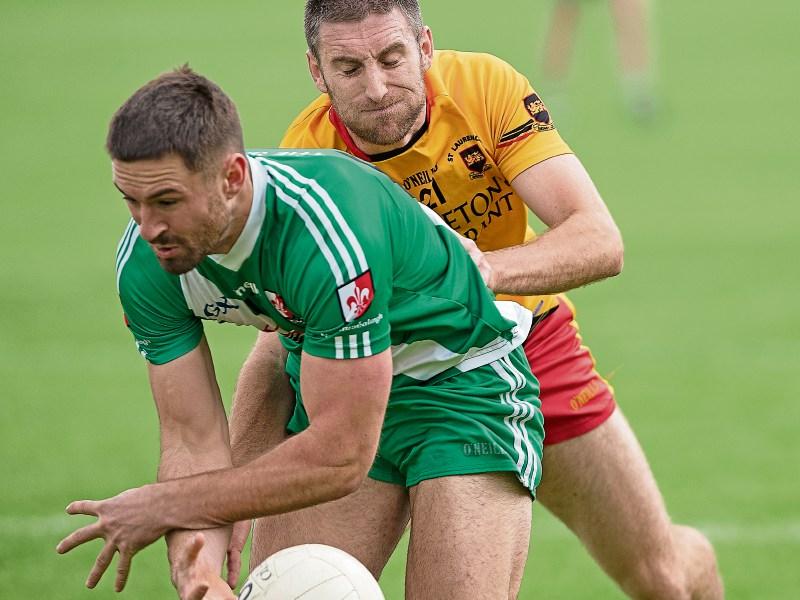 Sarsfields booked their expected place in the SFC quarter final but not before getting a stern test from a much improved St Laurence's side at St Conleth's Park on Saturday afternoon.

Larries were not fancied coming into this one and without the injured Padraig Fogarty their task looked immense indeed.

Sarsfields on the other hand used the game to give some of their panel a chance to show what they could do and in the end manager Billy O'Loughlin probably learned more from this game than he might have anticipated.

Leading by just two points at the break Sarsfields brought on three of their more established players for the second half but it still took a goal from Daragh Ryan in the 52 minute to put away a plucky Larries' side.

It was Ronan Fitzgibbon who got the ball rolling with a fine point but St Laurence's showed they were not here just to make up the numbers with two fine points from Aaron Kennedy and Adam Steed, to take the lead.

Ben McCormack gained possession, sent in to Ronan Fitzgibbon who steadied before burying the ball in the back of The Larries net and before the boys from the south of the county had time to settled they were in bigger trouble when a cross field pass saw Fitzgibbon again in the right place to punch to the net to make it 2-1 to 0-2 after eight minutes.

Adam Steed and Stephen Mann replied with two points before that man with the goal touch, Adam Steed, gained possession about 35m sliced by two defenders before blasting to the net for a fine goal.

Ray Cahill converted a free before Steed fired over and when Cahill was again on the mark this time it was Tommy O'Neill who replied for The Larries to make it 2-4 to 1-6 after 24 minutes.

Larries were somewhat unfortunate not go get a second goal when a great centre saw Tommy O'Neill just fail to get a touch and the chance was lost.

Shane Doyle extended The Sash lead and Gary White popped over a 45 after a Cian Byrne goal attempt was just smothered out.

Aaron Kennedy had the final say of the half converting a free to leave the half time score reading Sarsfields 2-6 St Laurence's 1-7.

Three changes at the break from The Sash tells its own story and when Alan Steed, who had a fine game for St Laurence's, pointed after five minutes of the resumption the margin was down to a single point.

Ray Cahill steadied The Sash with a free but Alan Steed was fouled just outside the square and Padraig O'Neill converted.

Cahill was again on target from a free while O'Neill (Padraig) replied with a similar score but on 51 minutes the sides were level when Stephen Mann fired over his third point from play, 2-8 to 1-11.

However Sarsfields, sensing danger, upped their game, came storming forward and it look like Conor Hartley would find the net but his effort was blocked by a defender before breaking to Daragh Ryan who made no mistake from the edge of the square.

Ben McCormack and Ray Cahill (free) extended the lead, Padraig O'Neill and Aaron Kennedy replied but it was not enough as Sarsfields booked their place in the last eight: final score Sarsfields 3-10 St Laurence's 1-13.