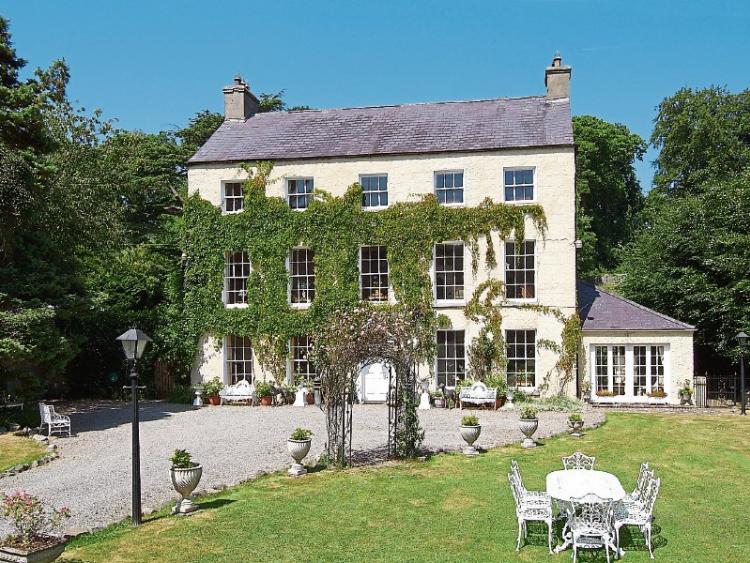 A historic Leixlip house built over 300 years ago is expected to fetch almost a million euros.

Marshfield House sits on five acres of private grounds. It will be offered for sale by public auction on Wednesday, October 7, at the Glenroyal Hotel, Maynooth.

According to selling agent Coonan Property, Marshfield House is a beautifully appointed Queen Anne House, built between 1711 and 1713.

Despite its age, it is in walk in condition with the benefit of a private riverside setting and fishing rights to the river Liffey.

The residence is sheltered by mature trees with lawns leading to the river. It has been meticulously restored in recent years and is well maintained by its current owners.

Its well-proportioned accommodation means the house lends itself to modern family living.

The ground floor has a reception hall with original staircase, a cloak room, a drawing room with a fine carved marble mantelpiece, and a dining room with fireplace and sun room.

There is a spacious kitchen/breakfast room with an oil-fired Aga and east- and west-facing conservatories.

Upstairs, there are six bedrooms and two bathrooms.

The house also has CCTV, spacious attic storage, suitable for future expansion; a laundry/utility room and oil fired central heating. It has been rewired and plumbed.

The private grounds at Marshfield are a feature, with lawns rolling down to the river interspersed with flower beds and colourful shrubs, and with two particularly striking blue cedars, which are over 200 years old.

The lands access onto the Black Avenue, which leads to the sprawling St Catherines Park. The lands have over 100m frontage with fishing rights to the River Liffey and are laid out in paddocks with stud fencing.

Between the years of 1711 and 1713, Marshfield House was constructed on behalf on Benjamin Rayner, a local innkeeper from Leixlip. Rayner is recorded as having obtained a 90 year lease from Joseph Marriot.

As part of the lease, Rayner contracted to construct a ‘house of lime and stone and other improvements’. The lease also stated that its lessee is “obligated to produce of two dozen trouts yearly and every year at Christmas”.

The name Marshfield House refer to Archbishop Narcissus Mash, founder of Marsh’s Library. It is recorded that Archbishop Marsh’s niece, Grace, daughter of his brother Epaphroditus, was an early occupant of the house.

Furthermore it is believed that the archbishop himself resided at Marshfield for a time.

Other occupants associated with Marshfield include Lieutenant Thomas Atkinson, and the generations of a Cavendish family. In 1848 the property was acquired by the Trench family and in 1878 by General William Irwin.

Subsequent occupiers included the Ferguson and Forsyth families and the current vendors acquired Marshfield in 1988.

The auction will take place at 3pm on October 7.

For further information, contact Philip Byrne of Coonan Property on 016286128 or philipb@coonan.com.