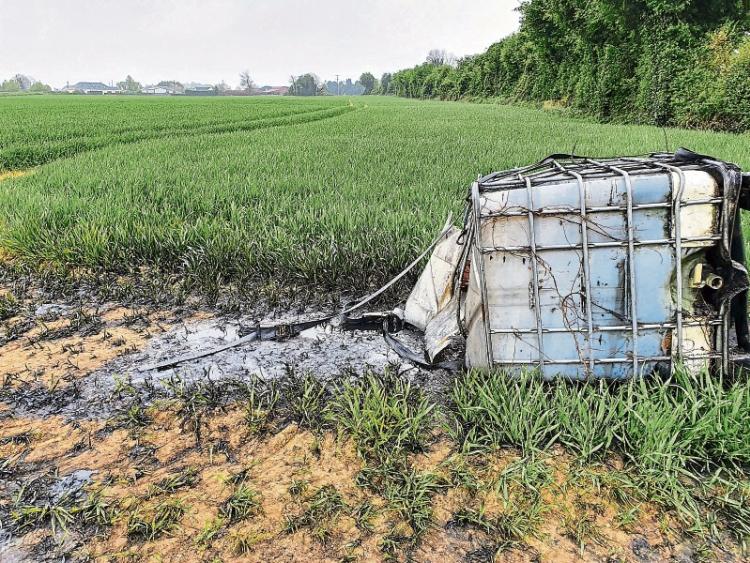 An oil tank which was dumped on land at Lullymore, between Allenwood and Rathangan

People responsible for major littering offences should be taken to court, a recent Kildare County Council meeting was told.

Naas councillor Bill Clear said that a day in court should be the outcome for anyone responsible for illegal dumping in causes where the cost of the clean up operation exceeds €500.

Cllr Clear told a recent Naas Municipal District meeting that court action should replace a €150 fine and he said the proposal should be considered by the Department of the Environment.

He was supported by other councillors like Carmel Kelly who said a €150 fine “is going nowhere”.

Cllr Kelly said the council should employ someone who would “go around knocking on every door” to see if residents are paying waste collection charges.

Cllr Kelly said it was also important to know who is disposing of waste.

Naas Mayor Fintan Brett said CCTV should have a role in investigating incidents.

He said €40,000 had been allocated two years ago to help pay for a CCTV system, but this money has not been used.

KCC official Ken Kavanagh said the council does not apply on-the-spot fines for serious littering incidents because it believes the €150 fine is an insufficient penalty in such cases.

“Instead it is council policy to commence legal proceedings with a view to the maximum fines possible being imposed by the court.”

He said KCC will prosecute in instances where material is illegally dumped and the identity of the offender can be established.

“We don’t seek to issue a fine, we seek to prosecute.”

Mr Kavanagh stated that while prosecutions will be considered the issue in many cases is identification.

Mr Kavanagh added that the cost of cleaning up sites is simply a waste of money and he said there have been incidents in Sallins recently.

He said employing someone to visit homes to see how refuse is being disposed of, can be done but is problematic just now because of Covid-19.

He added if residents are aware of illegal dumping taking place, they can contact the council, which will then contact individual households to establish how the refuse is being disposed of.

The councillors were also told that the GDPR directive, which protects personal data, does not apply in cases where a prosecution is taking place.