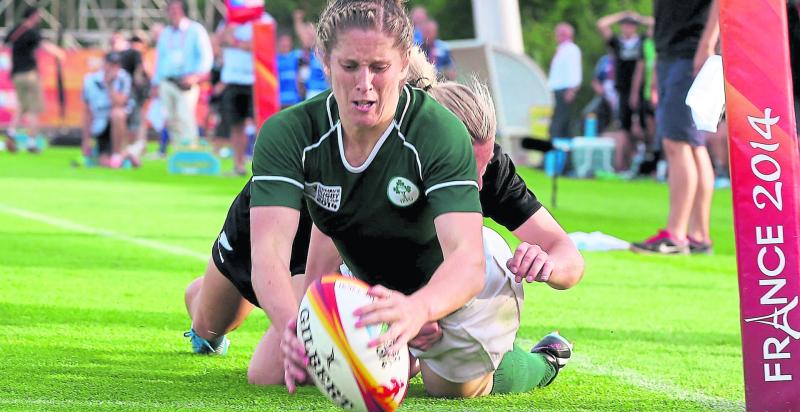 Alison Miller touches down in the corner against New Zealand at the 2014 World Cup.

Two Irish rugby legends with Kildare links have been nominated for top awards in a special edition of the World Rugby awards. The winners will be decided by public online votes.

Alison Miller, the Laois native who teachers in Athy College, has been nominated in the International Rugby Players Women’s 15s Try of the Decade category.

Miller hung up her Irish boots in 2019 but she has been nominated for her wonder try against New Zealand at the World Cup in 2014 when she outpaced the New Zealand backs to burst from the half way line to touch down in the corner as Ireland recorded a memorable victory.

Naas man Jamie Heaslip has been nominated in the International Rugby Players Men’s 15s Try of the Decade, for his try against Italy in 2016. The score by the former Leinster, Ireland and Lions great, who retired due to injury two years ago, finished a brilliant passage of team play by the Irish side.

Fans are invited to have their say and vote for the men’s and women’s 15s and sevens players of the decade, along with the try of the decade to celebrate a special edition of the World Rugby Awards in 2020.

Nominees in all six awards categories consist of previous World Rugby Award winners over the last decade (2010-19), with the exception of the Women’s 15s Try of the Decade for which nominees have been selected by International Rugby Players.

The World Rugby Awards panel will also be selecting their men’s and women’s teams of the decade.

Click here to see all the nominees, and to vote for Miller and Heaslip, as well as your choice in the other categories.