No hot sun, but Jimmy back riding shotgun 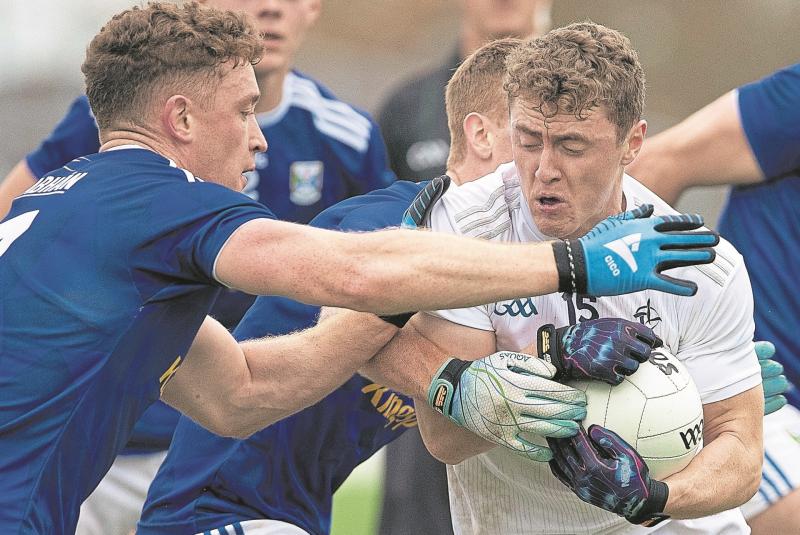 Jimmy Hyland in action against Cavan

For some strange reason the mind took a bit of a ramble during Sunday's clash against Cavan, nothing to do with the visitors I hasten to add.
No, as Jimmy Hyland tormented the Cavan defence time after time, it immediately brought us back to Croke Park, the sun shining and Kildare U20s great win in the All-Ireland final of 2018.
And with that came George Ezra's version of Shotgun, a tune adopted by the U20s squad back then and all through those celebrations that tune popped up with various individual lads giving their very own rendition.
Not sure if The Larks man sang solo but he certainly joined in with the rest of that great team as did team captain Aaron Masterson who lined out in midfield on Sunday.
It may have been two years ago at this stage but on Sunday Jimmy showed that while 2019 was a disappointing season for him — due to injury — he showed that his prowess on the football field has not deserted him as he recaptured his form that won him man of the match awards in the Leinster final, the All-Ireland semi final and the All-Ireland final, in Davy Burke's managed side.
Jimmy, on Sunday, was not alone by any stretch of the imagination as he was part of an inside line that included debutante Darragh Kirwan and the exciting Ben McCormack that between them knocked up no less than 15 points.
Darragh Kirwan, too young for that U20s squad two years ago, was making his debut at this level but he took his opportunity with open arms, putting on a display we had hoped to see when he originally burst on the scene as an U16 player, with undoubted talent.
Four points from play was impressive, but his overall performance also caught the eye, constantly linking up, providing vital passes that saw him right there in contention for the man of the match award along with the man playing to his right.
And Ben McCormack was not too far behind either. Having missed the entire league due to travelling abroad, he returned prematurely due to the dreaded virus, and not for the first time showed he is a talented footballer, an intelligent player and a player that has the ability to open up defences and score from distance.
Incredible as it may see, come late Saturday afternoon, Kildare could have booked their place at the top table of Division 1; remain in Division 2 where they are at present, or lo and behold, everything goes belly up and they could, whisper it, be relegated to Division 3.
So here's hoping Jimmy can remain riding shotgun; Darragh remain his able deputy; Ben continues to split the posts and the rest of the boys stay fit and healthy.

Throw-in Saturday at St Conleth's Park, is once again 2 pm, behind closed doors.