From her wedding on Friday to championship action on Sunday 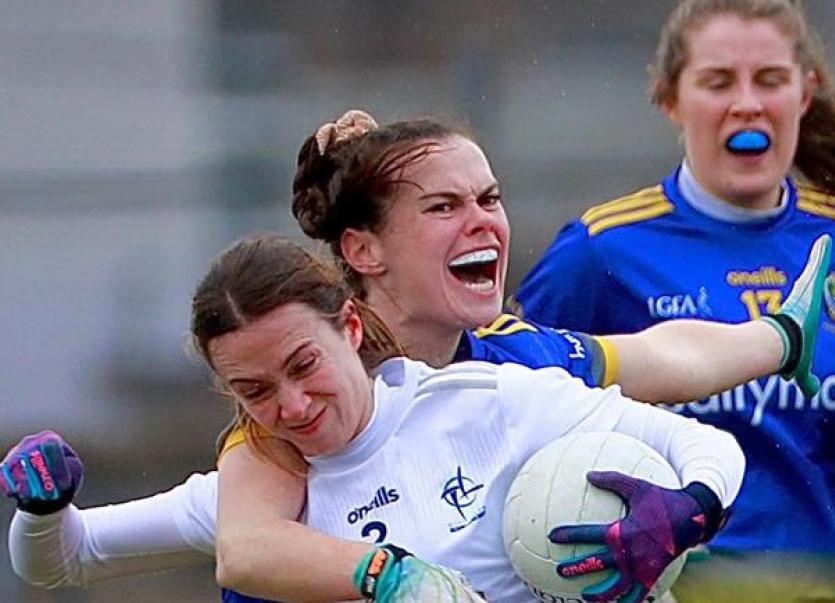 Togged out in white on Friday and Sunday, last weekend was one to remember for Kildare and Carbury defender Claire Sullivan.

The rescheduled TG4 All-Ireland Intermediate championship meant their clash with Clare and her wedding to clubmate Brian O’Flaherty had to do battle for priority, but in the end both occasions went off as planned. With a ring on her finger and a win in the bag, Sullivan and Kildare had plenty to celebrate.

Changing Covid-19 restrictions meant the happy couple had plenty of headaches in the lead up to their big day, but Claire says she was determined to play for the Lilywhites – even if she had to bring her boots in the wedding car.

“Both of us play football. My husband now, Brian, he is the club captain here in Carbury. We both work everything around football anyway. We thought that was the safest date we could possibly go for,” said Claire, a forensic science graduate, who works as an anti-money laundering expert. 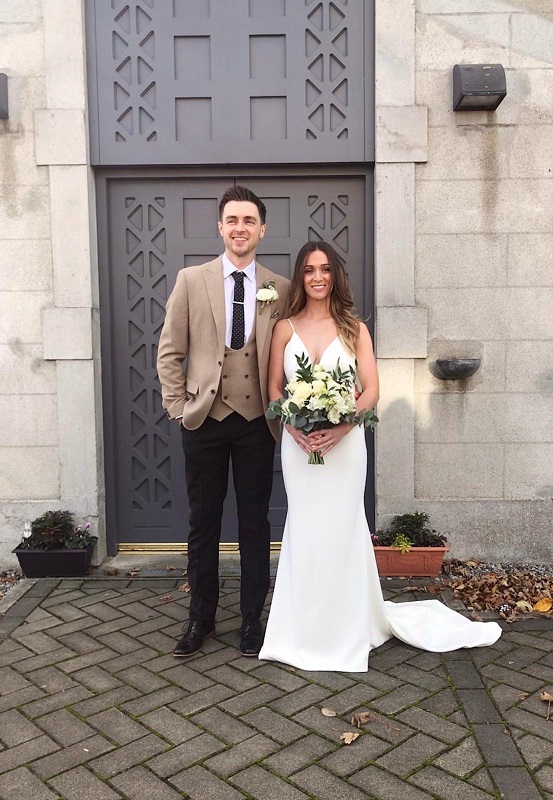 “Any other year you’d be absolutely sound having a wedding at the end of October...‘football will be wrapped up in September, perfect!’ Yeah, that didn’t happen.

“I can’t remember when the fixtures came out, but I got on to Dan Moynihan the Kildare manager straight away.

“I still would have togged out if the game was on the Saturday anyway, but that bit more time to recover was ideal. Getting married, it’s a long day and I’d have been really tired and not in the best condition to go and help my county team to win a crucial first game in the championship.

“The extra day was great. We didn’t have to ask for it, it just fell on the Sunday so it was perfect.”

Following their marriage ceremony at Holy Trinity Church in Carbury, Claire (28) and Brian had their reception just across the border at Rathsallagh House in Co. Wicklow. They were permitted to have 25 guests at their ceremony, which meant her niece Orlaith was the only county teammate at the festivities, but the team had a big welcome for the new bride in Clare on Sunday

“They did make a fuss; I was absolutely dreading it. It was lovely, but I don’t really like being made a fuss of at all,” said Claire, who ended up coming on in the second half against Clare.

“I wouldn’t have been doing anything else anyway, even if we could have gone away anywhere for a few days down the country, we weren’t going anywhere until Sunday night. We were planning to go on Monday and be back in time for training on the Wednesday.”

It’s ten years since Sullivan was first introduced into the Kildare senior panel, but her time in the white shirt has been fractured. Injury has been a regular partner on the journey with serious ankle, collarbone, patellar tendon and hand injuries pausing her playing career, so perhaps it was a smart move to step out of training last week.

“A few dodgy things have happened to me over the years, so that’s why I took myself out of contact on Wednesday. I tend to put my face where I shouldn’t and it’s my own fault really. I lose the run of myself.

“After a few years out I was on the panel again in 2014, but I tore all the ligaments in my left ankle in a club game. It was a bad, bad tear. I was off my feet for a good few weeks. I had to teach myself how to run again. My ankle was just collapsing underneath me. That was a massive setback.”

After those interrupted few years, Sullivan forced her way back into county contention, and when Moynihan took over he was quick to call on her services. Earlier this year she was named as a vice captain, and after five straight wins to start their Lidl Division 3 campaign, they looked set for promotion before Covid scuppered that.

“It was very, very hard to take, I won’t lie. At the start of the year I set myself a few little goals: try and get as many clean sheets as possible in the league; get to the league final; and if we get there we’ll worry about winning it then.

“I had gotten so far ticking these off my list in my head as each game went on. Then it was very, very hard to take when the news came out. I had a few days of feeling sorry for myself over that. But you have to pick yourself up and go on again.”

As one of the teams in the only four-team group in the championship, Kildare will have to play three consecutive weeks if they are to reach the TG4 All-Ireland semi-final. They got off to a great start against Clare at the weekend, while the face Sligo tomorrow (SUNDAY) and Laois a week later, with just one team qualifying for the knock-out stages. It’s pressure from the start.

“Clare would have been favourites to win that first game, but you can’t write off any team, especially this year. Knock-out football kind of changes people.

“I know it’s a group format, but with just one team going through you cannot lose any game. We have job one done and it’s on to Sligo next. The girls relaxed a little bit on Sunday night I’d say, but it has been full steam ahead all week for Sligo.

“With this schedule, there is not a lot of spare time there, there is no room for recovery if girls pick up little knocks. Hopefully we will all survive the three weeks, but we have a fantastic panel. It’s not just 15 girls, we have so many girls that have committed and are ready to put their bodies on the line. It is a real panel effort from us at the minute, it’s great to have.”

So when is the honeymoon planned?

“Lord above, we have no honeymoon planned. We had thought about it, to try and travel a bit in the States, maybe San Francisco, maybe see where it took us for a few weeks.

“The plan was to do it in January when there’d be no football, but we’re not even sure about that now. I wouldn’t really want to be flying now either, I think we’ll wait until everything settles down and things are a bit more normal.”