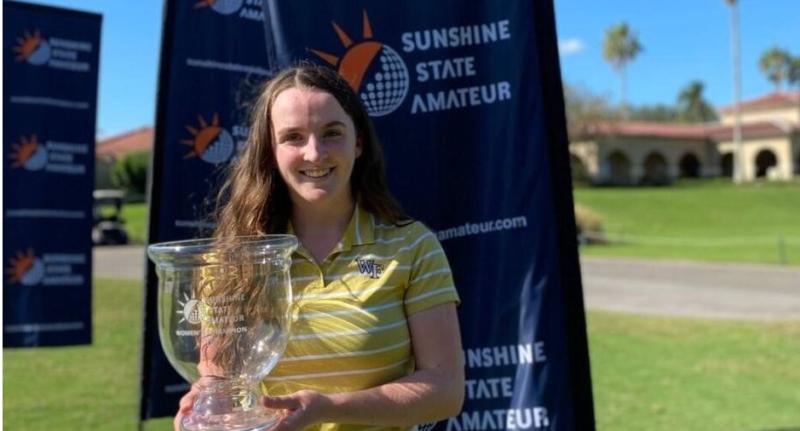 Lauren Walsh, from Kill, Co. Kildare, and a member of Castlewarden Golf Club recorded her second US collegiate title in as two months with a resounding six shot success at the Women’s Sunshine State Amateur this week.

The Wake Forest second year student was tied for the lead going into the final round, along with England’s Euphemie Rhodes at level par, however a one under par 71 saw the Co. Kildare golfer leave her opponents in her wake, eventually having no less than six shots to spare.

“Absolutely delighted with another win,” said Walsh. “Nice way to round off the unique semester. I played really nicely today, the pins were a lot more difficult I found, so I had to play smart all day. I hit my irons really well yesterday and today and gave myself plenty of good chances. My short game was good today in tougher conditions which helped minimise the bogeys. Roll on the spring season!”

It was a round that consisted of two birdies and just one bogey, composed under pressure as Walsh made light work of adding to her maiden individual US collegiate win in Greensboro a month ago. There it was another crushing win, a stunning five stroke success at the Grandover Resort Women’s Griffith Amateur with Walsh making a habit of hammering home the advantage when she gets a sniff of victory.

The Kildare star is currently 44th on the women’s amateur golf rankings and sure to rise even further with this latest win, no doubt now targeting a place on next year’s GB&I Curtis Cup team as her progression continues on a steep upward curve. Walsh’s success Stateside has been swift, having appeared in the Wake Forest lineup for all seven events of her first season, finishing with a stroke average of 72.37. She finished inside the top-25 six times with her best coming at the ANNIKA but now a two-time winner in her second season, the sky’s the limit for Walsh as she makes her way through the amateur ranks.