'Give it a Try' at Naas RFC for young girls 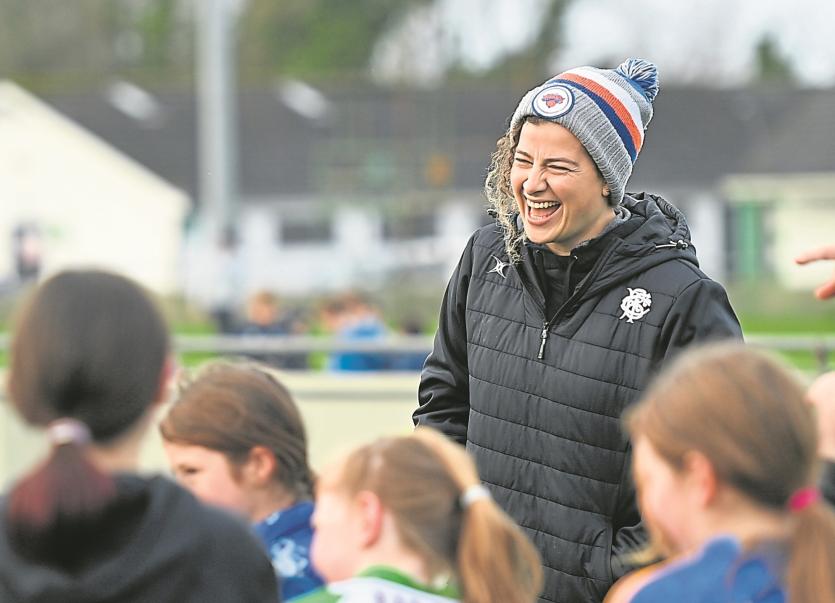 Leinster and Ireland player Jenny Murphy during a Leinster Rugby Girls Give it a try session at Naas RFC in Naas, Kildare. Picture: Ramsey Cardy/Sportsfile

Naas Rugby Club recently ran a four-week programme for new players to play rugby as part of the IRFU’s national “Give it a Try” campaign.
The sessions were aimed at younger players at Under-12 and Under-14 as the start of what the club hopes will be a pathway through the club and into adult rugby. The emphasis across all the teams is firmly on participation to drive playing numbers, and this approach, combined with excellent coaching, has led to great results on and off the field in recent years.
“Give it a Try” gives girls the chance to try the game in a fun, friendly environment. Most of the new players then stay with the team and join the club. Even though there are no games at the moment, all the Naas girls’ teams have continued training in line with all the local and national regulations. By week 4 of the programme, the club had 85 girls training.
Irish international player and Women’s Head Coach Jenny Murphy joined the players for some games with the younger girls and to run advanced coaching sessions with the older players.
Jenny believes “Naas has a fantastic track record in recruiting and retaining players, and it’s great when these young women graduate to our adult team.”
Even though the Give it a Try programme is now over, new players are very welcome, contact David on 085 220 4635.

Meanwhile Naas Rugby Club has recently set up a new inclusion team for children with special needs aged 6 to 16 on Saturday mornings. This was the last piece in the jigsaw for the club, who are proud of their role as a community club.
With this new team, the club can now offer rugby for all, with elite and social teams for men and women, teenage boys and girls, as well as mini rugby for the youngest sports stars in our town.
The inclusion team is the brainchild of local school principal Ciaran Keegan and Club Welfare Officer Susan McKeown, and they are ably supported by other club coaches.
Transition year students from Naas Community College and St Mary's College also work with the players every week.
The team is completed by members of the Naas girls’ teams, including the club’s Director of Rugby, Gary Rowan.
Around 20 boys and girls now train every week, learning a range of rugby skills and enjoying a much needed run around with other players.
Head coach Ciaran Keegan says “This is one of the best things I’ve done in rugby – the players, coaches and parents all really enjoy their Saturday morning activity.”
Club Chairman, Michael Dempsey says “we’re proud of our role as a community club, with elite teams and social sides for men and women, all our youth teams, minis, and now our mixed ability team. We believe, more than ever, than the town’s sports clubs play a major part in the life of the town.”

The response from the new players and parents has been very positive, with one mother commenting “This is now the highlight of our week – with lots of other activities cancelled, rugby at the weekend is fantastic.”