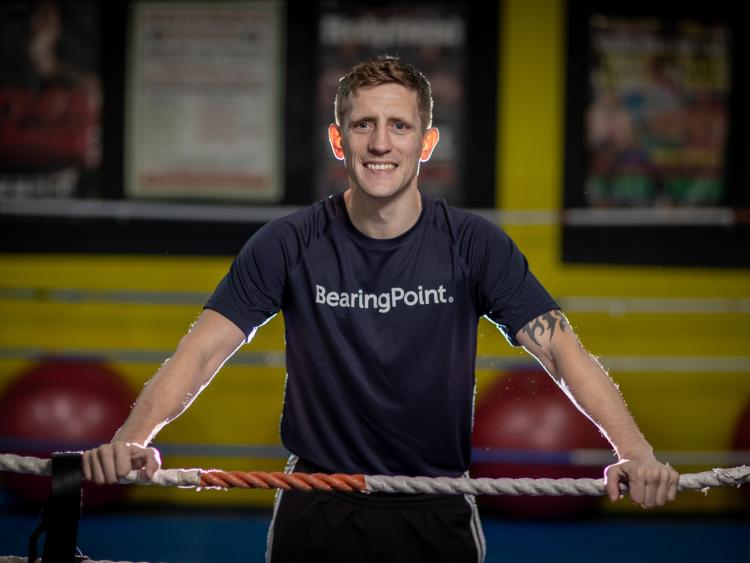 Athy boxer Eric Donovan has taken up a role as the new health and wellbeing ambassador for BearingPoint, a Dublin-based consulting company.

The news comes as the pro athlete was celebrating the news that he is now a mandatory challenger for the EBU European Union title at super featherweight. The 'Lilywhite Lightning' is now next in line to face champion Haithem Laamouz, although no date has yet been set for the showdown.

The former five-time Irish amateur boxing champ and double European bronze medallist is enjoying a 13-1 run in his professional career, most recently beating Rafael Castillo in Belgium in December.

BearingPoint said they are committed to supporting their staff in improving the balance between work and home, while also helping them - through Donovan's invaluable experience and support as a pro athlete - to implement healthy routines and habits to support their overall physical and mental health and well-being. The boxer has already been hard at work in his new role, putting BearingPoint employees through their paces with online workouts and seminars over recent weeks.

“In addition to helping with our health and well-being activity, Eric will also be involved in several Corporate Social Responsibility activities we plan for this year," said BearingPoint marketing manager, Madison Duffy. "BearingPoint is proud to partner with Eric, not just because of his success in the ring, but also for the journey he has been on outside of the ring. Eric is already inspiring a generation of young people across Ireland through demonstrating how hard work, resilience and dedication can help you become stronger. We are proud to support him on his impressive trajectory through the world of professional boxing.”

Donovan added: “I am really honoured to be appointed the health and wellbeing brand ambassador for BearingPoint. I’m really looking forward to sharing my stories and experiences with the staff of BearingPoint and supporting them on their health and wellness journey and am thankful to BearingPoint for all of their support.”

The former St Michael's, Athy, man recently told IrishBoxing.com that the Laamouz match-up would be a 'golden chance for me to claim a European title'.

“My plan is to switch back to featherweight, but for now we’ll just focus on one move/goal at a time- and that’s my EU title shot.”