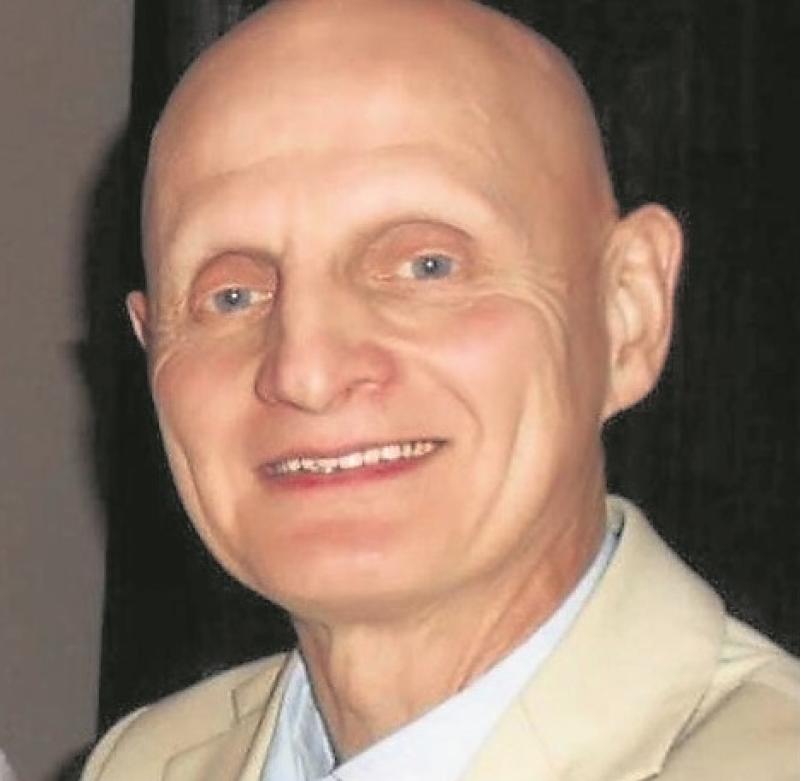 Though he had been ill for some time, these words in Irish which came through by text to us as we socialised in the Ring Lyne Bar and Restaurant on the evening of Thursday, January 23, 2020, carried with them a shocking and sudden poignancy.
They translate as “Gone, may God have mercy on his soul” and referred to Joseph Lynch of Chapeltown (Caol), Valentia Island, Co Kerry, and Rathangan, Co Kildare, who had passed away a few moments earlier in the Beacon Hospital of Dublin.
The terse message was sent by a close relative at his bedside and soon spread like wildfire through the bar of the Ring Lyne of his native and beloved village of Caol.
Always referred to in Valentia Island as ‘Joseph’, he was born in Marian Year 1954 and was the son of late parents Jerh and Ellie Lynch of the village of Chapeltown (Caol).
He was pre-deceased by his brothers Michael and Sean.
Jerh and Ellie Lynch operated a grocery shop in the village in association with a shoe making and taxi driving business.
That village, resting in the restful lowlands of the centre of Valentia Island off the South West coast of Kerry was a vibrant place in Joseph’s youth with five grocery shops, a pub, a Post Office, butcher’s outlet and creamery.
The chief outdoor pastime was the constant playing of Gaelic football in the GAA field adjacent to his house as well as numerous outdoor games, along with catching trout and eels in Caol River which ran through the village.
Children played and ran in and out of each others’ houses like mice and it was an era when most mothers were always at home in a village which operated like one big family unit.
It was a good place for Joseph to grow up as he sported and played on the banks of his beloved Caol River and pursued his great passion for wildlife and general nature. His summer days were also spent swimming in the nearby sea at a place locally and fondly called ‘The Bottom of The Road’.
Having completed his primary education in the nearby Ballyhearney National School, he pursued his secondary education in St Augustine’s College, Dungarvan, Waterford and later Cahersiveen CBS.
He went on to complete his training as a Primary School teacher in St. Patrick’s Teacher Training College, Drumcondra.
In 1975, he obtained a teaching post in Rathangan, where he was to spend many happy years in that short grass county of the plains of Kildare.
He and his wife Eileen (nee O’Sullivan, Ohermong Renard, Co. Kerry) married in 1984 bringing up their three children, Cilian, Donnachadh and Dorarca there.
That land locked area of different beauty was to be a big change from the rugged seascapes of his native Valentia Island, but he very soon adapted becoming acquainted with locals in quick time .
This writer never feared for him in such a capacity as he was always a determined, tenacious individual who loved mingling with people, loved the gregarious goings on of the group or team and had a passion for folklore, history, genealogy, the Irish language and the cut and thrust of debate and argument on current affairs.
He was never one to shirk a challenge.
In 1993 he and Anthony Lynch of Rathangan (no relation) co-edited the Rathangan GAA Year Book in which he wrote: “ I had heard of Rathangan from my childhood, through John Dennehy, my neighbour and great friend of my father’s who called to our house every Christmas to discuss and argue about the latest Kerry team or the state of football.”
(John Dennehy, in company with other Valentia Islanders, had emigrated to Kildare in the 1940s to work with Bord Na Mona. He also resided in Rathangan).
Joseph brought with him to Rathangan a very strong Kerry GAA pedigree. He won a South Kerry minor championship medal with Valentia in 1972 and in later years was a very determined and tenacious wing back for Valentia, playing at a high level in the domestic scene. His brother Diarmaid (Darby) was a tough, uncompromising corner back and another brother, Sean, also played prominently as a forward.
Sean, domiciled for many years in Muff , Co Donegal as a Customs and Excise Officer, founded the St Patrick’s GAA club up there. He was honoured there last October when the club’s stand was named to his honour.
Ger, the youngest of the brothers, was the wing back on the Kerry three-in-a-row All-Ireland winning team of the ’84-’85-’86 years, who also won a National League medal and an All-Star.
On taking his teaching post in Rathangan, Joseph took a keen interest in the St Patrick school’s under-age structure, training and coaching under-age football teams and many of his successful teams of the early eighties formed the nucleus of the successful under 21 team of 1991 (winners of the Kildare under 21A final) and the subsequent seniors.
Bonfires blazed in Rathangan that night in jubilant celebration of the under 21 victory with more unbridled joy to follow as he trained the team to county intermediate success in 1993.
The club then went senior and under his watch reached the quarter final of the Kildare senior championship in 1998, losing to Sarsfields. His time with the seniors concluded at the end of the nineties.
His senior activities also went beyond Rathangan when at varying stages he trained Monasterevin and Robertstown and also Clonbullogue and Bracknagh of Offaly. He also trained the Rathangan ladies from 2010-12.
Joseph became Principal of the St Patrick’s boys’ primary school in 1989. While teaching, he pursued a Masters degree in Education at Trinity College as he was very conscious of assessing his pupils’ needs on an individual basis regarding their varying aptitudes, talents and needs in learning and expressing themselves.
Having discussed this topic with him on numerous occasions it was very clear to this writer that he was consumed by and very committed to this.

His retirement in 2010 afforded the chance to devote more time to his passion for woodwork, his love of nature and bird watching in the Bog of Allen, Rinn Na gCapall in Renard and the wider Valentia and Iveragh area. It also afforded him more time to pursue his love of general and local history as well as genealogy.
He left a fine legacy of the Lynch family tree to his relatives and extended relatives in Ireland, England and the USA and helped many people in historical research. He was also involved with Hibernia as a supervisor of students on teaching practice.
Joseph got immense satisfaction with the opening of the brand new state of-the-art 12 classroom boys’ national school in Rathangan which occurred on Thursday November 5, 2015, and the Leinster Leader of the time wrote:
“Principal Sean Begley said the project would not have got off the ground but for former Principal, Joe Lynch. He said that, back in 2007, Joe asked Padraig Doyle to carry out a survey on the projected population growth in the area for the next ten years. This showed there would be 320 new pupils needing places in 2017. It was thus decided that Scoil Naomh Pádraig and the girls’ Bunscoil Bride needed new buildings to accommodate the extra pupils.’’
It must be noted that he had endured an illness for the past 30 years of his life.
Though a busy man he never gave in to it and carried on as normal. His admirable mental resilience and sheer determination borrowed time for him, carrying him through all those busy years.
Huge crowds came from various parts of the country to attend the wake at his residence in Rathangan with the parish church full to capacity for his requiem mass. His son Donnachadh rendered the eulogy.
The GAA club personnel led the hearse from the Boys’ School to the church with a guard of honour outside the church in place by the primary school children.
After his funeral Requiem mass on the following day, the GAA accompanied the hearse through the village and past the bridge in a final farewell to Joseph on his last journey home to Valentia Island.
It was his final crossing of that bridge which he had done so often in the past on his way to Iveragh. Local people had never seen anything like it.
The hearse arrived to his beloved Chapeltown (Caol) on a cold January night and stopped outside his home and the adjoining GAA O’Connor Park. Then the Valentia Young Islanders GAA club personnel marched beside the hearse as it made its way to the church of Saints Dorarca and Teresa.
A huge number offered their condolences with the line of people extending from the church out to the road and back on to the bridge in the centre of the village.
It was the last pre-Covid funeral in Valentia and one of the biggest ever seen there.
On the following day his removal took place to the Daniel O’Connell Memorial Church, Cahersiveen, where Requiem Mass was celebrated.
A very fitting talk on his time in Rathangan was given by his great friend of that place, Raymond Conlon.
His cremated remains were laid to rest in Holy Cross Cemetery, Cahersiveen.
Seosamh Ó Loinsigh: Fear oideachais, fear nadúir agus na n-éan, fear staire agus bealoidis, fear taighde, fear na gaeilge, fear caide agus bainistióchta, fear comhluadair agus comhrá, fear siúinéireachta.
Dairbhreach go smior agus fíor Chiarraíoch a bhí ar a shaímhín só i measc muintir Chill Dara. Mo chara dilís i gcónaí. Beannacht Dé leat.
Sincere condolences to his wife Eileen, sons, Cilian and Donnachadh, daughter Dorarca, grandson Iarfhlaith, daughter-in-law Cristíona brothers Diarmaid and Gerard, sisters Derarca and Cautie, nieces, nephews, sisters-in-law, brother-in-
law, extended relatives and his many loyal friends.