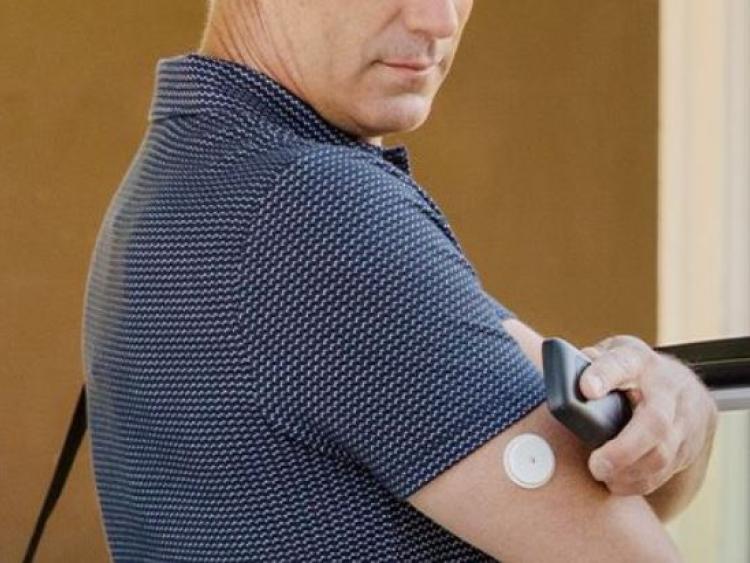 A Newbridge man has discovered how a glucose monitoring system has revolutionised how he cares for his 82-year-old father who has Type 1 diabetes.

Robbie Ryan’s father Christy has been living with diabetes for over four decades.

Chronic
Diabetes is a chronic condition that affects over 5% of the population in Ireland.

Life changed for Christy in spring 2019 when a neighbour went to check on him and found him collapsed on the floor.
When paramedics arrived, they said his blood sugars were so low he might have been just 10 minutes away from slipping into a coma.

After this episode, Robbie knew the best thing for his father was to live with him.
Since then, Christy has been using the FreeStyle Libre system made by US medical devices giant, Abbott.

Having used the system to manage his diabetes for almost two years, Christy said he is seeing huge improvements in his diabetes management.

His blood glucose control over recent months, is in the target range, perhaps for the first time ever, according to son Robbie.
If blood glucose levels are not controlled, older people can be more susceptible to hypoglycaemia which can cause dizziness, headaches, confusion, shaking, blurred vision or personality changes.

Despite being partly made in Ireland and used by more than two million people with diabetes across 50 countries, many Irish patients are unable to access this life-changing technology because Ireland is the few countries in the world that only reimburses the system for patients up to the age of 21.

Robbie said: “Giving the FreeStyle Libre system only to younger people doesn’t make a whole lot of sense to me.
“Diabetes is a lifelong condition, not something that only affects you when you’re young.”
The monitoring system has also proved especially useful during the Covid-19 pandemic.

Robbie added: “We’ve been able to share the glucose data remotely with his care team in Naas General Hospital.
“We can discuss his diabetes with his consultant over the phone and all of the data is right there.”