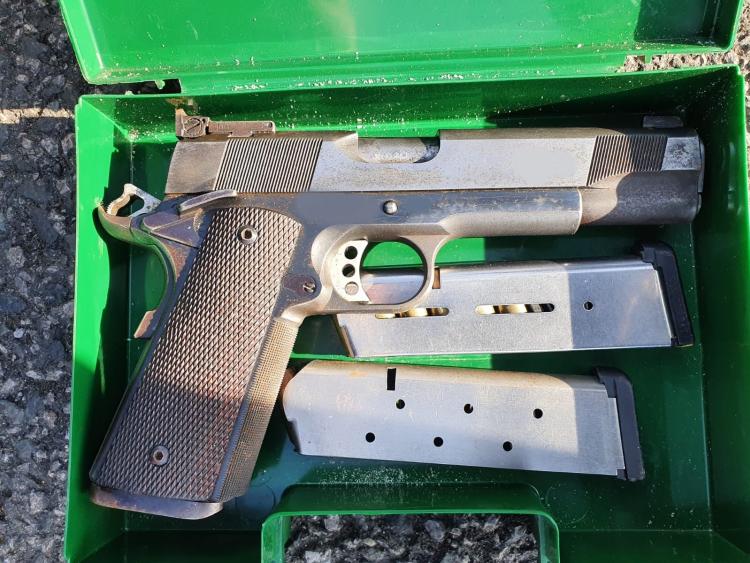 A gun, ammunition and cannabis herb worth an estimated €40,000 has been seized in an organised crime operation in Baldonnel, close to the Kildare/Dublin border.

At approximately 4.30pm on Saturday, April 17, in the course of ongoing investigations targeting persons suspected to be involved in organised crime, personnel attached to the Garda National Drugs & Organised Crime Bureau (GNDOCB) supported by the Emergency Response Unit intercepted a vehicle in the Baldonnel area of West Dublin.

Two men, aged 47 and 25, were arrested on suspicion of involvement in possession of firearms and ammunition, contrary to the provisions of the Firearms Act, 1964, as amended. Both are currently detained, pursuant to the provisions of section 30 of the Offences Against Act 1939/98 as amended, at Clondalkin Garda Station.

Speaking today Detective Chief Superintendent Angela Willis who is head of bureau at the Garda National Drugs and Organised Crime Bureau said: "We continue to target those causing most harm and devastation in our community. The seizure of a firearm, ammunition and a sizeable quantity of controlled drugs will, we believe, contribute to the disruption and potential ultimate dismantling of particular organised crime groups that we continue to target, for the purpose of keeping communities safe."