Revitalised Kilcullen Tennis Club set to reopen on May 1 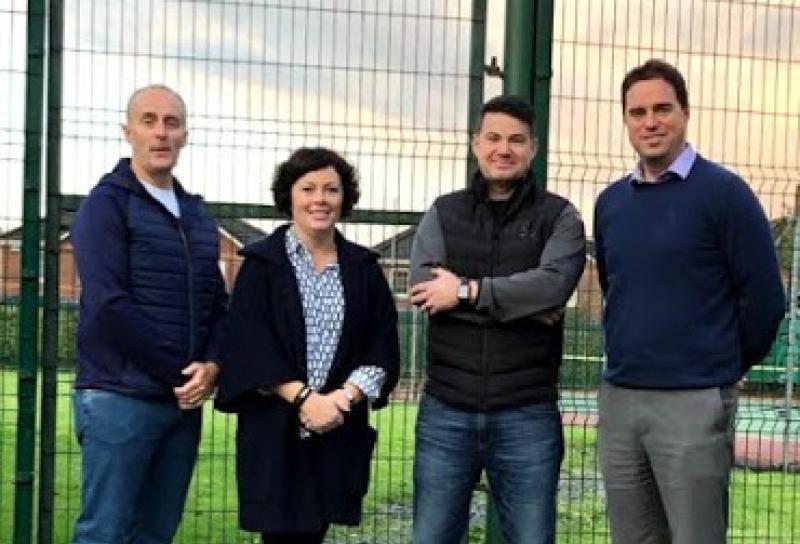 Kilcullen Tennis Club is to reopen its doors on May 1, in line with government Covid-19 regulations, with a brand-new improved club for all ages and abilities.

The Logstown-based facility was originally formed in the 1950s. It was relaunched in 2017 when a small group of committed volunteers organised the funding and resurfacing of two of the courts with a basic but functional tarmac surface. In recognition of his role in the club’s establishment,  Pat Lynch, a native of Logstown has been presented with a certificate of appreciation and honorary membership of the club.

Sports Capital Programme funding of €66,000, granted in 2019, has since enabled its transformation into a leading three court club, with top of the range playing surfaces. Plans are underway to have two of the courts floodlit by this autumn.

The club is flourishing with over 170 members, many of whom have never played tennis before but have grown to love the game and the chance to make friends in the community and learn to play or get back to tennis. The club has the capacity to grow to 300 tennis members.

Coach Cormac Doherty has guaranteed to make the club his priority, and is available to run group coaching for all levels and to train those who wish to compete. This training will strengthen the teen club in particular.  Coaching for children and teens begins on Saturday mornings from May 8 and will run for eight weeks, with no experience necessary.

Over the next five years the club aims to achieve the objectives set out in the 2018 development plan. Planning permission has been sought and granted to build one court and upgrade two courts to all weather surfaces, two with floodlights and all with adequate width and access to allow for the hosting of interclub/ inter school competitions.

A sports capital grant application was submitted by Club Development Officer Gerard Miller last March for stage two of the plan, which will include the refurbishment of the clubhouse, with plans for a future table tennis club.

The committee sees KTC as the affordable, inclusive tennis club of choice within the local community for players of all abilities and ages.  They have ambitious plans to further develop Kilcullen tennis club into a community-centered sports club and to work with KARE in providing tennis lessons for people with disabilities under the Enjoy Tennis Programme run by Tennis Ireland.

Membership is now open and new members can avail of the offer of 15 months membership fees for the cost of 12 if they join now.  For more details, please email email ktcmembershipmail@gmail.com or find the club on Facebook or Instagram.