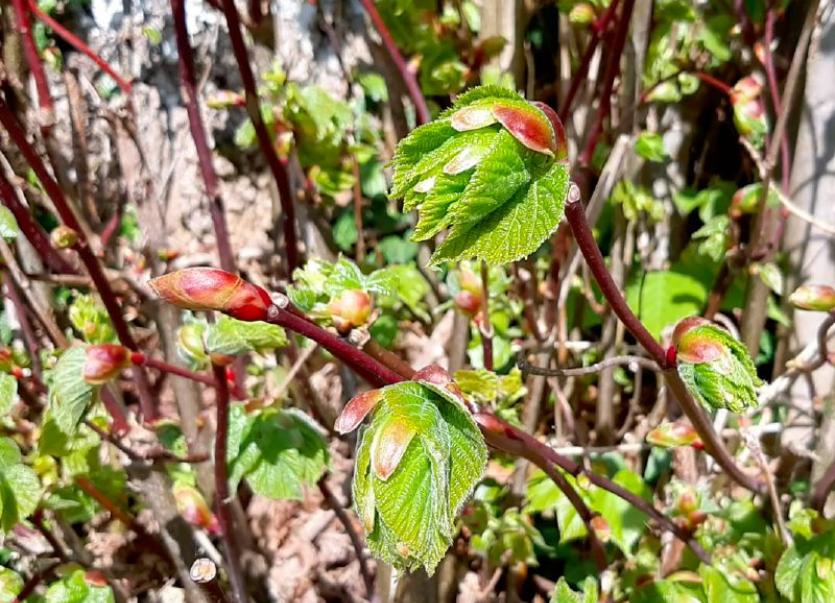 A tree that is regularly planted in our urban towns and communities is small-leaved lime (aol beag sceite as Gaeilge).

Although native to the UK and most of Europe, this tree is considered introduced to Ireland. It was chosen as a species to plant in urban areas due to its stature, its fragrant flowers and its bright foliage. It can typically be found growing along avenues.

It is believed the small-leaved lime tree can live up to an impressive 1,000 years. At this time of year you can identify it from its stems and emerging leaves.

The leaves burst from a reddish bud, and once fully opened the leaves are heart shaped with rounded lobes, a pointed tip and toothed edges.

The bark and branches are smooth and grey. The wood is soft and light in colour, and was used in furniture making. The tree is known to produce suckers from the base of the trunk, which makes it easy to access to identify at this time of year.

The flowers are white-yellow, five-petalled and bloom in June. They hang in clusters of between four and 10, and share one stalk.

Although the small-leaved lime is not native to Ireland, the leaves are a favourite of many moth species, including the pale tussock moth and lime hawk moth, which was only first recorded in Dublin in 2010, according to Moths Ireland.

This tree is also important for other wildlife species, including bumblebees and other pollinators who enjoy the nectar-rich flowers.

Aphids, which are attracted to the tree, provide a source of food for hoverflies, ladybirds and birds. The small-leaved lime can be sticky, and while you may believe this to be an excretion from the tree, science has shown that this sticky resin is actually discharged from the many aphids that are attracted to it.

If you would like help identifying local wildlife or indeed to share your images of local wildlife encountered to be used in a future Wildlife Watch contact me on 045 860133 or bogs@ipcc.ie.