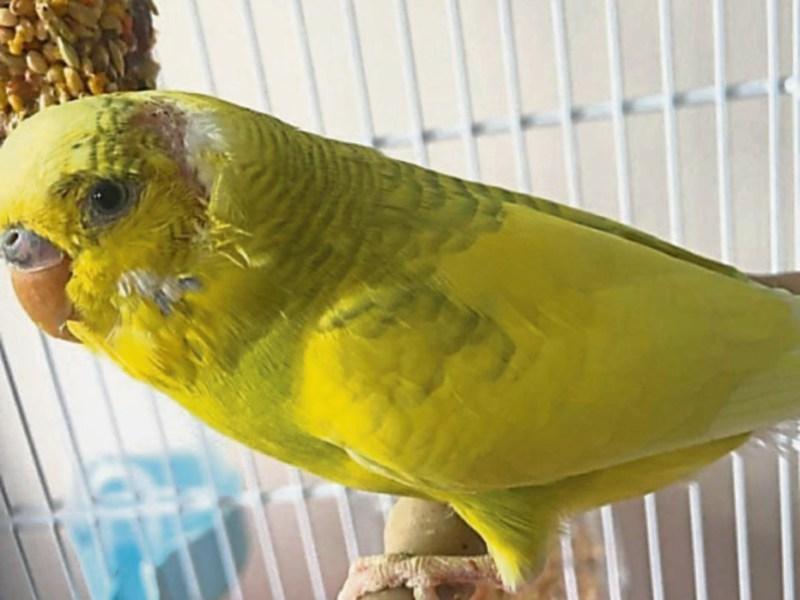 This is Franklyn, the lovely and lucky budgie. A few weeks ago he was attacked by a seagull. Only for the quick response and courage of some students from St Conleth’s Community College in Newbridge, he may not be alive today.

He had lacerations to his head and part of his tail was missing. He was taken in by Shauna Byrne, volunteer animal welfare officer, who is based in Athy and works closely with the KWWSPCA.

Shauna said that very often small birds who are attacked will die of shock. She used her huge compassion for animals and her experience to nurse Franklyn back to good health.

We asked Niall Hatch of Birdwatch Ireland why the seagull attacked this budgie. He said that, quite simply, the seagull saw the budgie as a nice meal. He once witnessed a seagull swallow a small puffin in one go.

He said “because the budgie would have lived in captivity he may have been naïve around other birds and didn’t see the danger. It is also possible that the budgie flew close to the seagull’s nest and they are hugely protective of their young. Franklyn’s bright colour would have made him stand out.”

Seagulls have been in the news recently for aggressive behaviour but Niall defends them and says that we humans are to blame for this behaviour.

“If somebody feeds a seagull a chip in Stephen’s Green, the bird will naturally return for more, and its aggressive swoop will cause people to panic.”

Natural seabird colonies around the coast of Ireland and on small islands are being continuously disrupted by people visiting them and frightening nesting birds.

For better protection, seagulls move to towns and cities, and nest in the roofs of tall buildings where they feel safer and can protect their eggs. Niall feels very strongly that we are upsetting their natural ecology. Ireland does not enforce laws in protecting these seabird colonies. “We are to blame for this problem, not the seagulls and the simple solution is, don’t feed them”.

Franklyn was kindly adopted by one of the teachers from St Conleth’s Community College and is now enjoying a quiet life, looking out the window at the seagulls.

The Kildare & West Wicklow Society for the Prevention of Cruelty to Animals (KWWSPCA) is a Registered Charity which investigates and deals with reports of cruelty and neglect to animals, family pets, wild animals and birds, horses and ponies, throughout County Kildare and West Wicklow. The Society is run entirely on a voluntary basis, there are no paid employees. Charity Number, CHY 6280; Helpline: 087 1279835; Email: kwwspca@gmail.com; Website: www.kwwspca.ie. Follow us on Facebook.