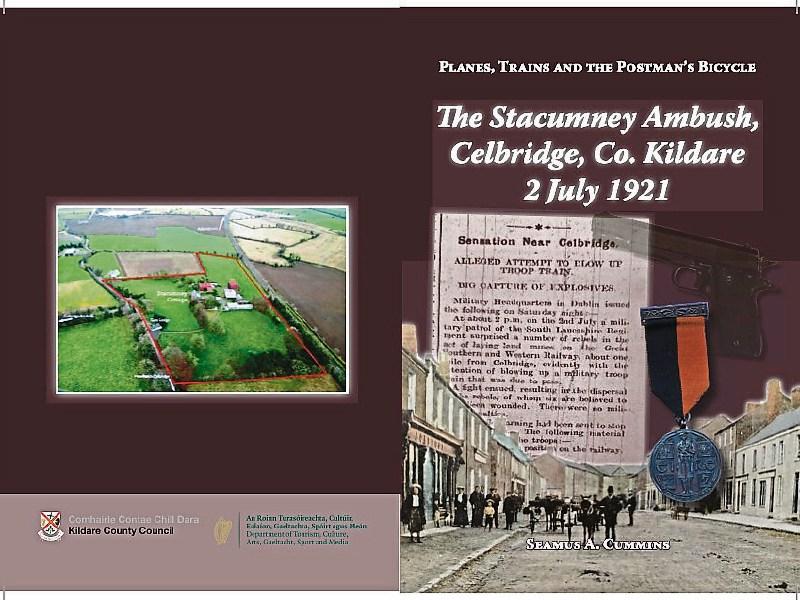 The front of the free booklet, available at libraries

Planes, Trains and the Postman’s Bicycle. The Stacumney Ambush, Celbridge, Co. Kildare, 2 July 1921 is a new publication which has been produced as part of the County Kildare Decade of Commemorations programme 2021. The booklet was researched and written by Celbridge local historian, Seamus A Cummins, to mark the centenary of the ambush. It gives an in-depth analysis of the troop train ambush.

“We decided that if we were caught with the rifles, there would be no hope for us, but without them we might have a chance…”

By the summer of 1921, the Irish War of Independence had reached its pinnacle. Both the IRA and crown forces were war weary, with neither side having succeeded in delivering a definitive blow. Behind the scenes negotiations were taking place to bring an end to the conflict, and it was anticipated that the IRA would mount attacks to inflict damage to the British side to strengthen their hand at the negotiating table. On July 2, 1921, at Stacumney, near the town of Celbridge, Co Kildare, the IRA planned to derail a British troop train returning to the Curragh Camp after the opening of the new Northern Ireland Parliament.

Seamus explores the key personalities involved in the operation, the challenges they encountered and its aftermath.

The booklet contains a foreword by Michael Murphy, of the Teresa Brayton Heritage Group, as well as a list of all those who took part in the ambush, the eye-witness account of Robert Henry Wardell who was a 10-year-old at the time, and a selection of photographs donated by relatives.

The booklet is available free in Celbridge, Kilcock, Leixlip, and Maynooth libraries.