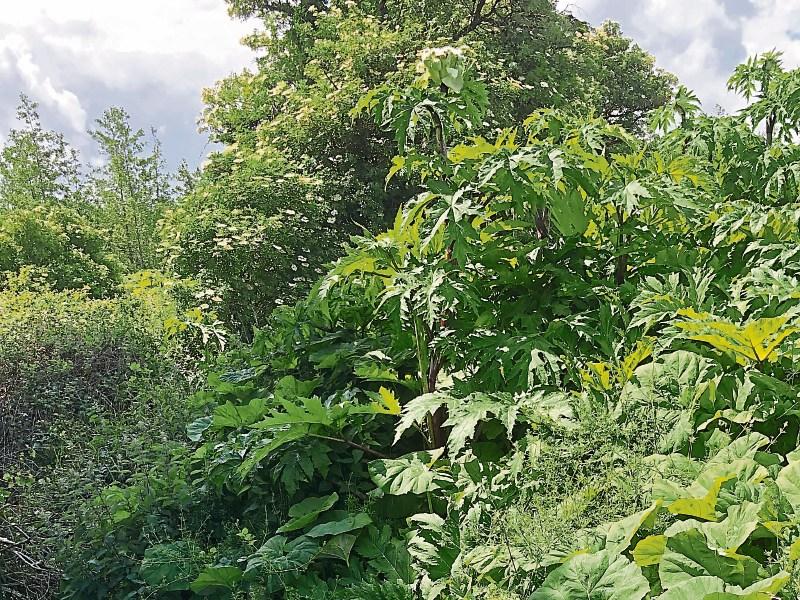 Giant Hogweed growing along the Tully Road in Kildare town

Kildare County Council has been urged to tackle Giant Hogweed within the county before it gets out of control.

The invasive plant can grow to over five metres in height is mostly found along footpaths, river banks, cemeteries and waste ground.

Hot and humid weather over the past month has seen ideal growth conditions for Giant Hogweed and it was witnessed growing alongside the Tully Road in Kildare town this week.

TV nature expert Eanna Ní Lamhna said sap from the weed can damage the skin which makes it susceptible to blistering or burns.

She said: "This invasive plant shouldn't be given any foothold because it will grow and grow and became a nuisance.

“Local authorities should act quickly and hire specialist contractors with protective clothing and the right equipment to deal with it."

Ms Ní Lamhna, who has published a new book Our Wild World, explained that the plant can grow unimpeded as it monopolises the soil around it not allowing anything else to thrive.

Its seeds can travel on the wind and in water, meaning that it can populate areas relatively easily in the right conditions.

The plant also pushes out native flora and and also lead to river bank erosion and an increase in flood risks.

The plants are native to China but were introduced to Britain and Ireland as an ornamental plant in the 19th century.

In the UK,  it's against the law to plant it in the wild while in the US, and it is an offence to import it into the country.

Hogweed shouldn't be cut by hand unless full protective clothing is worn to prevent skin contamination by the sap. Ms Ní Lamhna said Giant Hogweed is one of several invasive non-native plants we have to deal with every year such as Rhododendron, Himalayan Balsam and Japanese Knotweed.

Meanwhile, as part of the The National Biodiversity Local Authority Biodiversity Grant Scheme, Kildare Co Council was recently awarded €14,500 by Minister of State for Heritage Malcolm Noonan for the control of of the invasive plant - American skunk cabbage (Lysichiton Americanus).

A total of 82 sites of American Skunk Cabbage have been identified and mapped along the River Liffey in Kildare by researchers from UCD.

The Council aims to work with UCD to control the plant along the Liffey using mechanical and chemical methods while monitoring and assessing the best control techniques.