How the Leinster Leader reported the 1921 War of Independence truce 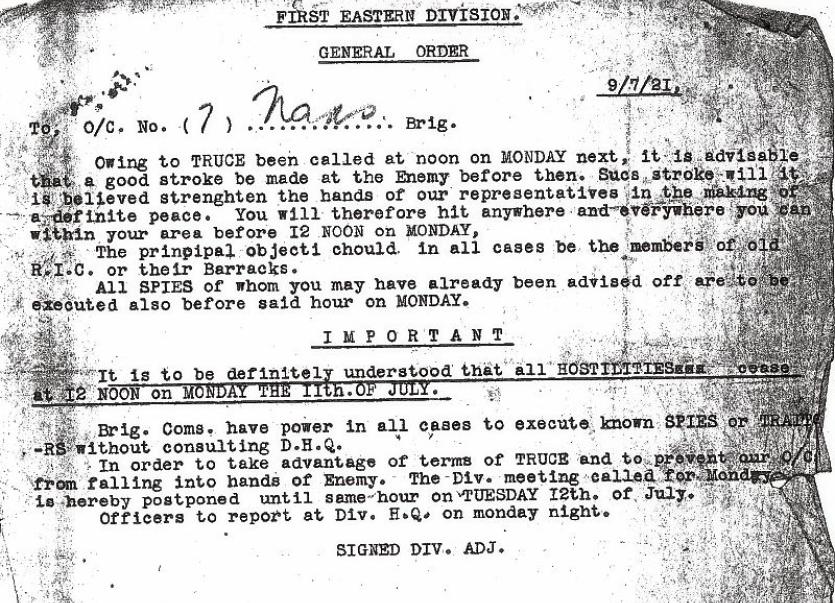 The dispatch sent to the 1st Eastern Division on 9 July, 1921, received at Naas

A truce between the Irish Republican Army and the British crown forces came into effect at 12 noon on Monday, July 11, 1921, heralding the end of the bloody War of Independence. Here is how the Leinster Leader of the day reported the truce and subsequent events. 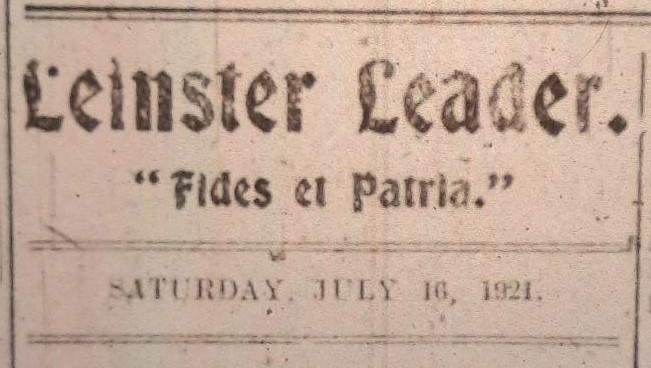 The last week has been the most fateful in Ireland for the present or prevailing generation. As we have said all along chickens should not be counted until all the eggs are hatched. Disasters which would have overwhelmed many a less virile race have chased each other across the face of our history during the seven or eight centuries of our attempted subjugation, but though the inhabitants of a country may be changed and its very physical formation altered a belief or a conviction is imperishable. And, of course, that is what happened with us. We are even less like the English people to-day than we were when they first attempted to assimilate us. Leaders of political parties, no doubt, possess a magician’s wand. They can alter circumstances at will. Indeed like a visitation of a flash of lightning, tragedy and gloom in Ireland have been changed to mirth and light; where yesterday all was doubt and darkness, is to-day renewed confidence and hope; with at the back of all a determination to do and dare all once more should our motherland again call us to duty…

Residents in Athy were startled on the same night by hearing a number of fire arm discharges in the vicinity of the local R.I.C. about 1.45 a.m. The County Kildare incident was considered peculiar in view of the new regime of peace and harmony. It is stated that subsequent investigations resulted in adequate dealing with, of those who were responsible for the disturbance of the peace.

On Sunday night in a district in the vicinity of Athy, it is rumoured that three parties of police in charge of a sergeant raided several houses in the district, with the object, presumably of finding whether the houses concerned contained I.R.A. military stores or whether anyone who was wanted was sheltered therein. Their investigations proved fruitless.

On Monday night last the coming into operation of the truce, was made the subject of jubilation in Athy and district. In the town itself the satisfaction of the people was manifested in the unmeasured terms at the cessation of hostilities between the two governments. The juvenile section of the community, especially, showed their pleasure at being permitted to roam the streets at will, even though they could not appreciate the truce in its broader sense.

Bonfires were in evidence in various places and were surrounded by joyous crowds of singing people, even though the songs chosen in some cases could not be classed as appropriate. The singing was of an orderly nature and solos were accorded applause in every case. Parties of both sexes marched up and down trough the town cheering vociferously. At about midnight the people left the streets, there being but few in evidence there afterwards.

At about one o’clock the residents in Duke street state that a young man that was gifted with a beautiful voice, sang a song commemorative of the late Kevin Barry and to whom they awarded the “branch” for this vocal entertainment. They state that his voice could be heard in all parts of the town, the night being very still, and there being not a sound while the song was in progress.

Intense indignation was excited in Monasterevan by the action of some passing soldiers late on Wednesday evening week. While a number of children and a few elders were enjoying a bath in the River Barrow near the town no less than 20 rounds were fired from a machine gun on a military lorry passing towards Portarlington. Happily, though there were several narrow escapes, no one was hit.

On Saturday last a number of military made some searches in the Curragh-Newbridge area. Several cars were held up and passengers searched on Saturday evening.

Several armoured cars passed through in the Curragh direction some hours before the peace moment opened. They were fully armed and rifles were to be seen emerging in the usual way.

Messrs. M. Byrne and “Guss” Fitzpatrick, Naas, have been removed from Hare Park to the Rath Internment Camp.

The armistice has been splendidly observed on all sides throughout Kildare. When in Celbridge one could see everyone on the point of extending congratulation, and the same may be said all round.

In Droichead Nua and in Kildare areas there was a very good feeling shown and not the slightest matter occurred to mar the peaceful air which was evident from the moment the entry of peace had been made. Everybody seems hopeful that a good and happy solution will be found and that the question which has been the source of so much strife for centuries in Ireland will be settled to the satisfaction of the people.