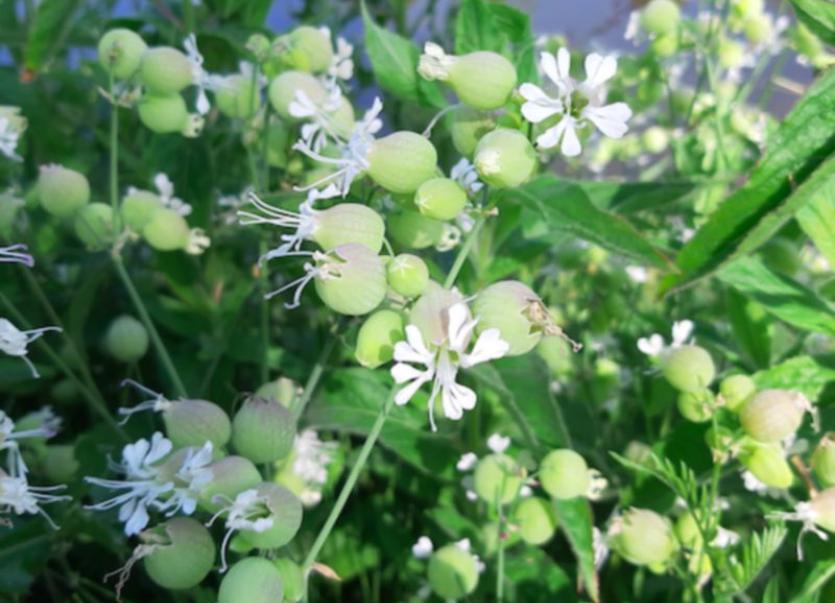 Bladder Campion pictured on the banks of the canal in Monasterevin. Picture: Nuala Madigan

I always say that learning about the variety of wild flowers and animals in our natural world is a life long learning process.

Even though I work with a conservation organisation and facilitate habitat and biodiversity related educational talks, I will be the first to admit I don’t know every single wild plant and animal that call this island their home.

This week was a good example as I was introduced to a native species that I had never encountered before, Bladder Campion (coireán na gcuach as Gaeilge).

I found this plant growing along the banks of the Grand Canal at Monasterevin in Co Kildare and, on reading a little information about it, I learned that it is typically found growing nationwide, particularly in coastal areas but also inland in well drained soils such as grassland, hedgerows and canal bank edges.

The plant gets its name as behind the delicate five white deeply divided petals there is a bulge. This bulge is actually the calyx of the flower.

According to www.wildlifeofireland.net this is the part of the flower made up of sepals. The sepal of a flower is the protective outer covering that protects a bud — they are often green in colour.

Bladder Campion can reach a height of 80cm and the stem and leaves are hairless and light green/greyish in colour.

Apparently, in Spain and Crete older leaves of this plant are chopped up and eaten in salads and omelettes. I have never heard of it being used in Ireland as an edible plant and even if it was I would still be recommending to never pick and eat a wild plant that you are unfamiliar with.

At night it is said that Bladder Campion smells like cloves and is an important plant for attracting night flying moths.

This was a new species for me this week — will you find Bladder Campion in your local area?

If you would like help identifying local wildlife or indeed to share your images of local wildlife encountered to be used in a future Wildlife Watch column, contact me on 045 860133 or email bogs@ipcc.ie.