Back to life: Restoration project on track after being hit by Covid and Brexit delays 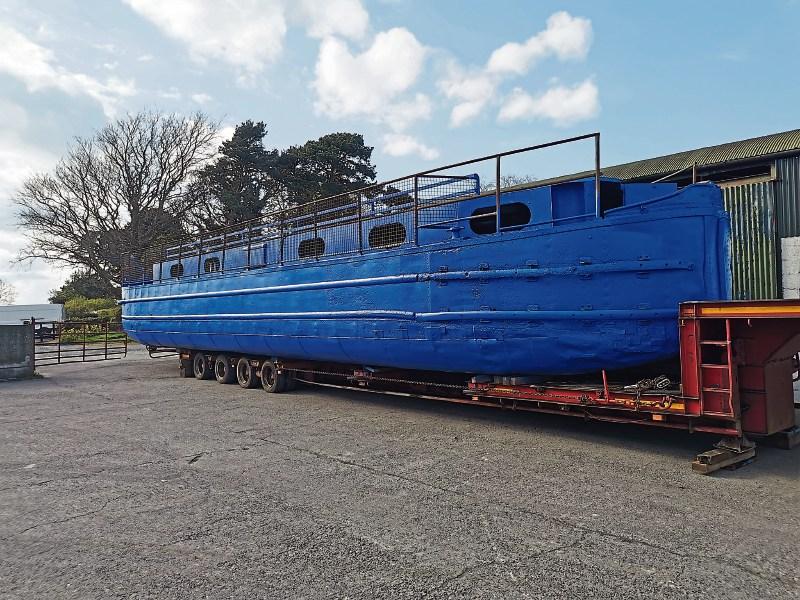 A historic Robertstown barge, which was rescued from the bottom of the canal at Lowtown two years ago, has moved one step closer to being put back to use as a café.

“With the emergence of pop up coffee shops and the Blueway set to come through Robertstown by linking with Lowtown, we feel there is a fantastic opportunity for someone to come on board with us, pardon the pun, and open up a coffee shop. There is no coffee shop in Robertstown,” said Peter Dunne, chairman of the Robertstown Community Amenities Association.

He explained how the project experienced Brexit related insurance and Covid imposed delays over the past two years.

“However, the project is now gaining momentum and it is hoped to be completed by the end of the year — thanks to the continued support of Bord Na Mona Drehid and Kildare Leader Partnership. We are very thankful for their support.

“It is a difficult and risky project. One wrong cut during the restoration and the barge could be damaged and it might not be able to be repaired, or it could become economically unviable,” he said.

He explained the main body of work entailed rebuilding the bow and this is now complete. Pointing out this is the ideal time to pin down its use before the internal fit out takes place, Peter is urging interested parties to get in contact.

With a tight budget of €120,000, the work has been painstaking and the barge is currently in Athy. Over the course of its 91 years the barge, named 52M, has been sunk twice and carried everything from porter, sand, gravel and even the Roses of Tralee.

In 1959 it was bought by Roadstone. It sank in Waterford in 1969 and was purchased for €350 by Robertstown Muintir na Tire. In the early 70's it was re-named the Eustace and used for days out, weddings and a film starring Gabriel Byrne. It's hoped the restored 52M can also be used for heritage displays and community uses. Anyone who would like to express their interest can contact the group on the Robertstown Community Amenities Association Facebook page or email robertstown communitygroup@gmail.com