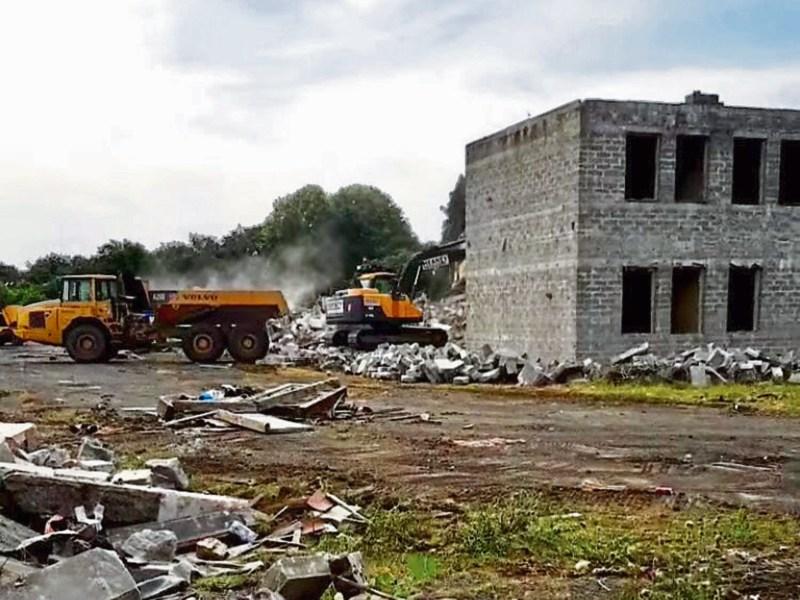 Demolition of a number of derelict buildings in the Magee Barracks complex in Kildare town has taken place in recent days.

Heavy machinery moved onto the site last week and has been working away at dismantling concrete walls and transporting the rubble.

Two separate developments which require demolition have been granted planning permission for the ex-military site.

Planning permission was granted in 2019 to Ballymount Properties Ltd for 375 new homes and a creche.

This includes the demolition of 17 buildings including a range of former barracks buildings, the Officers’ Mess building and a water tower structure.

A state-of-the-art €100 million cancer treatment clinic has also been approved for the site and is being promoted by Londsale Ltd.

According to the planning conditions, the developer must pay a special contribution for traffic calming works in the vicinity.

Londsale was also given permission to demolish six buildings on the site in order to build the cancer treatment facility within a 2.5 hectare area.

Magee Barracks was the site of a British Army barracks since the early 1900s and subsequently was a depot for Garda Síochana in the 1920s.

A new barracks was built on the site in 1938 and was named after gunner James Magee who switched sides and raised the Irish flag at the Battle of Ballinamuck in September 1798. Magee was later captured and executed by British forces.

In 1996, there were approximately 165 army personnel and 30 civilians employed at the barracks but the facility closed in 1998.

The barracks was later used as a reception centre for Kosovar refugees and asylum seekers.