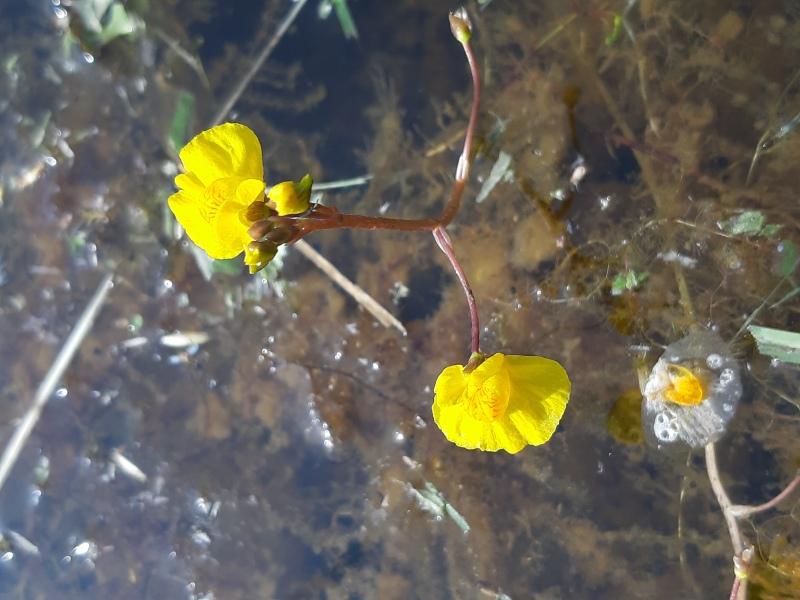 Last week at the Bog of Allen Nature Centre the surface of one of the constructed wildlife ponds in the wildlife gardens was covered in a bright yellow flower that had burst into bloom. This small yellow flower belonged to bladderwort (lus borraigh beag as Gaeilge). Bladderwort is one of Ireland’s three insect eating plants — however, unlike the sundew and butterwort, which are confined to peatland habitats, bladderwort can be found in freshwater habitats around the country including your garden pond!

Both the sundew and butterwort use glue to trap and eat insects.

Two species of sundew are found in Ireland, the long-leaved sundew and the round-leaved sundew. Each leaf of the sundew has 200 tentacles which excrete a drop of glue. Unsuspecting insects that get too close become stuck. The leaf surface then slowly curls to create a ‘stomach’. Digestive jucies are released and nutrients from the insect are absorbed through the stomata in the leaves.

Once both the sundew and butterwort have taken as many nutrients as possible from their prey, the leaves will uncurl and the remains blow away in the wind.

The bladderwort lies beneath the water’s surface. Along its stem, it has tiny flask-shaped bladders. Once a tiny insect touches against these bladders, a trap door opens and the bladder becomes like a vaccuum, sucking water and its prey into the bladder.

The yellow flowers are held erect above the water’s surface on tiny stems in loose clusters, and the lower lip of the flower is turned downwards.

Will you find bladderwort flowering in your community this week?

If you would like help identifying local wildlife or indeed to share your images of local wildlife encountered to be used in a future Wildlife Watch contact me on 045 860133 or bogs@ipcc.ie.